Dieter: What's so urgent about

that White can postpone the basic instinct of 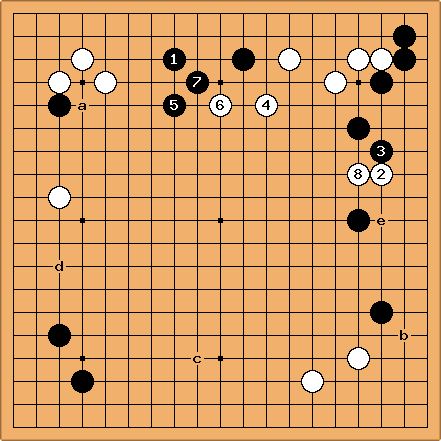 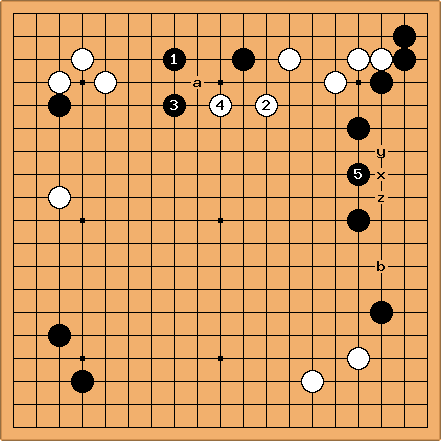 Klaus: I think, the first question we must ask ourselves is: Would Black play

in this diagram without the exchange at x, y?

It looks kind of slack too me!

If black would not choose that move, we must investigate, what difference the

exchange in the original diagram makes. But Black is stong here already, so it might not matter to strengthen him further.

is a little slow, and instead allowing the peep at a would make it a big mistake. Now note that the exchange White x - Black y doesn't help black a lot. (Black would now reply at z I believe.) Instead, it rather helps a white invasion at b. Anyway, I am sure Mr. Tenuki (Bill Spight) would like

in the original diagram :) 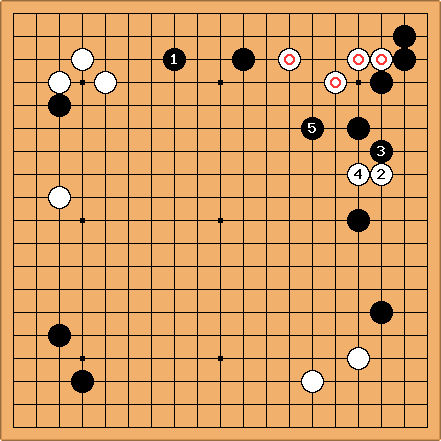 Andrew Grant: My guess as to what's happening here: If White plays

, Black has a powerful double attack on the marked group and the

group. White has to deal with the marked group first to avoid this. 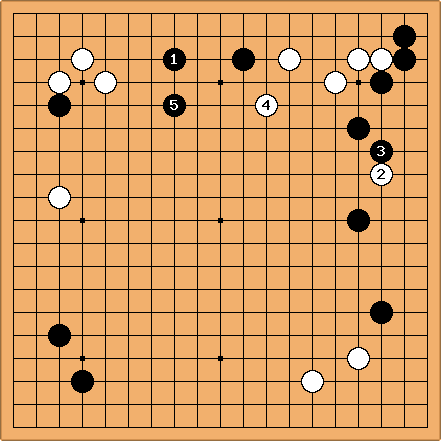 is natural, to avoid being surrounded - imagine a white stone on the point of 5. 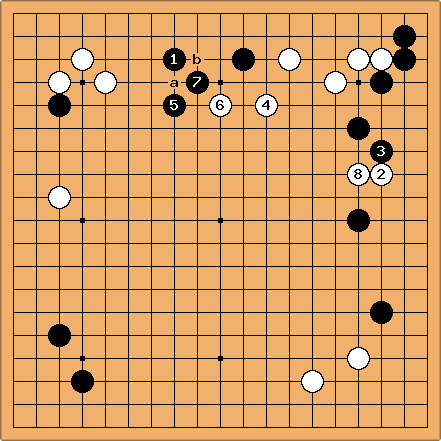 is a forcing move, threatening the peep at 7 (if Black connects at a, White plays b) which also helps White's top right group out to the centre. After this White can play 8 without worrying about the top right too much.

John F. Let me suggest a totally different way of looking at this. I infer that the original question means: why did Black answer at 5 (or 7) instead of taking the juicy looking point 8.

Under QARTS theory, Black's top group will be attacked and (having room for one eye) cause him damage to the tune of -10. It can hardly be said that Black 8 is worth 10 points in compensation. Black's thickness is nullified by the thickness White gets by attacking the top group, and territorially the extra Black area staked out by 8 on the right is far from secure.

Other points are that White's top group is weak and mustn't be allowed to settle, and Black's groups either side of 8 are either safe or light so there is no urgency here.

John F. If you are saying the usual 20 points less 5 or 10 because Black is rather weak below 8, I'd agree.

dnerra: Yes. For example white can pretty much make an eye in sente simple by sliding down the right side.

Also, Black 5 provides help to the lone Black stone on the left. This is a VERY common tactic - a move to the centre providing a sanctuary or safe haven for other groups to run to. Yet it doesn't have a name (does it?) and I think it should have. Anyone want to suggest one? A sanctuary stone? Or (topically) asylum centre?

Dieter: Tewari or not, everybody seems to agree that Black at 8 in the last diagram would be slow. If it is so slow, so unimportant, then why does White invade there in the first place with

I agree too, which is why I didn't expect

at all. So instead of questioning White's surrounding manoeuvers at

or Black's resistance at

, maybe we should find a reason for

dnerra: But protecting against an invasion is often slower and worth less than invading -- because invading tends to be sente; maybe better said as keeping the initiative, while as defending looses it.

TA?: Any chance this is a probe? 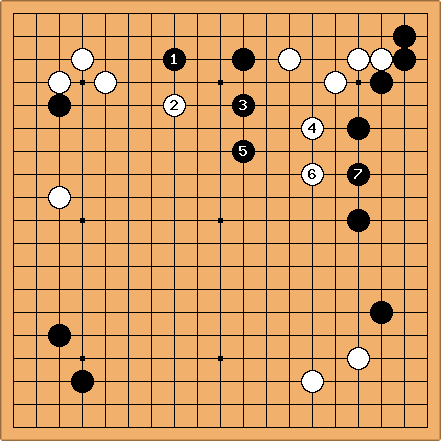 Bill: The top half of the board looks urgent.

is possible, enlarging White's moyo while attacking. But the flow through

is unattractive, as it solidifies Black's moyo on the right side. (I do not mean that

are all correct, I just mean to indicate in general the way the game might develop.) Black is thin on the right side. Better to invade there, even if doing so allows Black to reduce White's potential on the left side. I think thatAndrew Grant is right about

in the actual game. 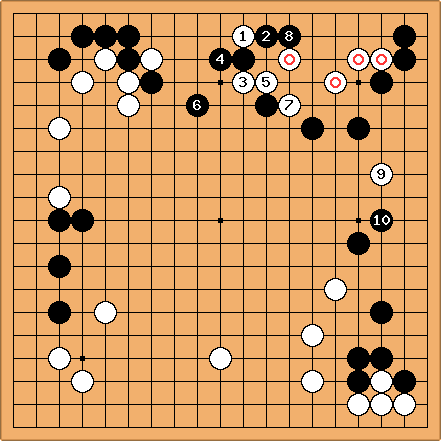 Velobici: On 28 May 2006, a similar configuration arose in the first game of the 20th Tianyuan Title match between Gu Li (White) and Zhou Ruiyang (Black). The order of play on the outside is reversed. Gu Li chose to strengthen his weak group on the top (marked white stones), then played

striking at the weak point of the black group in the upper right. Its very interesting game; the fight that develops in the upper right determines the result of the game (my idea...have not seen a commentary).