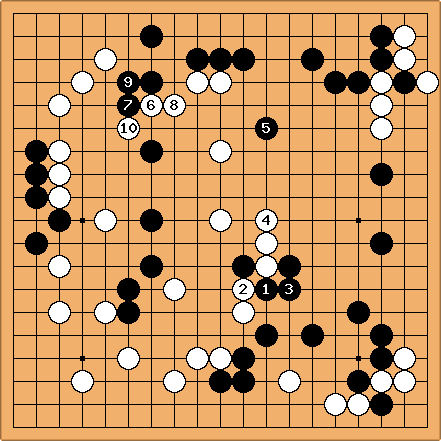 Scartol: As I look at my earlier moves, I realize that I didn't follow through with my plan. I planned to attack the 54 group, but then I gave that up when I realized I wanted to defend the right side middle space. Black 71: So now I'm planning to give up the stone that started this attack, and just join 71 to 69. Unless my opponent causes trouble and splits those, in which case I'll join 71 and 67.

HolIgor: White 72. There is nothing else to do.

Scartol Black 73: I hate to abandon my stone inside White's territory, but it looks like it'll be impossible to save it, and I like the prospect of getting making territory on the right.

HolIgor: White 74. I played an extension.

Scartol Black 77: I've been told to hane when attached to, and this seems like no time for an exception. Although the more I look at it, the more I wonder if there's any hope of saving that line of stones and maybe I'm just wasting my time..

HolIgor: White 82. Now the fight starts. We can consider a lot of variations. (I assume you mean White 80? - S) 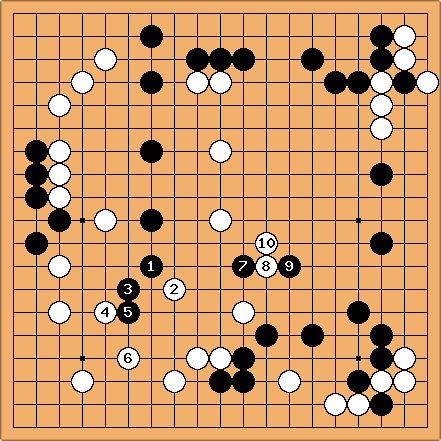 HolIgor: I think that you are playing very safely and soundly at the moment. Each move has a purpose.

Scartol Black 61: Since you're trying to separate my groups, I wonder if you plan to kill the group on the left. But I think I can make it live, and I'm very worried about your claiming too much territory on the lower left, so I'm going to continue pushing there.

Black 63: More of the same.. The IkkenTobi seems too risky and I don't feel confident enough that a stone placed further into the territory would be saved in time..

Scartol Black 65: I can't come up with anything more effective (see below), so I'll just push a little, knowing that I'll get hane'd and it'll be the end of the reduction.

JamesA: HolIgor, why did you play 66? Also, I think White 54 earlier may have been a critical mistake. I think 50 and 52 were kikashi and should have been treated as such. 54 created a weak group, which allowed Black to threaten it in order to enter White's lower left moyo. Final thought - what about using White 60 to cap the black group, to prevent it entering White's moyo? The move played doesn't threaten anything nor make territory, nor prevent Black from making territory. What do you think?

HolIgor: There are several reasons why I played the way I did.

First of all these nice moves did not occur to me. I am only IGS 4k* and don't know much about fuseki. I call it a divination phase of the game. You have to divine the shape of the future fight. So, I try to do my best but it rarely works.

Secondly, I don't like moyo. Neither my own nor the opponent's. Moyo for the opponent is bad, but it happens in almost every game I play. I tend to grab corners in the beginning, so, naturally, my opponents get some influence. Then we fight. Sometimes they win. My moyos are much worse. They happen less frequently though. I used to have difficulty with converting them into territory. That is because I am not a good attacker. In the end I had nothing. As they say in Hikaru no go - arimasen. Then I developed a great principle No to large moyo and the results became better.

Thirdly, in this particular game, though, my opponent played slowly but thickly and did not show any intention to build a moyo. So, I thought that perhaps I could build my moyo after getting the corners. But I did not have enough time to do it. It is really difficult to get thickness after you've got the corners. I could not build any thickness on the right. I've started, but my opponent saw my intentions and cleverly began his reduction immediately. At that moment the potential moyo became too small to expect it to work. As Sai said "Maybe not against this kid but against a strong player..." I did not want to play moves "against this kid", so I honestly played what I had to play against a strong player.

At the moment I try to keep my stones connected.

The fourth reason is that getting four corners, one of which is large, and turning the center into a swamp, is enough to win.

JamesA: Thanks, HolIgor. I must say, Scartol seems stronger to me than 25k, which he says he is. By the way, I am also *4k on IGS - my comments were intended more as questions than advice:)

Scartol: Yeah, Since I've been playing on KGS I've gotten a renewed sense of my own skill. IGS says I'm actually 26k now, but KGS says 22k. Crazy! I hope I didn't muck up this game by misrepresenting my skill.

Anyway, is a pincer the move for Black 69? I know the proverb says "attach, hane," but I'm worried about the area to the right..

JamesA: Subject to what HolIgor thinks, and any wandering dan players, I think that the clamp that you played for Black 69 probably isn't going to work. HolIgor's White 70 demonstrates why. The two white stones neatly split Black 69 and Black 67. This means that any attack Black may have had on White is over. In my opinion, Black should have extended upwards from Black 67, as below. 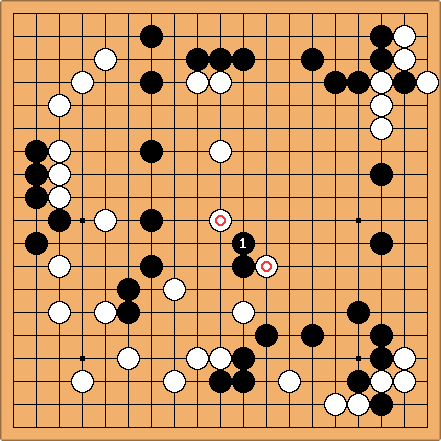 Given the thinness of White's central group, I think White 68 was an overplay. Playing at 1 in the above diagram would give White an unpleasant choice: of risking a difficult fight with her group, or having White 68 swallowed up as part of Black's right-side territory, and thereby becoming a bad move.

Black 1 is certainly the move that springs to mind immediately, as it splits the two marked stones (it's generally a good idea to split apart the opponent's stones - it weakens them).

Going back a little, I'm not sure Black 67 was the best way to attack (if indeed Black should attack in this position). I'm going to stick my neck out a bit here and set out some general ideas to bear in mind when attacking.

As a rule, aim to play moves that achieve either 1 or 2 whilst threatening to do 3 later (if the opponent plays tenuki). Attacking with 3 as your main objective is highly risky. If you fail, you will most likely have strengthened your opponent and lost the opportunity to make threats which could achieve either of aims 1 or 2. You should only have 3 as your main aim if you have done some extensive reading and are pretty certain that you will succeed. Strong players will usually only try this where their opponent has 2 or more weak groups on the board and it is possible to attack both at once, or where the opponent has played tenuki outrageously! (See amarigatachi.)

So...coming back to the actual game. Is it realistic to aim at killing White's group? No - because Black's group to the left is thin (meaning White can strengthen his group by threatening to cut through) and White has live groups to run for on the right side and at the bottom. Also, White is the stronger player.

Last then, is it possible to make black territory by attacking? Maybe - Black's right side area is ripe for expansion. If Black wants to attack immediately then, that should be his aim.

However, there is another option in terms of attacking. You could play a move that doesn't attack immediately, but sets up a strong attack later - for instance by cutting off the escape routes for a group. Again, the best way to do this is by playing moves which both cut off an escape route and build territory or destroy territory.

Looking at the position after White 66, can you see any move that could achieve this?

Also, bear in mind that in this position Black's right side is open at the bottom at both ends, so he needs two moves really to stop White invading.

Scartol: See, this is why discussing a game in progress is sketchy for me. Without JamesA's comment, I might not have recognized that the 54 group was weak. But now that I have, I'll go after it with Black 67.

Scartol: So I want to break into that lower left corner and reduce it as much as I can. Is it too late? Everyrthing I think to try ends up in failure.. 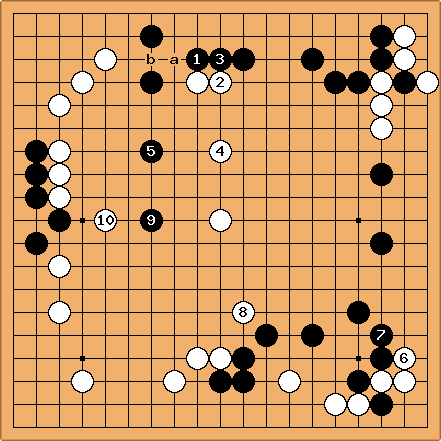 Scartol Black 51: Is there anything else I can do here? It's a peep, right? So I have to protect, yeah?

HolIgor: I don't know the answer. I always fall for protection in such situations. Maybe Bill would advise something else.

Bill: First, it is not a peep. a would be a peep, threatening to push through at b. As a general principle, the smaller the opening through which you push, the more severe the push. Since a peep threatens to push through the smallest opening possible, its threat is normally severe, and you should almost always protect.
This is an erasure. Whether to protect or not is not an easy question. :-) When in doubt, you probably should not.
Here, because of White's surrounding strength (the wall on the left and the stone on tengen), it does not look like Black can mount much of an attack. At the same time, does protecting allow White to make a strong wall? Maybe this is a time for mutual destruction, where Black allows White to ruin his prospects for ruining White's.
Perhaps Black should protect at a instead of 1. That connects and prevents the wall to form a moyo on the left. Look for dual-purpose plays. :-)

HolIgor: Black 57. This is supposed to be teaching game with a lot of diagrams and explanations. It is easy to take that decision and it is difficult to follow it. Sometime I don't have anything to say, sometimes I hope that Bill would comment. But I forgot that the main burden falls on the student. Why did you make that move? Is that move strangest locally? Is that move strongest globally?

Scartol Black 57: I made that move because I was nervous about White 56. If you had gone to the left of Black 57, I would have been in double atari. I haven't been commenting on my moves without provocation, because I worry about giving away my plans.. But I guess that's a silly attitude for me to have in a teaching game..

Black 59: My instinct is to defend against White 58, but I'm going to fight that and counterattack instead. 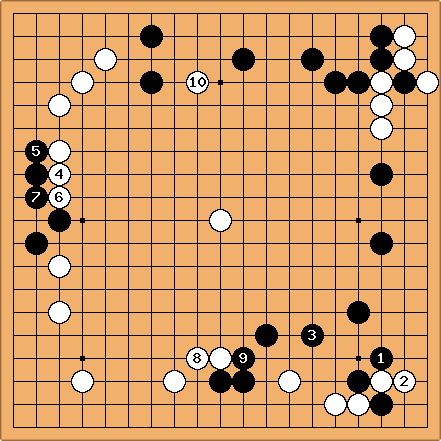