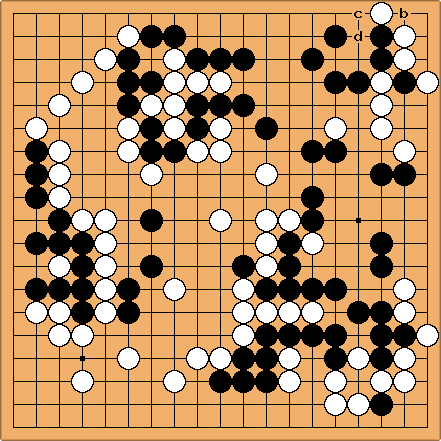 Scartol: I will resign. I'm sorry you feel that it was not a good teaching game -- I couldn't disagree more. I know I played poorly, but I think it's important to acknowledge that:

1. We started quite a while ago, and I've practiced a lot since then, so I recognize just how bad some of my opening moves were, and

2. I've learned tremendously from this game.

I guess maybe we have differing opinions on what constitutes "a teaching game with a lot of diagrams" -- as I look back through the three pages we drew up thus far, I feel like we've come up with plenty of diagrams and lessons on alternatives to the moves I chose.

The last thing I want to do is waste your time, and I feel like that's what I'm doing here. So let's just call it off.

Thank you very much for taking the time to instruct me, Holigor. I appreciate your teaching and the comments that you -- and everyone else -- made. 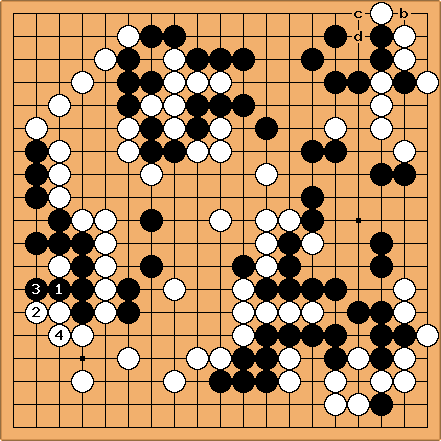 HolIgor: That's your right to resign the game. If you want to continue then I would suggest to do it as a yose exercise. If you make a move you have to declare its value. It would have some reason then. Otherwise, White is about 50 points ahead and the game is in yose.

It was not a good teaching game. You've started not bad but forgot a simple thing. Check your connections. Even ikken tobi should be checked for the cutting, nikken tobi and kogeima or ogeima are more vulnerable.

Then there was a fight. It was very short. You could make a small sacrifice and escape with the large group. That was the most serious mistake.

After that the game became a large scale yose in which you followed me and could not get sente. That was one more series of mistakes. You had to try something in the upper left corner as soon as possible, ignoring my threats. Even the monkey jumps from two sides could reduce me quite a lot.

On the other side your defensive tactics did not let me complicate the game and I had to do proper moves only, just reducing.

So, this was not a teaching game with a lot of diagrams as it was declared at the beginning.

Scartol: The more I look at the board, the less difference these little moves of mine seem to make. I'm willing to resign if you want me to, Holigor. 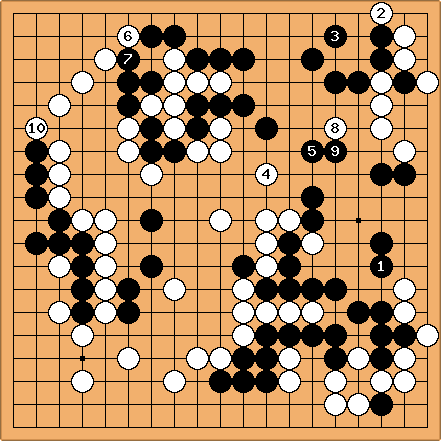 Scartol Black 139: This seems like the most urgent response.

Scartol Black 133: If I play c, White plays d and I'm in double atari. So I'll step back and play here instead.

HolIgor: Now I switch to the upper right corner. Black's move at b was sente and I don't like to be forced.

Scartol: This seems OK. I don't like the idea of having this fellow all alone up there. 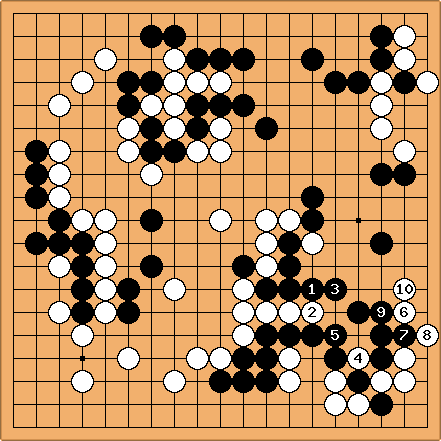 Scartol: I'm worried about White moving up to a, but I'm even more worried about losing stones in this tight spot. I thought about clamping with a myself, but I couldn't make it work in my mind..

HolIgor: It is OK. Sometimes you can't do anything. White connects with 128.

Scartol: If there's some slick way to protect myself, I don't know what it is..

HolIgor: Yes, you're safe now. So am I. White 126 is a jump into Black's sphere of influence.

Scartol Black 125: I feel pretty safe now. Am I mistaken?

Scartol: So now I'm worried about the sequence in Diagram 1A (below). But I guess I'm safe, now that I look at the preview. So let's try it out. I hope my anxiety about losing a big group is unjustified. 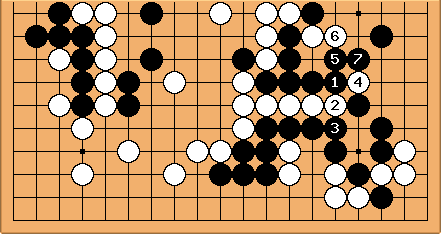 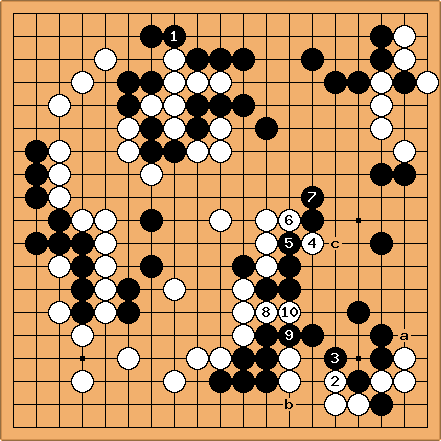 Scartol: Hmmm. Well, my fear now is that one of my groups will be cut off. In Diagram 1 (below), the big heavy group on bottom gets cut off, which would be bad. If I protect them, as in Diagram 2, then I have to retreat as far as Black 5. But it doesn't look like I have a choice, unless I want the marked white stone to surround my group.

HolIgor: What can I say to your last comment? It is better to read out what bad could happen. Your move is correct if nothing bad can happen. Otherwise you had to play c. Let us see. I push with White 118.

Scartol Black 117: I'd better add a stone here before something bad happens..

HolIgor: Sure you could. My intention was to create a weak point, aji in your position. White 116.

Scartol: Seems like I should be able to cut it off with Black 115.

HolIgor: I expected a as White was preparing for a monkey jump, which was too dangerous because of the aji in the corner.

Black 113 has the advantage that a move at b would create an awkward shape for White. But generally, it was a moment to consider some large moves elsewhere. I believe that one of the weaknesses of the double digit kyu players is making small moves at this stage of the game, defending where the opponent can only take a little. It is important to try to get the initiative. If you followed the OngoingGame2 you could see how White left gaping holes in her position in order to get back into the game.

White 114 is a probe. Let us see what is your reading of the situation.

Scartol Black 113: I think I'm willing to let that one go and protect the larger framework.

HolIgor: Of course, I think that White 110 was sente. I considered it important because, whilst not changing the number of liberties of White's group, it makes Black's shape at that point slightly worse; and provided that White captures the stones in the center (sooner or later), White could be able to enclose the corner in sente. White 112 returns to the lower right corner. The aji in that corner makes white uncomfortable. It is really aji, i.e. bad taste. I don't like playing with aji, so usually I try to force my opponent to force me to deal with it.

Scartol Black 111: If there's another move in this area, I can't see it. 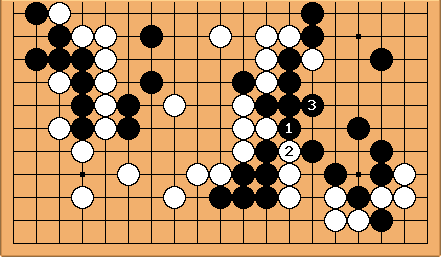 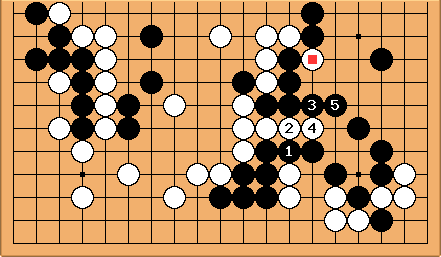 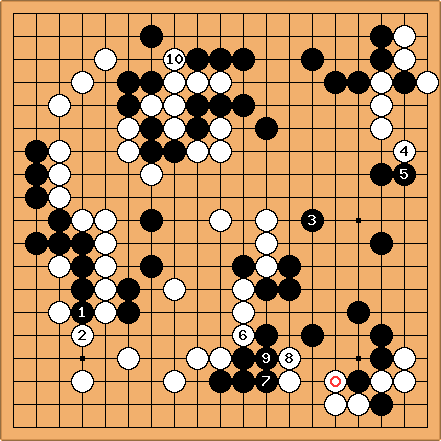 Holigor: White 110. Now I want to improve my position a little at the top.

Scartol Black 109: Can't let these three guys get cut off..

Holigor: White 108. I continue to play what I consider mutual forcing moves, slightly improving my position.

HolIgor: Black is very thick everywhere. Any invasion would be insane. So, White has to improve the position and make the double sente moves if possible.

Scartol Black 103: I've been wasting my time (and yours, Holigor) on the left there. I don't know what I was expecting to find. 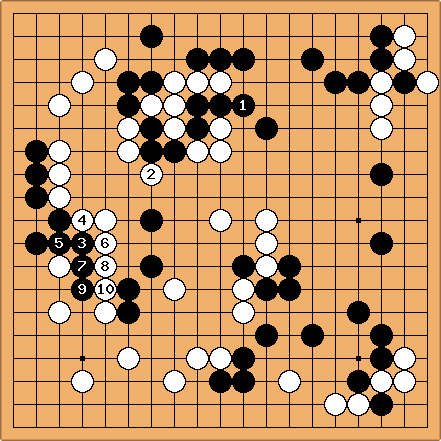 Scartol: The problem with going away for so long is that one is liable to forget one's strategy -- and things look so much more hopeless than they used to! I'm sorry for being so long absent, Holigor. I've got this new teaching job, and I'm working nights as a tutor and my girlfriend is going away for a month soon, so I've been spending lots of time with her. I appreciate your patience.

Scartol Black 95: I guess there's probably no hope to save those stones in the middle, but I won't know for sure unless I try.

Scartol Black93: Not sure how much success I can have here, but I figure it's at least worth a shot..

HolIgor White 2: Atari again. There is a need to consider other options for Black. /B 91

Scartol Black 91: I think I see how White is connected, but I'm going to make these stones work as much as I can. 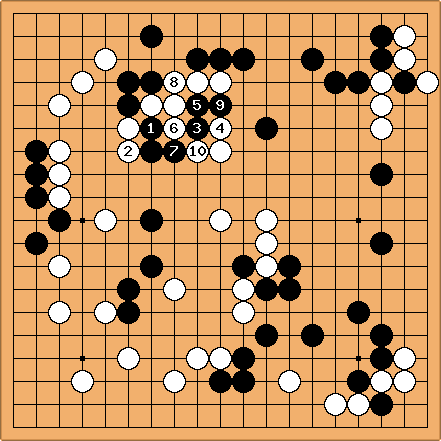 Scartol White is connected? Hmmm. Maybe I'm being foolish, but I want to make sure I'm wrong.

Scartol Black 85: Moving in for the cut.

HolIgor: White 82. Now the fight starts. We can consider a lot of variations. (I assume you mean White 80? - S)