I'm somewhere around 7k. Dave, how many stones do you want to give me? I want to learn, so comments and hints are very welcome and so you might want to give me less handicap...

mat: I'm not very sure about my rank, but I estimated 7k from my games at go clubs in germany. I don't have experience with IGS. I've just added 4 stones - if you want to give me more add them. A game with less stones than I actually would need would give you the chance to give me some useful hints... OK?

Dave OK, I am guessing that I would be on the order of 2d in Germany. I have set the board up at two stones to give you some problems to address from the start. At the same time we will give you a 50.5 point komi. This is something like another four stones advantage. One issue for you is how to think about and use the large komi. You might want to discuss a strategy first.

Thank you for the game! Of course I'm interested in your thoughts about the game. What would you guess is the most important thing for me to improve? did I continously lose my credits or have I been especially weak at a certain phase of the game? mat

Dave First let me say that it was fun and interesting. Directly related to the final result, I think that the ko threat at Black 142 was regrettable since without that unexpected gain for me, it might have come down to a half-point decision. Of course there were many other points earlier (only natural from the difference in strength). We'll go over them gradually, hopefully with the help of our fellow SL visitors.

Quite early the game turned into a moyo contest. It continued to the end in quite a peaceful manner with only a brief flurry of activity at the top. If you judged that you were ahead throughout (correctly) and only stumbled at the end, then there is nothing really to criticize in your overall approach - there is only a question of improving your technique. On the other hand if you settled for quietly dividing up the board because you were not sure what to do, then you missed the opportunity to try a more aggressive but unclear course of action and either succeed spectacularly or crash and burn in utter ruin :-) Since this was a teaching game (the page title says so!), I wish that you had done so (and during the game feared that you would). I think that once we set up the moyos the biggest learning opportunity was the exploration of how to invade or more aggressively reduce. In my own Go this is a big, difficult question - frequently frustrating but ultimately fascinating. When we play explicit teaching games with stronger players, we should try to test ideas and look at parts of the game that we do not understand well. In my own case at the end of the 80's I had the opportunity to play a long series of games with a lower-ranked pro at a club near where I was living at the time. My advice here is not based on what I did but rather my reflections on looking back at the way I wasted so many Saturday afternoons thinking that I was almost beating the guy :-) - which in any case turned out to be wrong 90+% of the time!

mat At least I made two attempts to invade (Black 36 and Black 38) for which I was punished quickly ;-) And Black 68 was aggressive, too. (I see, three aggressive moves are not too many...) I like to play solidly in teaching games, because that makes the course of the game clearer and enables me to look at where my moves end up. To improve in life-and-death situations I can do exercises (e.g. goproblems.com), but a teaching game might be over too quickly after two or three fights are lost - which would be a pity! (I played a couple of times against a 2 kyu player (German) who plays very aggressively - and I tried to fight back: the game (even with four stones) tended to be decided after 40 moves.)

Of course I was unhappy to watch you reducing my territory while I couldn't do equal damage to you (you remember my comments?), but what could I have done? Probably I missed some big invasion points just because I didn't see them. Can you show me some?

Good idea. I'll add my thoughts there and raise some others here as well. However, it will take a while. I am about to leave for two weeks vacation. For the first week at least I will not have net access - thereafter I might have access but not much time. So be patient please :-) Dave

Dave Hi mat! Yes the lazy bum does need a little prodding once in a while :-) 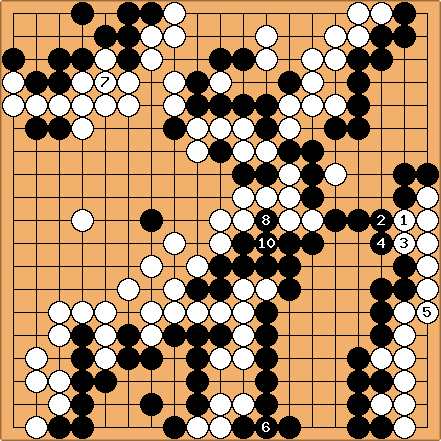 Dave Yes, please count (good practice :-). Then we can go back over the game at our leisure.

Dave It looks like I made a mistake in making the "captured stones" diagram so I think that actual result is 5 1/2 - for what it is worth. 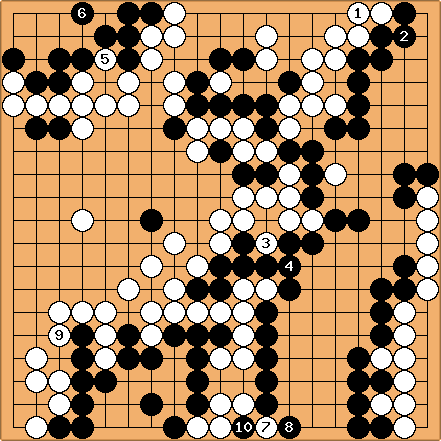 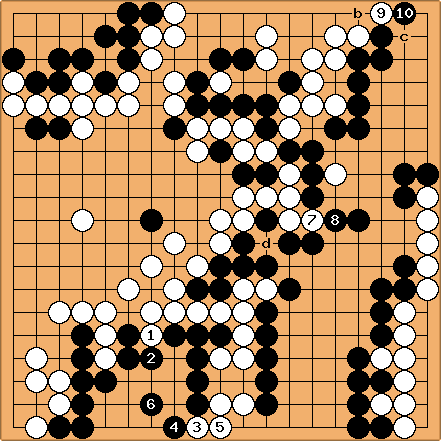 Dave Black will have to connect at both the cutting points marked a so White plays b next to create a dead shape. If Black tries to play b next to stop this, White has two liberties on the left so there is time to play atari at c and force Black to connect. Black 176 was a wise choice :-)

mat I've had too many bad experiences. How long does it take for you to see that without Black 176 Black is dead?
Dave Working slowly in an SL teaching game, not so long. The shape of Black's group looks bad. Playing over the board or on the net with a clock - forever! :-) The tricky part is to realize that 7 in the diagram is enough to fill up what looks like a very large space. I find this kind of reading very difficult in a game.

mat The group looks bad? Does it still look bad after Black 176? Does bad looking mean fragile ? or does it mean ineffective (so it might still look bad)? 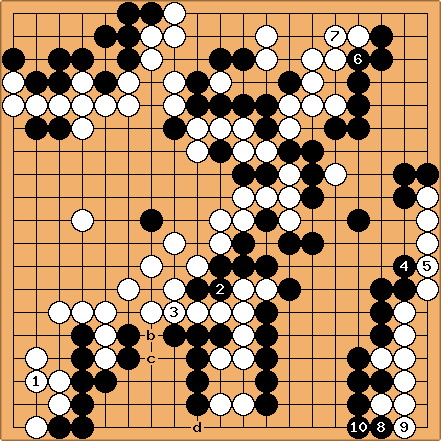 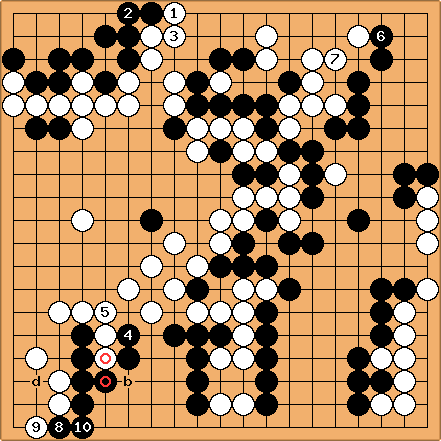 Dave Wait, I have patched the game!

After all the analysis below, I still made a mistake and gave you incorrect advice. Black has a much better play than the original simple connection in the upper left. See below...

mat Honestly, I initially had planned Black 148 where you patched it to. Of course I hadn't analyzed the situation as deeply as you, I just thought it was a sort of "can't-be-wrong-move". OK then, I followed 152 and 153, Black 154 and a seem the biggest to me, maybe Black 154 (and the possibly following 155) is more sente.

Dave It seems the two marked stones appeared rather magically out of all the confusion. But that we will consider punishment for my poor analysis/advice yesterday! Without them, I might ignore 154 to play at a. In this, however, I will connect at 155 since the aji at b is lost if you capture my two stones. If that happened I would have no more sente plays along the bottom left. 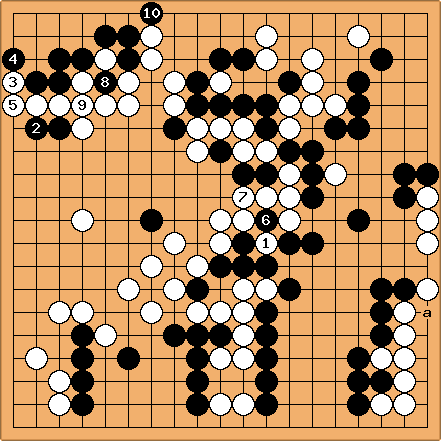 Dave This is not a good choice. It is certainly a ko threat but it loses points for Black. Right now White only threatens to gain a couple of points in the ko. Black has many threats that are worth more than that (for example a). When Black retakes the ko, White has no choice but to connect since the threat is very large if Black cuts at 147 and then goes all out to win.

mat Black 142 loses points? It loses one single point, doesn't it? Black 144 is still sente, so I don't understand why it was a bad choice. 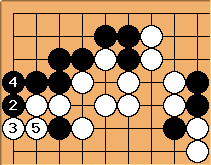 Dave If Black plays 142 here, the threat is the same as in the game. However, when Whiet answers with 143 and 145 (after which Black takes the ko), White's territory is three points smaller (including the stone not captured at 145) while Black's is two points greater (most likely Black will have to add a stone in the corner later in the game sequence).

Dave W147; I'll connect here. However, I think that I made a misleading statement in the alternative to 142 above when I wrote that B would have to connect later. The more I look at the situation in the upper left, the more it looks like I can now force a seki starting with a play at b. The seki would destroy about 8 points of Black's territory.

mat Black 148; Well then, thank you for that hint. I felt unsure about it, but at a first guess I thought I could live (without seki). Anyway, leaving it to you although I know better now would cause me a headache ;-) 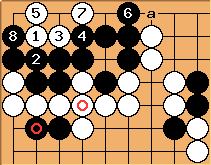 Note that because of the marked black stone, Black can capture the ko and force White to connect at the marked white stone before doing anything else. This looks like the correct result. However, before Black plays 8, he can push out to the right at a, threatening to connect to the dead black stones to the right. This will allow him to destroy about five points of White's territory. This reduces the loss suffered in the corner. 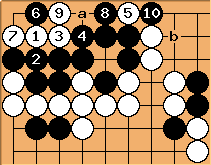 White would like to play 5 here but it looks like Black just has time to play 8. Black 10 then increases Black's liberties and makes miai of a and b.

Updated The last two diagrams give hints to the proper course of action for Black. The point is the connection to the right. 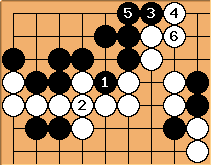 After 147, Black should start by taking the ko, forcing White to connect. Next Black plays the hane on the right. White has nothing better than blocking and connecting. After this... 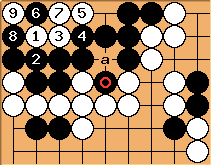 In this position if White tries 1, play flows along until Black sets up a double ko with 8. White plays 9 to prevent Black from capturing. But how can White win the ko? She has to first fill in the outside liberty by capturing the outer ko at a. Whenever she does so, however, Black captures at 6. If White makes a ko threat and recaptures at 9, Black recaptures at the marked stone. Black is alive.

I have corrected the game to reflect this situation.