Amarigatachi (English: overwrought shape) is a misfired attack, where one player fails to benefit from an attack and usually ends up with a less favorable position than before the attack.

1) Currently, the word is mostly used with strategical meaning; that is, a player finds himself behind in territories after his attack has failed.

2) In the past, the word was sometimes used with more tactical meaning, as in the following example (from the book Killer of Go, first published in 1967). 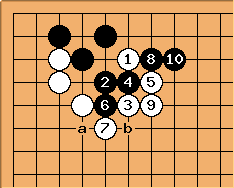 This is a corner pattern in which White attacks at the vital point of Black's shape, instead of extending along the left side.

White tries to trick Black into cutting at

. Black however calmly cuts at

instead as he knew what White was trying to do. White's attack has misfired and now he's left with two cutting points, a and b. This bad aji resulting from an overly aggressive line of play, is what is known as amarigatachi. 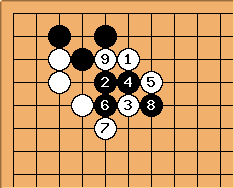 The way amarigatachi is usually used (e.g. as in amarigatachi ni sareru), there is more than a hint of a weaker player being gulled into making an overplay. You might say he has been has been amashi-ed.