Here's an interesting seki that showed up in a game one night. I've simplified the shapes of the territories somewhat, but Black's false eye position and the corner are exact.

This is a zero score under Japanese rules. Note that under area scoring rules, however, Black has at least one more eye than White. (If White can win a ko, I think, then Black's false eye in the corner can be filled.)

I would welcome scoring analysis from some of the experts. -- Thomas Bushnell, BSG

(Copied from Seki): I think it's interesting enough to have its own page. See also Seki with Eyes Question 1. Shall we organize a seki path? 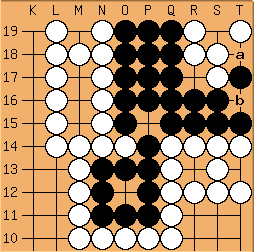 It seems to me that Black has to fill the ko in order to keep the seki. If not, White takes the ko, ignores the threat (it would have to be enormous!) and lives in the corner, killing Black.

TakeNGive: Yes, when White makes atari at a, Black will have to fill the ko at b to preserve the seki. But, White can't really start the attack without a killer ko threat:

jfc: There are 3 scoring rules to consider the position under:

Under Japanese (1) and area scoring (3) black plays b as this simplifies the position and has no negative impact on his score. Under territory with points in seki (2) black should omit b unless there is the large unremovable ko threat.

Pledger: Under area scoring, White gains a point for playing a and forces Black to waste a move on b (assuming White would win the possible ko). Under territory scoring with points in seki (e.g. IGS rules), White a gains nothing directly, while Black b loses a point. Only under Japanese scoring does White a Black b have no effect. 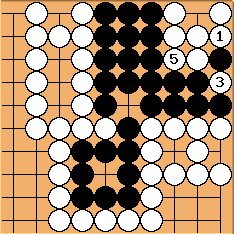 TnG: Now the board looks as below, and it's Black's turn; and Black is free to retake the ko at b. So, White shouldn't play this without a large un-removable ko threat or some kind of double ko situation to use as a threat; and when White does initiate this, Black should just fill the ko instead of tenuki. 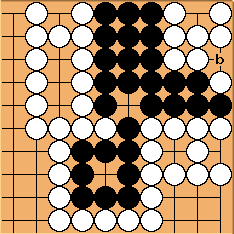 Ah, yes, I had overlooked that White must fill an own liberty to start the ko. Your explanation makes perfect sense. -- dougm?

Dave: Note that White does not need such a terrific threat. If Black ignores a White ko threat in this position, he gains about 18 points. So all White needs is a twenty-point ko threat to make a net profit here should Black not connect the original atari. On the other hand if White captures here, she gains nearly sixty points. The difference in the size of the ko threats required puts quite a burden on Black. It is quite likely that White would be able to succesfully fight this ko. Black most likely needs to connect.

If black plays elsewhere again, white takes the black group and kills everything. This is -57 points. The local tally here is -1.

Black fights the ko. One move to capture the ko , white plays elsewhere, and one more to capture white's whole group. This will result in 15 points from the capture plus two eye points for black, plus the ko capture, yielding 18. The local tally here is 2.

Hope I did this right. You are right that this will be tough for white to fight the ko: there are not many 50+ point threats lying around your average game (50+ points / 2 plays = 25+). But white and black don't need to make different sized threats... the value of the ko is what it is for both players, right?

blubb: Once the big ko is started, there is no difference between the sizes of threats needed by either side. But as long as that ko can still be avoided, the situation is hyperactive (see Bill`s account below).

In terms of Normal Values, you are asking for the value of the node labelled as pos2 in the following graph:

Whatever values you try to assign to pos1, pos2 and start, they won`t be consistent with both the huge and the small ko at the same time (note that 19/2 < 40/3). They can be correct for a particular choice of play only, which in turn depends on the ko threats available. 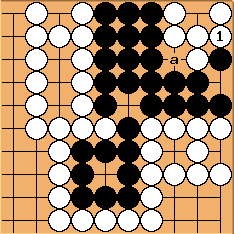 Bill: I am going to start from this position, after

makes a 10,000 year ko, and use Japanese scoring. Either player may make a direct ko with a play at a.

Result: -t, where t is the miai value of White's play.

It is much easier for White to make the direct ko.

See also Seki with Eyes Question 1 and the pages in the Eyes Collection.