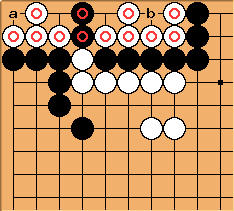 Hmm. I think that saying that he gets '10 points from the stones in the seki' can be misunderstood. With area scoring all alive stones on the board (+ territory) count as points. Stones involved in a seki are alive and thus count as points. That is not because they're in a seki, but because they are alive. In practice, under area scoring, there are extra no points from a 'balanced' (same number of eyes/liberties) seki either - if Black has 10 stones in the group and White only 2 then White has 8 stones (=points) somewhere else on the goban.
-- MortenPahle

MikeTerry: Another point - under the area counting rules I know of (Chinese and Ing rules) Dame points surrounded by both players are shared equally rather than ignored. So ignoring the outside stones in the diagram above, Black actually has 3 points, and White has 13 points. Of course, counting the shared points does not alter the difference in Black and White scores, and so has no effect on the game result.

Mitch: Things before 1991 were even more complicated when using the Chinese rules, because the shared points were divided up according to how many adjacent black or white stones there were. Thus the two points between the black and white stones were each divided 2/3 for white and 1/3 for black. So black would have had 2 2/3 points and white 13 1/3...