kokiri : I played a 3 stone handicap game against a British 2 Dan this weekend and the following sequence came up: 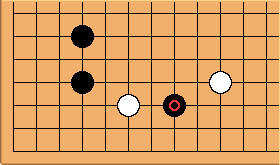 It was a three stone game and I invaded as marked. The continuation is below: 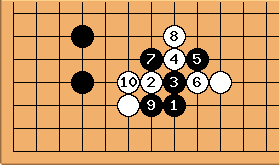 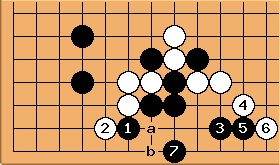 is a mistake as a for white is then pretty catastrophic, perhaps b is better but even then... 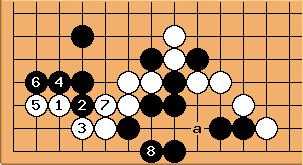 ...after white plays a bit in the corner, I get to play at

and leave a dead shape (at the time, I read white at a as seki, but it appears to kill). there is some room for counterplay on both sides, but this still seems pretty poor for black.

This sort of invasion must be common, and one which, as a supposed 2kyu, I ought to know but from Get strong at Invading and other sources I can only find examples of the attachment shown in Low Invasion Of Mixed Three Space Extension.

Thus my question is: what went wrong?

Of course the black group on the left hand side also died later, but that is another story... 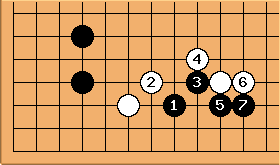 kokiri The Right hand corner was the following taisha (mis)variant, quite thick but I guess black has a workable position.

Charles Looking at pro games (not many examples), the lines used were

as suggested by unkx80, plus this idea: 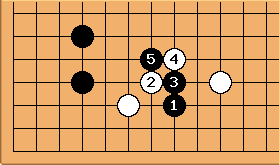 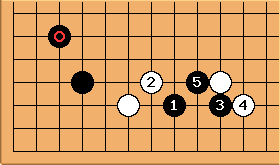 This order of moves, actually my first thought, was played in an old game by Otake Hideo, leading to a ko.

Bill: I'm a square zero kind of guy. I would say, as a practical matter, what went wrong was the lack of preparation. In theory there may be nothing wrong with the invasion, witness professional play. But if you are taking 3 stones, why duke it out when you have a good alternative? IOW: 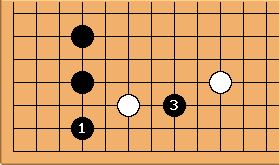 is a dual purpose move, securing the corner while preparing to invade at

. The threat is often more potent than the execution, especially against a better executioner. ;-) Tactical notes: 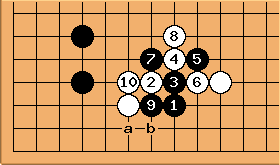 looks "obvious enough"? There is some unlearning to be done here. Black's play is heavy.

reduces the liberties of

appears to strengthen White more than Black. Then

strengthens White without increasing Black's liberties. However, after

, if Black plays at a instead of

, White can reply with

and Black cannot respond at b.