I had this position (playing Black) recently and I wonder how to properly handle this fuskei: 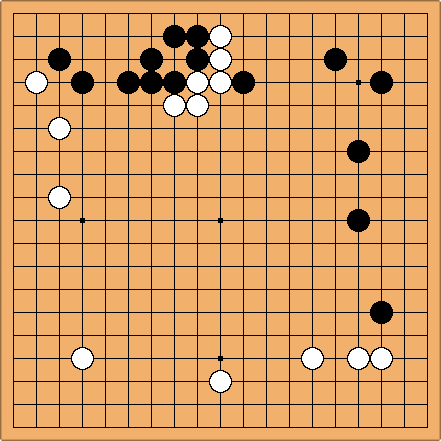 Many thanks in advance.

In the game I played the marked stone (see diagram below) because I thought that it would both expand my moyo and keep the white group from settling and the game continued like this: 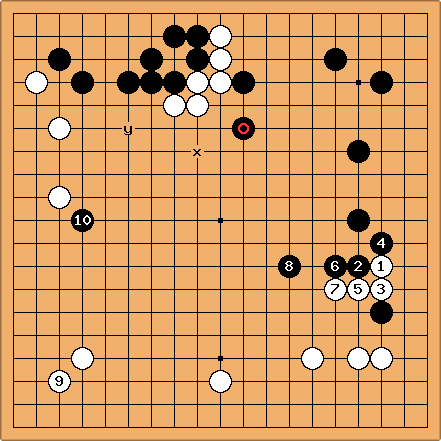 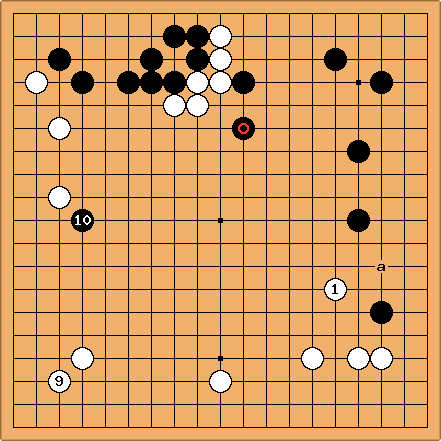 Klaus: some ideas on the game continuation first: a might not be the best. Locally, I would prever

. Both players have moyos, so it is more importand to play on the borderline of these moyos thatn to grab points. 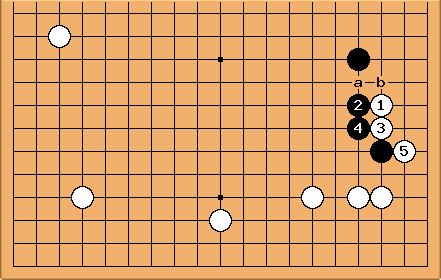 is unlikely to be good at b this might improove. Blacks outside strength is o.k. See Low invasion of mixed three space extension for reverence.

Strangely, the game continuation turns out to be interesting for black again. Why? First (see diagram abouth):

are pushing from behind. at least

should be omitted. White is already overconcentrated, and this increases the direction error of

. Second: the game is about something diffenrent: The white grope on the upper side. white should move out at x or try to connect around y as soon as possible.

This brings me to the conclusion, that

Dieter: If you judge the global position, I'd say that Black has more secure territory than White but White has more potential for development. The marked White group is not settled, but I can't find a convincing, clear-cut way to attack it, as it as escape routes at a and b. it is difficult to tell whether the attack at either escape route will benefit Black more than it will harm him.

What Black wants to avoid is that White develops while he secures his group at the same time, with moves such as c. Therefore, I plead for cutting down White's moyo first and let the relative weakness of the marked group linger until the chances on a beneficial attack are better. 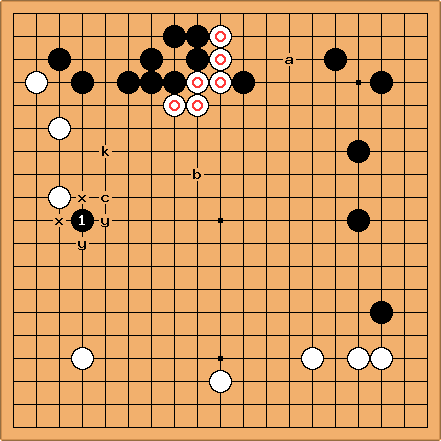 , which was suggested earlier, but play it immediately. White's natural moves at x will be answered by the y moves for Black, yielding influence towards either the moyo or the weakish group.

kokiri i agree with dieter's assessment of the situation.

is quite an attractive move and i like the reasoning behind it.

The move that first occurred to me however is something like k. The idea is to put some gentle pressure on the white group on top whilst developing a position to help reduce the white moyo. maybe

is more subtle though.

iff An immediate 3-3 invasion in the lower left corner is too crude I suppose? 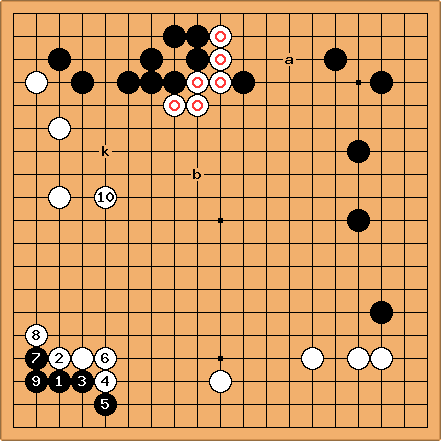 Dieter: I wouldn't call it crude, but there is no way to predict at which point and how White will grab sente to play the multi-purpose move

. This is one of the options she has.