Method of playing inside systematically 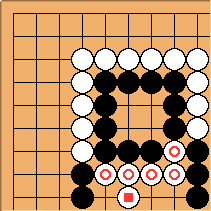 In a position of this kind, White may eventually need to capture the inner black stones.

We aren't showing the complete situation of

is a connection to the rest of the group. Just suppose that White knows that this capture must be made at some time, perhaps nearly at the end of the game. Black's stones are dead as we see them - but how can White remove them?

The answer is that White must proceed in steps, reducing Black's liberties, which currently are four. The first step is to reduce that number by one. 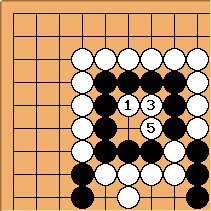 By playing inside with

, White puts Black into atari. Black must answer to save the stones, using 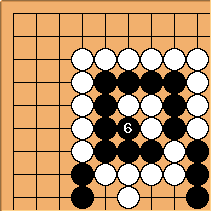 . That leaves an unsettled group, so that White must answer immediately. 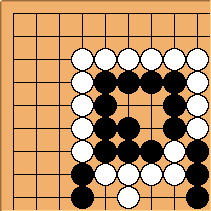 This position is one in which Black can make two eyes, but it is White's turn. In fact White's objective was said to be to reduce Black to three liberties, and White has succeeded. But this is no time at which to forget to play here. 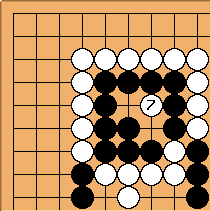 is required, and also reduces Black from three liberties to two.