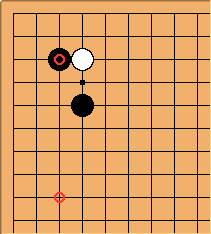 here to play elsewhere. There is also a related family when White replies, but with a play at the circled point. 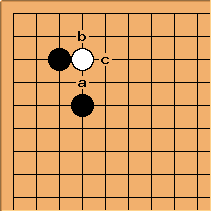 Black's common play when White plays tenuki (totally) is at a or b here, while Black at c is rather rare in pro games.

Tapir: Winning percentages for b are significantly higher than for a (55% vs 45% - with each more than 300 games).

xela: It's dangerous to read too much into statistics for middlegame positions. There may be a difference between situations where white tenukis from an already inferior position (attempting to create complications) versus situations where white tenukis in a balanced whole board position. I am sure tapir doesn't mean to imply that b is always a better move than ''a'; it's interesting to look at such statistics, but it's no more than a rough guide. 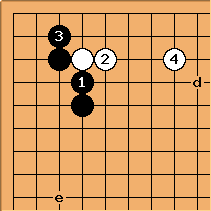 is played, White probably makes the

exchange even if she intends to treat the two stones lightly after that. Then

or d is normal, or a play in the direction of e. 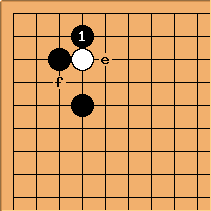 In this case White may answer at e or f, bringing up an order of play question that is still unresolved in current pro games where both are seen. 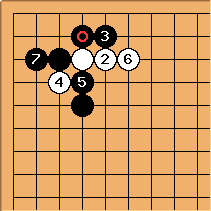 is a kind of inducing move, and leaves behind some aji for White. White may or may not develop the three stones on the upper side next. 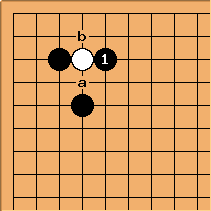 This isn't common in pro play, but did occur in 2002 in a game Ryu Shikun-Honda Kunihisa. 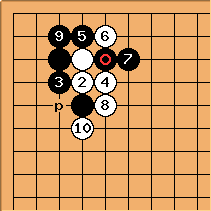 This is the set continuation, with White declining the bait (

) and making shape in the centre with

. Next, Black connects at p, and White needs to protect the cutting point somehow. 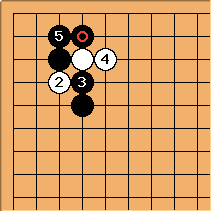 here, meaning that Black doesn't have to crawl. But the aji of 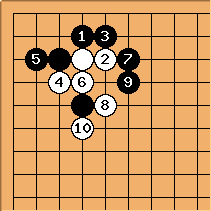 Charles There are other variations here.

in this diagram is a Cho Hun-hyeon play. 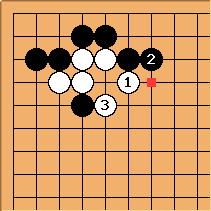 But these moves appear to be more common (

can also be played on the fourth line, at the marked point). 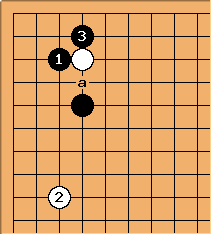 here is played, which might not be described as a genuine tenuki,

is somewhat more often chosen in pro games than a (though both are common); and it is natural for White to follow the pattern of variation 1 above. 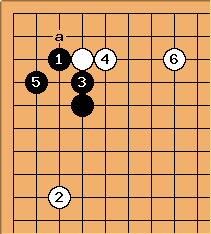 If Black plays the other way with

to make good shape is a characteristic play, doing more to defend Black's eyes than a would, but clearly having less impact on the upper side group.