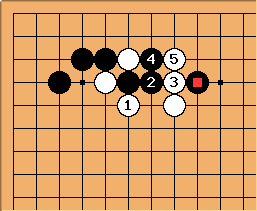 are designed to weaken

. This is a basic driving tesuji pattern. 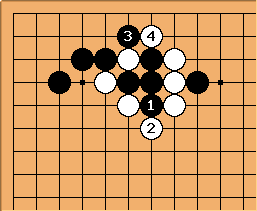 Then, from Black's point of view, it is important to leave two (even three) cutting points with 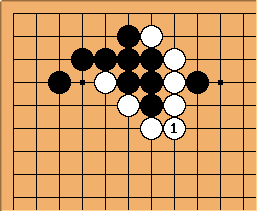 Connecting in the centre next is expected next from White, for some thickness.[2]

[1] Bill: I think that this is worth some discussion, particularly as the descent is in one of Alex's attempts. 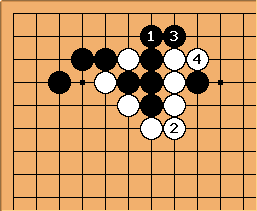 If White connects at

is double sente or close to it.
This seems better for Black than the official solution. 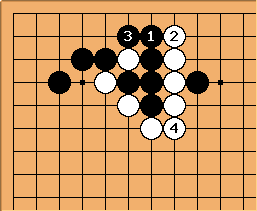 So White plays the osae. Black avoids making a dumpling, but White's wall has no defect -- unlike the result when Black simply takes. 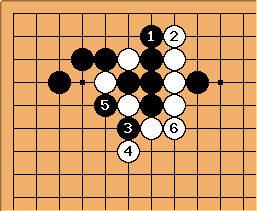 Black does better to atari at

. I think that, in general, this is White's best response. Having no defect in White's wall looks to be worth more than the the few stones that Black picks up.

Charles For a standard of comparison, one can use the joseki sequence at pushing battles in joseki 2. In that case Black does much better for territory. It isn't unfair to compare that type of result, in which Black ends in gote, with this one, where Black has sente. The local tally turns out to be the same: Black had four stones to White's three in the initial position, before Black cut (the position comes from a Chinese formation, or conceivably a tenuki joseki). That all goes to show that Black's stone on the side has become a waste.