Joseki, when to tenuki, when not, example 2

Dieter: Let's take a look at another very frequent joseki, more on which can be found at 4-4 point, low approach, one-space low pincer, and analyze when tenuki is feasible. 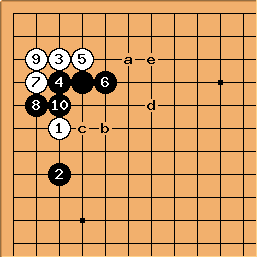 kakari, Black can tenuki. If White continues she usually plays a double kakari . After

pincer, White can also tenuki, but usually she doesn't:

has taken away one of her two options, namely extend to the side, so grabbing the remaining option, jumping into the corner, is common. The jump to b, as is documented on the joseki page, is less popular these days but still played.

to make White heavy or take complete control of this area, or he'll play at c to make large influence towards the top and centre.

, Black will not tenuki, because having White connect her stones makes the pincer look purposeless.

White will not tenuki, because if Black turns again at

, he'll have a firm corner and all the outward influence so all of White's stones have gone to waste.

, Black will not tenuki, because the hane at the head at

would be very painful and give maximum functionality to the

neither will tenuki: Black because otherwise White connects to her

stone. White because otherwise Black locks her into the corner and takes influence towards all sides.

at a, Black often tenukis: the joseki more or less comes to an end, now that territory and influence are shared. Black d, White 'e'' next are a common but not that frequent continuation, and often occur later in the game.