25 Sep: An exchange in the three group capturing race 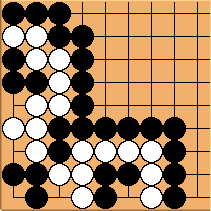 One possible outcome of a complex capturing race is an exchange, where both sides succeed in making some stones live, but losing others. For example, in the four group linear chain

, it's possible that both

will achieve life by capturing the

groups respectively. I used to think that an exchange like this couldn't happen without at least four groups on the go, but it can happen with three, as mentioned in passing by 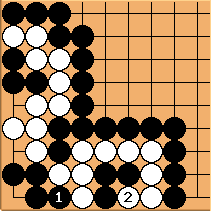 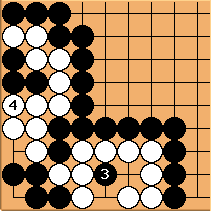 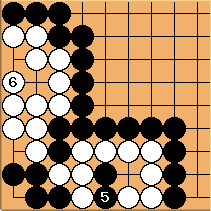 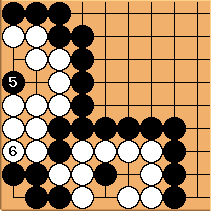 Feldman calls this a pseudoseki; I think the term false seki might also be related.

At the top levels of games and sports, there is little separation among the competitors on a basis of preparation or inherent ability. Psychological factors often thought to determine the victor, and so a lot of effort is put into psychological preparation.

Even at the low levels inhabited by myself and players like me, psychology is important, perhaps even dominant. Part of this is just the structure of the game. I sometimes feel like I'm playing in a fog, with no idea what moves are good or not, in the sense of whether or not they succeed or fail on an absolute scale. One can react to uncertainty with agression or caution; but go often rewards the former. Even when agression is unwarranted, refuting it often itself requires agression. The meek will not inherit the go board.

I can generally tell when I'm in a mental state for serious playing. Relaxed and confident, but also unattached to any particular final outcome. Nervous, distracted, anxious, or bored, intimidated by or disrespectful of my opponent, and not only am I likely to lose, I'm likely to not learn anything either. Strength is determined by the worst few moves played, which means that consistency is far more important the average level of play, much less the peak. Having my own go sage ghost available to consult with for one move, or even dozens of moves, per game would do little to help my results.

I did manage to play a good game awhile ago. It was against a computer, so the opponent always moved quickly. I could relax and take time, if I needed. Or even stop playing for indeterminate lengths of time (an hour, a day) until a proper mental state returned. You can't do that against a human [1], it's rude. And yeah, I won. (Yes, against GnuGo, playing even.) But I find the time and energy to do that too rarely.

I haven't thought much about go in the past few days. I've been distracted with other things: family, work, the Mars opposition. I was fortunate to get a good look through a 7" apo refractor after waiting in line for a couple of hours. (A lineup! To look at something in the sky!) The south polar ice cap was bright and clear, and there were perhaps some surface markings as well. Through my own 60mm telescope, I couldn't even resolve the ice cap.

You have a lot of time to think while waiting in line for hours in the cold. I spent some of my time thinking about why I (and thousands of other people, apparently) wanted to look with my own eyes when a much better view had already been printed on the front page of the paper. Visual astronomy, as a scientific pursuit, has been dead for many decades. If you want to learn new facts about Mars, you send a probe there, or point the HST at it. You don't look at it with your own eyes through an amateur telescope.

And yet: people look anyway. Why? I think it has to do with Mystery. By seeing light which bounced off of another planet, millions of kilometers away, without the mediation of computers, film, scientific instruments or the interpretations of professionals, I can feel some kind of connection, both with Mars, and by extension to the rest of the universe, large, cold, and far away. It's a symbolic connection, sure, but aren't they all? And by looking, I can see for myself some of what's known about the universe, appreciate the difficulties of learning new things, and get some sense of the dual mystery and wonder of where it came from and the fact that we can understand it at all.

Go, too, is a Mystery. Yes, it's a finite, two-person perfect information game, and everything to know about it is contained in the game tree. But 361! is a large number: the possibilities are limitless. And unlike amateur astronomy, where every observation is trodding well-charted ground, every game played is unique and new. Rank beginner or world champion, we are all exploring parts of the one game tree that unites us all.