Path: <= All you ever wanted to know about sekis =>
Sub-page of TemporarySeki

unkx80: This is the previous version of the temporary seki page.

A temporary seki is a situation where some stones are in a seki or appear to be in a seki, but later the seki is broken.

Usually this means that two (seldom more) groups would be in seki if the surrounding groups were alive. However, those are not alive so that eventually one player will be able to capture the other group, and the seki is temporary.

Another temporary seki occurs when one player in a seki gives it up (by a auto-atari), as a ko threat. Since this will then be a loss-making threat of quite serious proportions, it is not very common to occur in games. 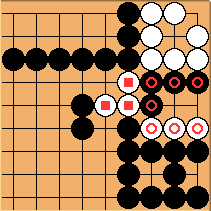 stones are involved in a seki. However, black can capture the

stones later and thus it is not a seki after all (the seki is temporary).

Bill: What is temporary about it? It's not a seki at all.

Tas: It makes sense to think about it that way in capturing races. If the three white stones was a part of a bigger group with many liberties but no eye potential, it would die because the marked black stones are alive in the "seki" and thus has infinite liberties. In a capturing race a tmporary seki migth therefore be something to strive for. 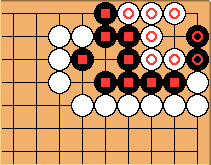 This example of a temporary seki is taken from the solution page of RTG Problem 20.

stones seem to be engaged in a seki, the outside

stones are all dead, so effectively all the Black stones are dead. 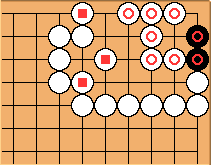 To illustrate this, we see that White can play the

moves to remove the outside

stones from the board.

Now it is obvious that the

stones are dead as well, which means that the apparent seki was only temporary.

Someone claimed about Example 2: In the first diagram, the outside

stones are only dead if white is to play here first. If black plays here first then the

zinger: I don't see how black can capture

even if black plays first. If you see a way, please post it!

Ren: I'd say that this is not a seki at all, black is simply dead. So maybe you could call it an apparent seki.

Alex: I don't know... I'd call the situation in the corner a temporary seki. If the situation was such that White needed to capture those two Black stones (for instance, if her stones on the outside were in danger of being captured and she needed to connect to her living

stones), she would have to take the other black stones off the board instead, since the ones with only two liberties are temporarily alive in seki.

If that's not what's meant by temporary seki, what is?

FHayashi: I think the alternative view is that there is no 'temporary seki'. It's either a seki, or it isn't. In the above cases, it isn't since one side or the other is not alive. What you call 'temporary seki' is to me a situation where there is a shortage of liberties for one side.

Alex: Exactly right. I was actually going to go and add that to my comment explicitly, except someone else started editing the page right after me. To me, "temporary seki" is a kind of damezumari that can come into play in capturing races.

Hicham: I would say a temporary seki would be a situation with a bent four and a seki on the outside maybe. The bent four is dead in Japanese rules, so the seki is just temporary. 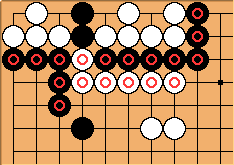 Bill: This example from the seki page is what I normally think of as a temporary seki. The corner is seki, assuming that the

stones are alive. But the game is not over yet. It is conceivable that one of the

groups will be captured or die, in which case the corner will not be seki. If they all live, then the seki status of the corner becomes permanent.

I remember that, as a kyu player, I would sometimes fail to realize what was at stake in a fight because I did not take the temporary status of a seki into account.

I had not thought of Alex's idea, but I think that that kind of situation would be a temporary seki, too. 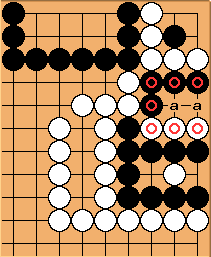 stones in temporary seki in Alex's sense? Even though the position will not be a seki in the end, neither player can safely play a dame (a) yet.

Truc: I think the definition here should be based on the term's usage in english go literature. Having said that, I do feel that the definition should include instances where the status of one of the outside groups is in question. For example, if one of the outside groups is involved in a fight. In the case of Example 1 it might still be useful to call that a temporary seki: It goes a long way towards showing why the group is dead. Maybe in this case a better word would be local seki, but if we already have a word for it there's no need to invent new ones.

Fhayashi: I don't know about your first sentence. If you're going to use Japanese words, it should fit the Japanese definition... Not that I know the proper Japanese 'definition'...

Bill: Truc, can you provide an example from the literature? Temporary seki is not defined in the Go Players Almanac.

unkx80: I believe I have seen either term at a few places (other than my How To Play Go). In any case, I thought that false seki would be analogous to false eye. False, in the sense that it looks like one, but isn't one. Anyway, I leave it to the linguists to resolve this terminology issue. 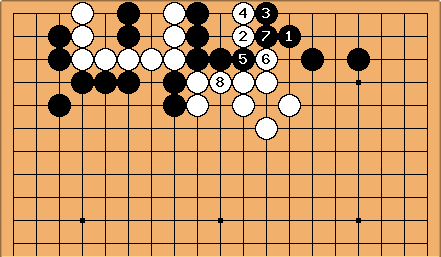 is the key point. After

, the diagonal move at

is a brilliancy. Now if

lead to a temporary seki. If this local situation is a seki, Black can capture everything. Instead of

, and the monkeys complete their bridge." (emphasis added) AJP: It seems obvious. A temporary seki occurs in a capturing race where neither side can make an approach move. Later, when some of the surrounding stones are killed, one side or the other will get some external liberties which permit the approach, and subsequent capture. This comes from the translation by Steven Bretherick?. I wonder what Shuko's japanese text reads.

Bill: Thanks for the example from the literature. :-) I wonder what the Japanese text is, too.

unkx80: This problem came from the Gengen Gokyo, so maybe someone has it? I found

this, but I don't know whether this is the original text.

unkx80: Looks like I'd better separate out false seki from temporary seki, since it now appears that the former is a subset of the latter...

DrStraw: It seems to me that temporary seki is a misnomer. It sounds like the position itself has changed as opposed to the surrounding positions changing. I think the term local seki is more appropriate.

Bill: I think that temporary seki is a translation of 假双活 (or the equivalent in Japanese). I am pretty sure that false seki is a better translation. In any event, there are quite adequate definitions for 假双活 , but in English we are guessing.

erislover: If one were to ask me what a temporary seki was, I would say it is a situation where opposing stones are assured of immunity from capture due to capturing attempts leading to self-atari, but for the status of a group bordering these stones. When all border groups are settled (alive or dead), the seki either stands or the appropriate stones are considered dead. With unsettled border groups, the seki may or may not come about. Other words might be "ongoing" or "dependent."

But it seems that the examples here describe situations where one side really is dead, the border stones are settled (or nearly so i.e. assumed dead with proper play). I don't see what relation dead stones have to seki.

this Chinese site. After

unkx80: Hi Bill, thanks for looking up for Chinese references. However, in this context 假 (3rd tone) means falsehood, deception, but not vacation. The vacation sense, as in 放假, has the 4th tone.

From the usage here (e.g. Charles on the seki page) I shall assume that temporarily seki covers the cases (1) when the surrounding stones are not unconditionally alive, and (2) when the surrounding stones are dead? I also believe that false seki does not cover sense (1) of temporary seki, but I have lost the sources and Google hardly turns out any result outside SL and How To Play Go. Anyway, I am pretty sure that the Chinese term 假双活 is hardly used to describe sense (1), but it also includes bent four in the corner. Now, to the English speaking Go community: is temporary seki also used to describe bent four in the corner? Thanks.

Bill: Thanks, unkx80, for explaining about 假双活 . As for the English usage of temporary seki, you can see the lack of unanimity. I think that a good, stand-alone False Seki page would be a great help to us all. :-)