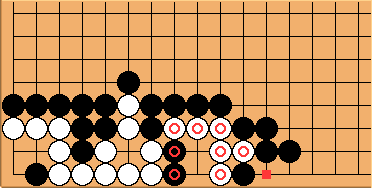 The squared point is the vital point. Should white play there first, she would have enough liberties to capture the marked black stones, creating life for the white group. Should black play there, he would seal in the marked white stones, thereby creating a false seki between the opposing marked groups. Because the white group to the left would be dead, black's stones would be alive without seki. -- ProtoDeuteric (summary of Splice's comments from the attempts page)