Sending three, returning two refers to a cyclic sequence in which one player, to avoid losing a ko, sacrifices three stones and captures two, returning to the original position and allowing his opponent a move elsewhere. The status of the game depends on the rule set in use.

Black is in trouble at the top. Although White's stones on the left have only two liberties, it seems Black cannot avoid White winning the two step ko in the upper left, as there are no ko threats, and White gets to take first.

is the only way Black can avoid losing the ko, by sacrificing three stones. If Black were to approach on one of the marked points instead, White would capture in the corner, and Black would lose his group at the top.

is, again, the only move. Black's group is in atari, so he must capture.

is mandatory. If White allows black to extend there, the white stones will be captured.

is similarly the only move, Black cannot allow white to capture at a.

, the game has returned to its initial state, with White to move. Since White is not allowed to take the ko, White must play elsewhere or pass. After that, Black will have to start a new cycle, by sacrificing another 3 stones.

Analysis of the basic sequence

If there is any area on the board, where White can achieve anything by having an unlimited number of moves in a row (which is what White effectively gets if Black is unwilling to lose his group), then White can freely play it. If there is nothing White can achieve, then:

Discussion of analysis by Robert Jasiek

Some more analysis can be found in

this paper (page 24) by Robert Jasiek.

Herman: I have now read the analysis on page 24, but it seems to be wrong? Please correct me if I'm wrong, but it seems to me that: In example 23, you present Cycle 1 and two variations (1.1 and 1.2). You conclude that Black cannot answer-force the cycle, because white can choose variation 1.2. But variation 1.2 is not compatible with black's strategy. Black would not pass in that position, but play one of the approach move on the left. Approaching will allow black to capture the white stones, and hence results in black's local-area-improvement. And that means, if I understand correctly, that white 2 is a mistake and black can in fact answer-force the cycle?

Herman: I was not using "compatible" in an informal sense, but in a formal sense. If I understand correctly, then variation 1.2 is not compatible with the player's strategy, because black would not pass in that position? (Unless strategies are also restricted to only the local-ko-intersections, but that is not mentioned in the definitions). For the analysis, it does not matter much, as indeed there is no local-area-improvement on only the cycle-set. I applied "local area" too broadly. Also, I wonder if another kind of ko-intersection is useful. One that considers the game result, but does not depend on the komi. One might define it as: A "wholeboard-ko-intersection" is an intersection for which it is true that there exists a komi for which it is a global-ko-intersection (if I am not mistaken, this would be equivalent to there being "global-area-improvement", which would be equivalent to local-area-improvement on all intersections)

RobertJasiek: Your idea "an intersection for which a komi exists for that it is a global-ko-intersection" is useful for some theoreticail study purposes but it is not needed to define ko. (Maybe it is alternative approach to define ko though.) - Hm, is compatible in Var 1.2 applied correctly? I have not reflected this detail yet. As you mention, it is not relevant for clarifying the local-ko-intersection status. But each example diagram must be correct, too. So... White's answer-strategy is given first because it is being used in the "if"-condition of the definition's last point. From the Var 1.2 position after move 1, White chooses to pass as move 2. So, for his strategy, Black 3 must choose a move. The most interesting moves for that are a) pass or b) approach-play. Both achieve the same: Black does not get local-area-improvement. For his Var 1.2 move 3, Black does not have any move for a strategy of his so that Black would get local-area-improvement. Since White can choose move 2 and may choose move 2 to fulfil White's objective (to prevent Black's local-area-improvement), the decision of Black's move 3 after Var 1.2 move 2 has to be "part" of Black's strategy. I.e., for the Var 1.2 move-sequence, either the left-part [Black at 1 - White 2 passes - Black 3 passes] or the left-part [Black at 1 - White 2 passes - Black 3 makes approach-play] (or some similar left-part) must be in Black's strategy. Without loss of generality, let us assume that the former of these two left-parts actually is in the stratey. So now we can ask: Is the move-sequence Var 1.2 compatible with Black's strategy? Ok, we give only the partial but relevant answer for the related left-part. Let us consider the following left-part of the Var 1.2 move-sequence: [Black at 1 - White 2 passes - Black 3 passes]. It is in Black's strategy! Therefore, simplifying, we may as well say that, yes, the Var 1.2 move-sequence is compatible with a Black's strategy fitting Black's answer-force objective. As you will notice, we get "Black cannot answer-force" rather than "Black can answer-force". I.e., each fitting Black strategy fails to justify the latter. Since a suitable strategy does not exist, we get "Black cannot answer-force". This is what my comments on Example 23 in the paper express. So everything is correct, although one might always be at least as precise as above, of course. Well, in principle... 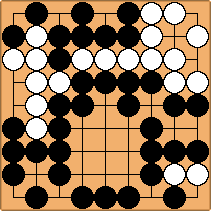 Herman: Adapted from a recent game of mine.

With Black to move, the position in the upper left seems hopeless. If white captures all of black's stones, white will win (black is ahead by 1 point on the board, so white's komi will be decisive) 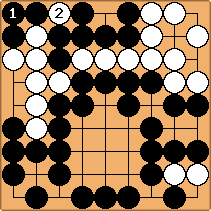 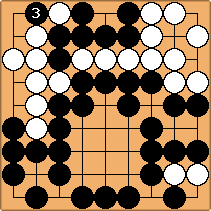 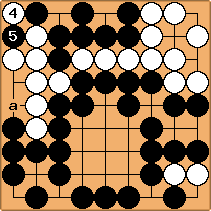 is necessary. If white plays a, black plays at

and the position will be seki, so white will lose.

, a cycle of length five has occurred (compare the first diagram). white has no move now, but if white passes, then black can pass and under some rules a dispute may occur.

If white does play a move (costing a point), then black will repeat the cycle. This can continue until there are no more viable moves for white. At which point white will be forced to pass.

Note that black will never have time to play a, because he must force the cycle or lose the fight.

The position has some similarity to moonshine life.

Discussion of the variant

ThorAvaTahr: see cycle, the position fits the cycle of five herman has been looking for. Actually regardless the rule set white will win in this position since there are no ko-threats, even if the cycle was allowed it costs one point every time he carries out the cycle. IMO you can promote this position to the cycle page, I can find no flaw. Nice job!

Under AGA rules and New Zealand rules Black can repeat the position because it does not repeat the situation, as the player to move is different. Then after White's pass Black can pass, ending play.

Under Ing rules I think that this would be deemed a disturbing ko, and White could eventually take the Black stones.

Under Japanese rules things get interesting. ;) 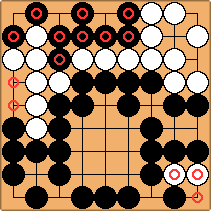 Taking this as the final position, the

stones are dead, because White can capture them in ko. The

The scoring is interesting. Because of the two dame (

) in the top left corner, the adjacent White stones are in seki, and so the dead Black stones cannot be removed. (Dead stones can only be removed from territory.) The same goes for the dead White stones in the bottom right corner. The main Black stones are also in seki. The Japanese rules are not all that clear about what it means for a stone to have dame, and thus be in seki, as some stones that are not adjacent to neutral points are said to be in seki. I think that the correct interpretation is that all of the stones on the board are in seki, except the White group in the top right. (See the Spight Japanese style rules for my interpretation.) White has 3 points of territory and has captured 3 stones and Black has captured 2 stones, so White is ahead by 4 points plus komi, if any.

Under Spight Japanese style rules Black can play sending three returning two to repeat the position and then White passes, then if Black repeats the position again the round ends and play stops. Then play starts again in the encore with White to play without any ko ban. So White can take the ko.