xela: These are the first two problems in the second part of 200 Tesuji Problems. In both cases it is black to play and invade the corner. 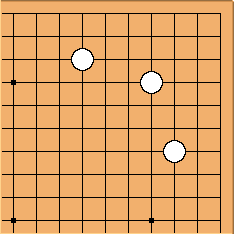 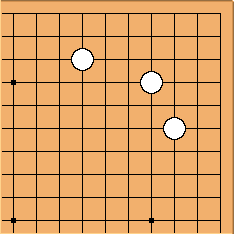 In problem 2, the main line given is this: 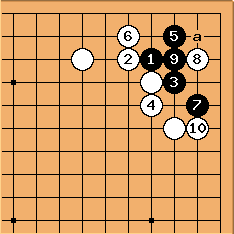 The book gives a variation for

; of course there are many other variations possible, but my understanding is that the author is asserting that black can live unconditionally no matter what.

Now for problem 1, white's corner is more open, so I would expect that black would be able to do even better than in problem 2. This is what the book says: 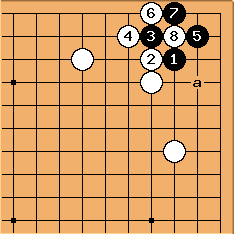 (There is a variation diagram saying that

at a, trying to kill the black stones, is unreasonable.)

Taken on its own this looks like a reasonable result; but comparing it to problem 2, I don't understand why black wouldn't play

to live without ko.

MrTenuki: According to the butterfly page, Black can even invade at 3-3 and live unconditionally in this case...

Dieter: some first thoughts, without much analysis 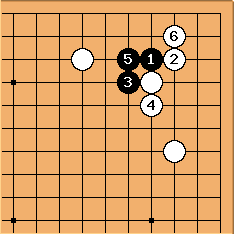 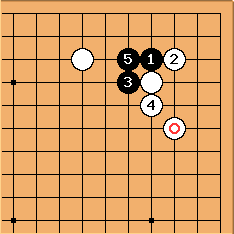 Here too, but White doesn't seem to have made the most of the marked stone. 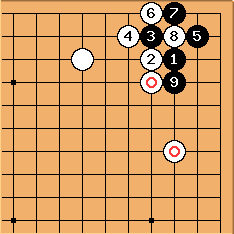 togo: I think the answer lies with the massive amount of inner ko threats, starting with

. Also, even when White finally would have captured the black group, White's marked ogeima would have been cut with the dead black group still having lots of liberties (or ko). So the ponnuki-solution is valid always when White is not the eternal king of all ko masters. I guess the most probable solution will be Black connecting his ogeima, and White living underneath.