This isn't so much a question as an article request. I read an article a long time ago about the following play: 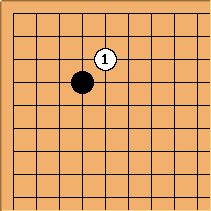 This move is almost universally bad (the article noted it as a beginner's mistake). Shown here, it's against the corner, but the article said that any third-line shoulder hit against a fourth-line stone could be considered similarly bad.

Recently, reviewing a weaker player's game, I wanted to link to the article in question, but was not able to find it. The article might have been on SL, so if somebody could find the link, that would be cool. Otherwise, could someone more qualified than my (rapidly declining) 2k self write such an article? Imagist

Tapir Hi, Imagist welcome back. Why is your skill declining? Stopped playing? 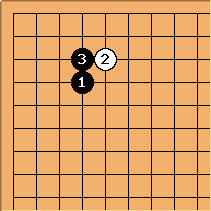 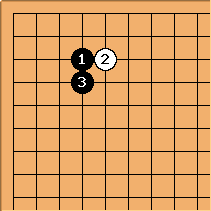 Herman: The closest I can find is never ignore a shoulder hit. And since this angle play from below gives the same result as ignoring a shoulder hit, it is also bad.

I will try writing a page about it: Armpit hit

You may find more interesting pages on the subject by clicking the binocular icon on the following diagram:

unkx80: There are special cases where the armpit hit can be good. Typically good usage occurs in an invasion setting where the armpit hit is also a two-space extension, and the resulting Block causes overconcentration. Some interested fella may want to search gobase or other databases.