Hard to capture on a large scale

This is a phrase of some importance in discussing strategy. It implies that a group (quite often a single stone) may come under attack, but in such a way that the attacker finds it difficult to take a large profit from an actual capture.

A closely related idea is the best way to sacrifice. That is, if you choose to give up stones, it is very helpful if their loss is restricted in value to not much more than the stones themselves and the points they stand on. The amount of extra territory may be large (a large-scale capture), or small. In the latter case the stones are often light. In fact you can analyse heavy play into two cases:

DJ: I wonder whether I could propose a third case of heavy (?) stones:

3. it is hard to give up a small group because it keeps two opponent groups separated.

But maybe instead of considering them heavy, we could say that such stones play a very specific role...
Charles It's a good comment: see divide and conquer. Perhaps point (2) should be stated more generally, as in 'the total loss of QARTS judgement would be too large'.

Another closely related idea is the open skirt. Since it is bad to defend territory open on two sides, it is probably good to allow an attack on a stone that has several rescue routes. Those don't have to be used to escape: in fact that can risk increasing a loss. They can be used 'from the other end': reach out to an attacked stone and thereby reduce the scale on which it might be captured. Note that such plays, pushing in from outside, are likely to be sente, while rescuing anything tends to be gote.

DJ: The concepts of the last paragraph are something so important that any beginner should try his/her best to metabolise them as soon as possible. Applying those ideas in actual games (especially handicap ones) can incredibly boost one's strength. (By one stone? Two?)

Charles Yes, I see this kind of thing quite often. 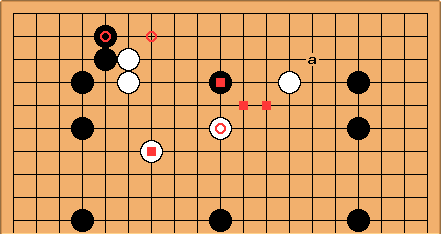 has a million variations, and I disapprove of learning them as joseki. But here's a general idea.

, whether or not it was good, Black has made an open skirt for the area White is trying to create around

Until White has prevented Black jumping in at the circled point, Black shouldn't worry too much about

is a sacrifice). But right now any capture White could make would be small.