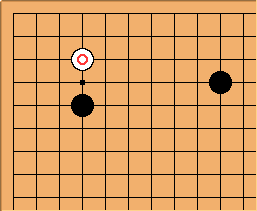 White has approached at

; how should the supporting black stone on the star point affect black's choice of joseki? I'm curious to hear what stronger players have to say.

The game that made me wonder about this continued like so: 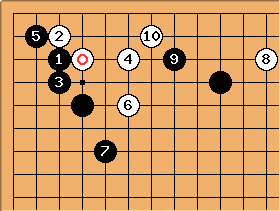 I was very happy with the way this turned out, but I may just have been lucky my oppenent made sub-optimal plays. We are, after all, only a couple of 5 kyus on KGS. Any thoughts on this? Macho

I would have done something similar to this: 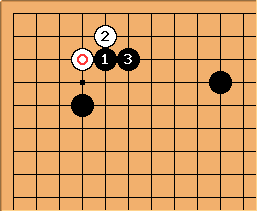 I think the knight's move emphasizes the center more and works with the stone to the right more. Plus, if you play takamoku, the corner territory is up for grabs anyway. From here white can either take the corner relatively easily or forsake it for a right side ponnuki that is already in a pincer.

My issue is at what point does the far right stone become heavy. My first instinct was to play this: 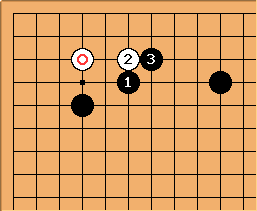 But after a the contact play at 2 it looks like the right hand stone will be made inefficient.

Regardless of all that, I think the appropriate move is to confine white to the corner or a very low side while building a power base rather than taking immediate corner profit.

For what it's worth I'm about a 5 Kyu too, so may be completely off base here as well. 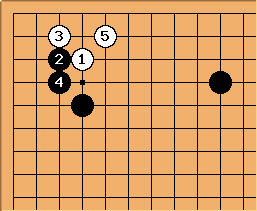 is the correct play in the corner for White.

are the correct responses to

. White gets great shape and has succeeded in wrecking half of Black's area of control.

in the following diagram is a mistake, I think: 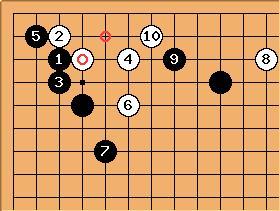 should be at the point marked with a circle.

to take the corner territory and the circled point remains a weakness in White's shape.

in the following diagram, White can be satisfied with

; no need for complications. Black hasn't gotten much for playing three moves in this area. 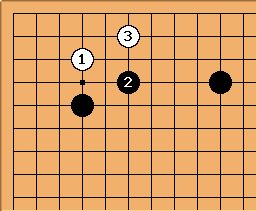