The 4-5 point is now played as opening move in a corner noticeably less often than in classical go, from the Edo period up to the introduction of komi. This basic position still frequently arises, though, after the 3-4 point high approach, when tenuki is played. Therefore the corresponding joseki are often applied. 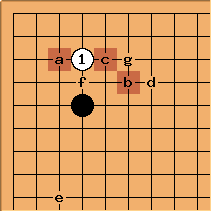 The most common answer to

is the inside contact variation, and the keima variation at b is also frequently used; the former aims to take up position on the left side, and the latter takes the key point for central influence.

The outside contact variation at c, much used by Sakata Eio, is today less popular than at one time.

The ogeima d can lead into very complex lines: the tenuki variation is recommended.

Extending directly to e, without playing out the corner, has been seen in pro games from the past ten years, when the left side is urgent. This is a candidate for a new joseki.

erikpan: Is there any advice on joseki involving a 'pincer-esque' move like g above? 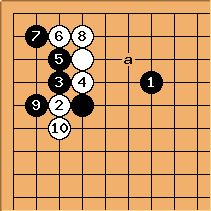 This ogeima variation can become pretty complicated. In fact

Discussion of the downward thrust at 4-5 point, 4-3 approach, thrust 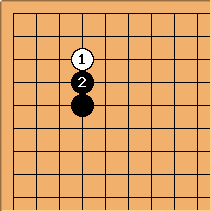 Dave As this is not joseki, i.e. not a generally accepted sequence (see joseki or more thoughts about joseki for guidence on what joseki are). It is more appropriately posted on Big Question Mark for discussion of why it is not joseki. Calling it a joseki may be misleading.