I haven't seen this before, so I don't know if this is a real joseki or not. Or maybe it is a new one? Does anyone have any thoughts on different possible variations, good situations to use this? --BlueWyvern 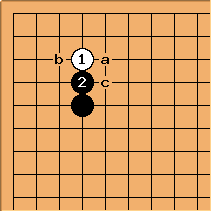 This is basically the opposite of the upwards thrust from the 3-4 point. It seems like a or b are the likely white continuations although c seems like it may be possible if the ladder is favorable for White. 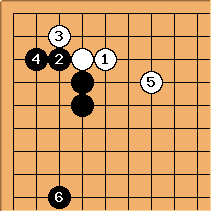 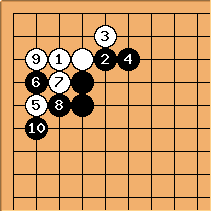 White takes the corner? rubilia: What´s the problem with w 9 at 10? 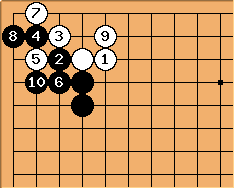 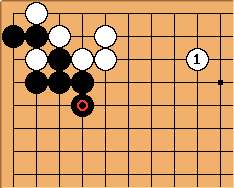 and extends to 1. The marked black stone looks a bit out of place.

JoelR: Two moves here confuse me. Why is

important? White can't advance further into the side. It does claim the corner, but if that's more important than the extensions, why doesn't White play

is consistent with Black's two-step hane. If Black wanted to cede the corner to White, better to extend as above. Also, after

Black does not need to extend on the left side.

, it gets complicated. Here is one variation. 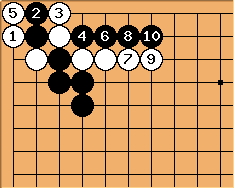 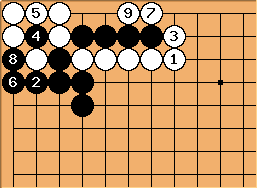 The saying is that there is no ko in the opening, so this is not so good for White. 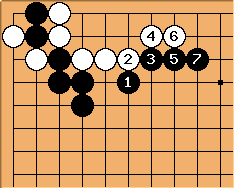 Here is another thought. After White ataris Black's two stones, Black can give up the corner and White gets a low position. 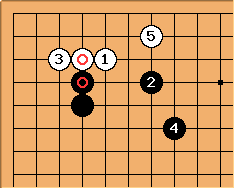 Black 2 and Black 4 work with the stones Black already has, but White gets a big corner. The exchange of the marked stones favors White a bit. 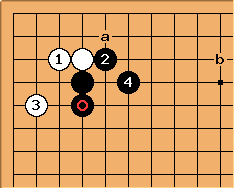 White 3 at a strengthens Black needlessly. After Black 4 Black is thick, but a bit overconcentrated.

Dieter: Is this because now White can play around b to negate Black's influence ? I like Black's position here.

Bill: I would prefer a Black stone at b to 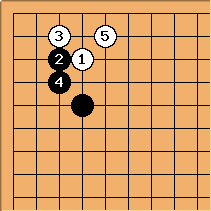 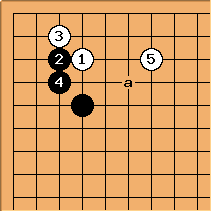 Black can choose a at move 2, going for thickness. With the downward thrust Black allows White to make the choice. 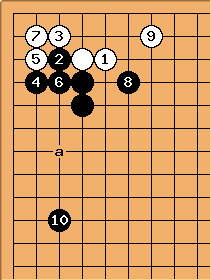 Dieter: From the 3-4 point, 5-4 approach, one space low pincer, thrust page, I assume this sequence is feasible. Normally Black attacks a white stone at a: that stone being absent, one may have the feeling that Black's play is a little vague with respect to White's firmly taking territory.

Bill: With a White stone on a, the two step hane does not work. 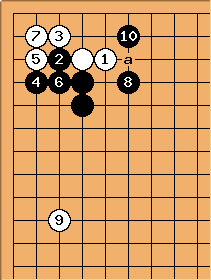 Continuing comparing this to the pincer variation, W can annihilate Black's influence in exchange for being shut in (maybe B0 better at a), provided there is no Black position below