I've been experimenting with Takemiya style in conjunction with some suggestions from Go Seigen about playing the san ren sei. I suck at this type of game, but I figure it's good to try new things. Here's a position from a recent game of mine: 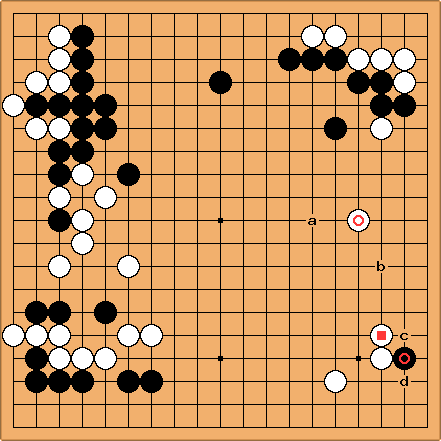 hhw: Maybe something like a? Expands your moyo and limits White's. Also may help set up a later move near b, to attack the lone White stone or give more options to the Black stone in the corner.

tapir: Hi Andy, you wrote moyo vs. moyo? Where is white's moyo? And isn't black ahead a thousand points? And... you really played the famous capping move?

xela: The area around b is a moyo. I don't see any black stones there.

Herman: I think b is a good move for black now. The white stone

is somewhat isolated, and this move also threatens to pull out

Dave: I think the first question is why not continue with the play at c? When White answers Black's probe in the lower right with the marked play

, she emphasises the outside. This looks like a mistake here because White will not be able to win with an outside game in this situation. Black c continues naturally, threatening to secure a territorial lead with no weak stones on the board. If White answers c with d, White is too thin on the outside to capture Black. White does not even have good prospects to make any significant territory while attacking Black. 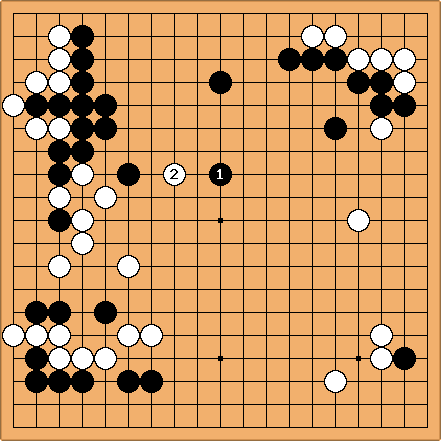 I tried the rather nebulous-looking

and white replied with 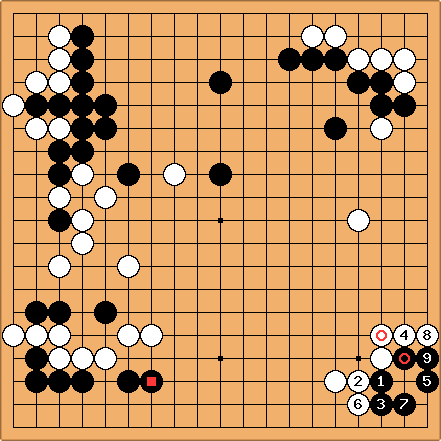 Where is white's moyo?

as a probe, white replied

. This means black can live in the corner in this manner by setting up the tripod group, which I eventually did, but then white becomes strong in the center, even though her moyo is greatly irritated by the

tapir: I know (I hope:). But you won't play this sequence before reducing somewhat from the outside, won't you? 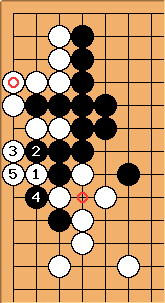 And isn't black ahead a thousand points?

Well, it's not so clear. I thought black had killed the upper left by forcing white into an L-group, but I overlooked this combination to connect out by white

with a ko at

. As it turned out, white managed to connect out and live successfully.

just appear out of nowhere? 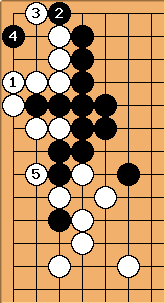 threatens to live at 4 next. If Black answers in the corner, the ko arises, no?

(in "the dead come to life!" diagram) or sth. to this effect - maybe not the biggest but a very big move. So black may play some reduction or so in the lower right and then come back and patch up here? 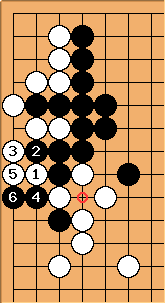 fractic: No ko to connect out.

is no help for White. Of course White can turn the corner into a rectangular six in the corner now. 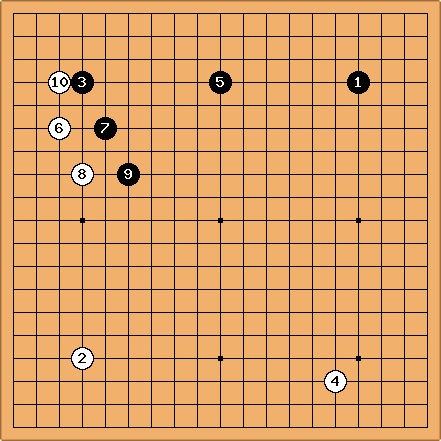 And... you really played the famous capping move? 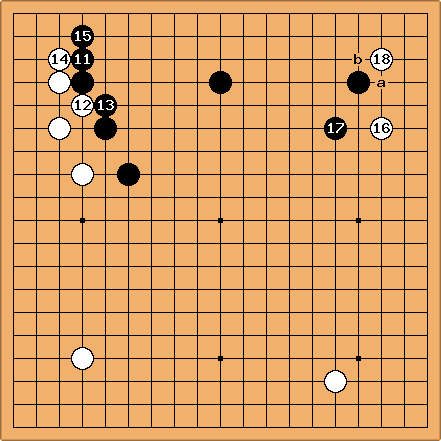 We continued like this until I chickened out and blocked on the wrong side at a instead of at b.

Embarrassingly enough, white connected out in the upper left, and I did a really poor job of stopping white's incursion into the top, and white got an enormous lower right middle to win by 35 points, hence my cry for help with this BQM!

tapir: The wrong side? Isn't the advice from Go Seigen to block on this side? (Sonoda Yuichi - in a somewhat resembling position (-> cap page) blocked at a as well.) As I've put together the page on the cap, I pretty happy to see this BQM. I hope for help on the cap page comes forward after this discussion :)

Andy: Now that I look it up, Go Seigen does indeed suggest blocking at a[101]. I only remembered the first few moves of Go Seigen's and figured I would wing it from there. :) 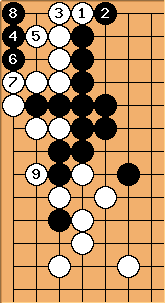 For some reason I thought

needed to be answered. 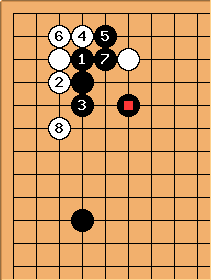 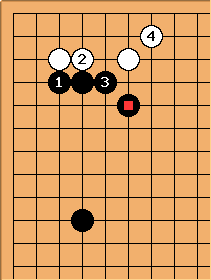 is half-asleep, and this does not put Black in a good mood."*

Somehow, whenever I try to follow the advice of these 9+ dans, it always goes horribly wrong. The capping move seems designed to build a moyo based on the san ren sei, but then you're supposed let white wreck this concept by forcing white to extend from the corner straight into the san ren sei. What is up with that? 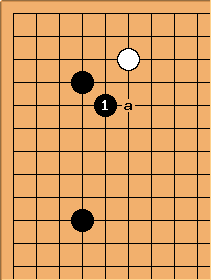 Of course, Takemiya's move is not the capping move at a, but rather this

. Maybe that's what I get for blending advice from two different 9+ dans. :/ Dave: I am not sure exactly what comments led to the belief that the san-ren-sei is about moyos. Below is the final position from game 3 of Takemiya's defense of the Honinbo title against Yamashiro in 1987. Show me the moyo here! :-) San-ren-sei as played by Takemiya was all about attacking flexibly. The frameworks (moyos) that he built early in the game were temporary structures that naturally disappeared in the later part of the game.

Andy: Thanks Dave! That has really changed my understanding of san-ren-sei! I don't know where I got that impression from either, but I appreciate having it dispelled. This opening is much more flexible than I thought. High Concept Opening Myth maybe?

tapir: Dave said it alright for Takemiya... but here the advice comes from Go Seigen, hearing this name I associate fast development etc. and not moyos at all. But who has his book with the chapter on the capping play? 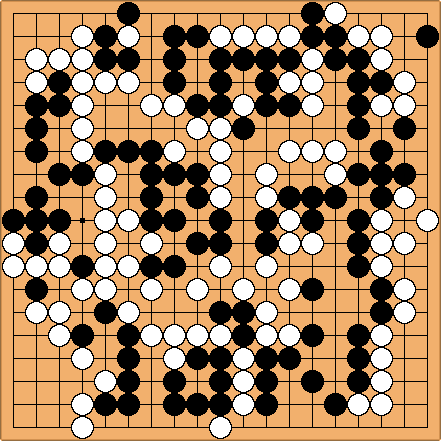