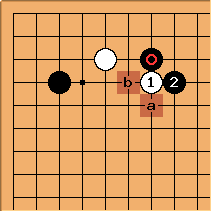 In reply to the pincer

is essentially always answered at

Now there are distinctive variations with White at a, or at b. 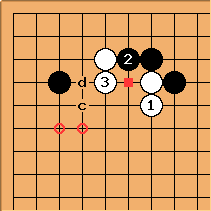 can also be played at c or d).

Now Black has to decide between pushing through at once at the square-marked point (the degiri of Kubomatsu) or strengthening the left side at one of the circled points. 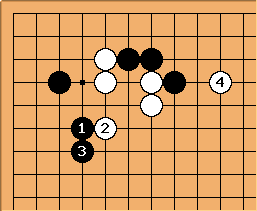 for a table shape and 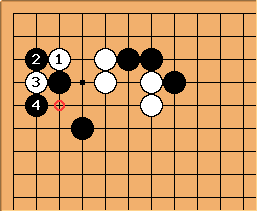 There is also a more rapid way to play:

to cross-cut. White can play next at the marked point. White would like to gather strength without making the

exchange above. This idea, however, may not be current in pro games. 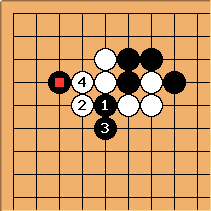 If Black goes ahead with Kubomatsu's play, up to

(This idea dropped out of pro practice, a generation ago.) 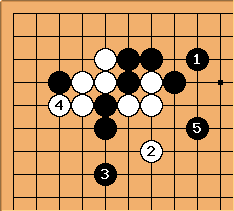 , something like this can be expected. Black's loss in the corner is large. In return he can attack White's floating group. 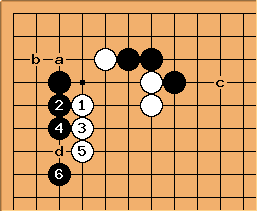 As indicated earlier, the press at

is also a joseki. Note that Black must crawl two times with

before jumping out with

. Subsequently, White may exchange a with b, before attacking the Black group on the top side with c.

It is easy to mistake this joseki with the very common 3-5 point low approach, press joseki, and to have

directly jump out at d. This is the subject of RTG Problem 16. 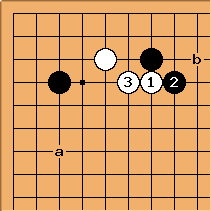 There is the calmer option of

. The areas of a and b become miai. 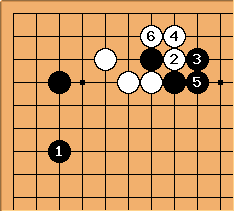 , the local joseki ends with

. Black may well have to defend on the upper side. [3] 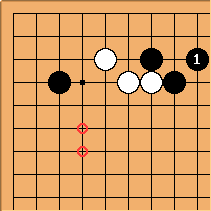 to secure the cut, White will attack, probably at one of the marked points. 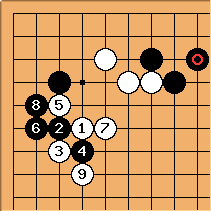 may presuppose a good ladder after 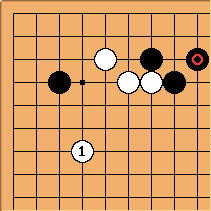 has been played by Cho Chikun. Black may well now play tenuki, an idea that goes back to Shusaku. White's attack isn't very severe. 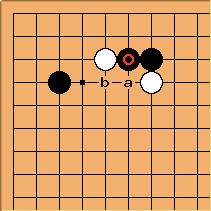 Alex Weldon: How to answer if Black plays here? Happened to me in a game and I screwed up and got a very bad result. a seems natural, since it gives Hane at the Head of Two Stones (making the marked stone look like a bad move for Black, which it probably is), but what's the best way to handle matters if Black then cuts at b? Seems like the marked Black stone is kind of hamete, given what happened to me in the game. 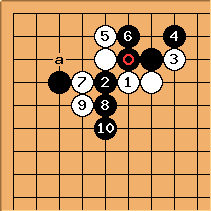 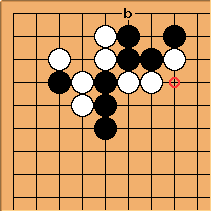 don't forget black at the circled position after a...

Tamsin: I quite like White's position here. Black hasn't yet captured the outside stones, and White is already taking a lot of points in the corner. My feeling is that White's profit is going to outweigh Black's thickness in this case. Anyway, it's not clear to me whether this is the variation Alex doesn't like or if it's the antidote to it. From here, I'd be inclined, as White, to push once more below 10 to make sure Black's 3-4 stone is blighted and then look for ways to use the deadish stones on the outside later in the game.

Tapir: I would like to force once at b here (before a) as playing kikashi before defending, if black answers which imo it should white takes the whole corner in sente, for black can't really omit the circled stone (or would not as 2k at least :).