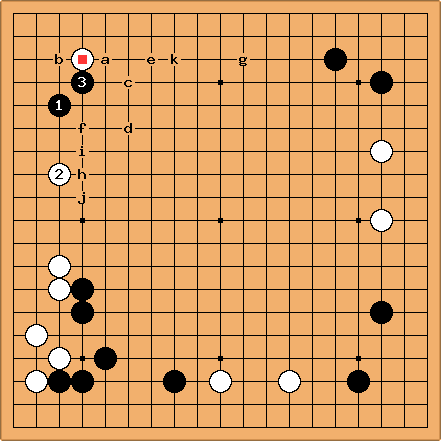 is played with the idea of being a pincer and extension. When black plays

, how to proceed for white? a lets black take the nice shape point b. If white plays b, white gets pressed low or shut in by black c. Any suggestions?

zinger: Kogo's also gives Wb, Bc Wa, Bd, We as joseki, besides ideas given below.

Velobici: That line of play (Wb, Bc Wa, Bd, We) is labelled Black stones are thin in the 25 August 2005 version of Kogo's Joseki Dictionary. I would venture that

may be incorrect direction of play since there are no White stones on the top at this time. Perhaps Black should play to settle quickly in the corner at either f or at b. b provides the possibility of a Black playing g to expand the top right. h is not good for Black as White may choose the inside hane at i and gain on the top. To hope that White will respond to h with the outside hane at j is too much. Yang Yilun's Whole Board Thinking in Joseki addresses issues such as these. See the Sample Problems on the Whole Board Thinking in Joseki page.

Bob McGuigan: A not-very-thorough search on GoBase and in the joseki books I have suggests that

may be a mistake. The sequence from Kogo's dictionary quoted by zinger doesn't look like a joseki to me. In the case of a low three-space pincer then

is a standard move, and pulling back to b is a possible answer, depending on the whole board position. Then Black's hane at a followed by White's cut leads to a sequence in which Black gets the corner and White gets outside thickness. But in the diagram here the pincer stone is one line closer to the corner so that sequence may not be playable for Black, leaving the line suggested by zinger. In that sequence Black's stones do look thin and White is strong on both sides. It doesn't look satisfactory for Black compared to the territory-thickness result for the three space pincer. With the two-space low pincer, if Black wants to attach on the corner stone, I think the correct third move for Black is to attach at b rather than

, I think this is a perfect board for a counter pincer, e. g., at k or e. Black has little threat against

, and developing a moyo on the top will make efficient use of his stones.

Thad: What do you want to do? 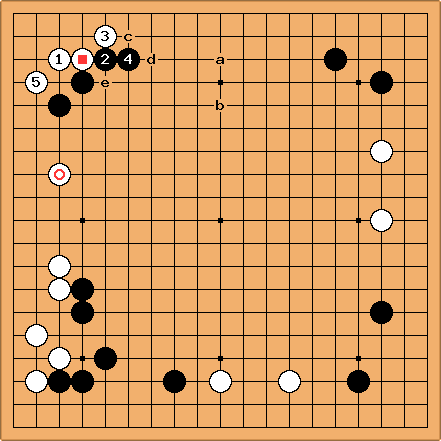 You can take the corner, if Black wants he gets the side with a but it is very open and invadable ( or even reducible).

is wrong technique here as well as wrong direction. c is the interesting territorial point, since

Alex: Agree. If White is going to take the corner, c is mandatory.

should cut at e. This is given in almost any joseki compilation. Also I think that crawling on the second line with white c, black d is bad even with

there. Nevertheless, some strong players seem to think it's OK, so I may be wrong.

Bill: I agree with zinger. Besides, IMO, White has fallen behind and needs to make opportunities to get ahead. (More on the /Discussion page.) Just living in the corner is a slow way to resign. For that reason I think that

in the original diagram would be better as a one space pincer. Fight fiercely! 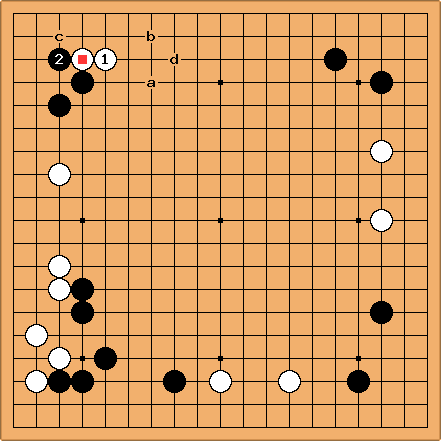 Dieter: I disagree. After

at c is almost compulsory, because it is such a severe threat for Black's shape and also helps White's shape.

Alex: Agree. c is sente and the only move. Afterwards, White can continue pushing into the corner as Dieter suggests below, or a would make sense if the right side was large. However, b makes no sense in almost any context; why would White play on the second line without necessity? 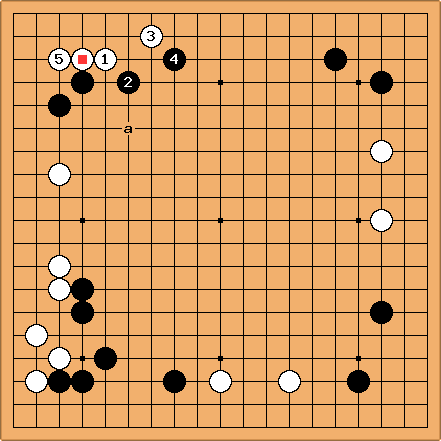 here is wrong direction. Black's stones are scattered and their influence is negated.

Alex: I don't like this either. Both the top and left sides are low and strong, so first of all, influence is of little use and second of all, making thin shape is very dangerous. Black will get cut to ribbons playing like this. I think

is playable in cases where influence is desirable (e.g. when the pincer stone can be counterattacked), but then a, not

is the vital point for shape.

tapir: As Black I would settle for the corner. Indeed, most of the times Black touching White like this tries to settle in the corner. And taking a little of both usually don't work.

in my opinion, after 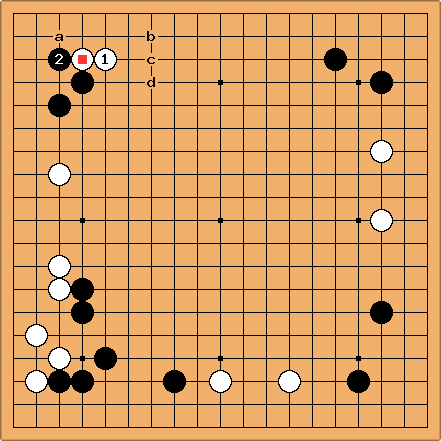 Dieter: No. As said, White a is the only move. 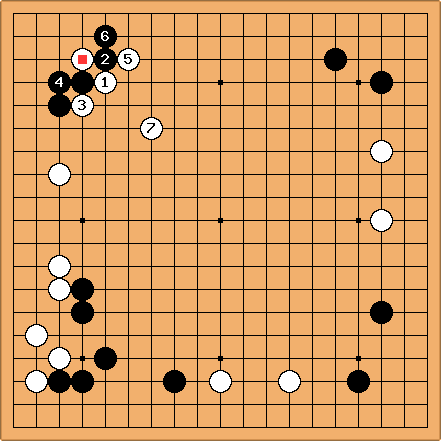 Alex: This diagram shows some thinking, but the context is all wrong. Playing lightly like this would be desirable if White was seeking sabaki deep in a Black moyo. Here, White is stronger nearby than Black, so it makes little sense to play like this. Besides, Black's territory is much too big for the influence White gets, and that influence is of little use since no one has a moyo.

My favorites are the first (where I play the cap at b and build center strength to offset what Black got ), and the last. Depends on how I feek that day. 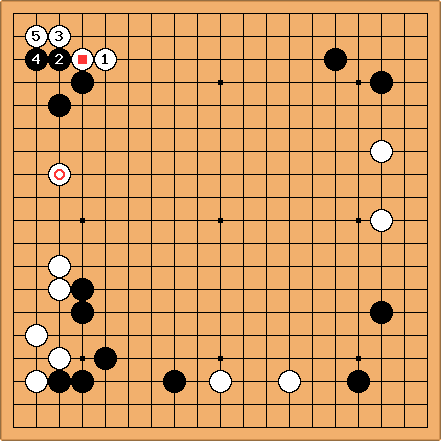 Dieter: My favourite is this one. The marked stone works well in pressuring Black. White takes corner territory and does not develop along the relatively uninteresting top.

Alex: Agree. Black is not yet alive and has no way to use his influence. When neither adjacent side of the board is interesting for development, grabbing the corner is the first priority.

IanDavis: Me too. Initially I thought it was Black's turn and wanted to play at this point to use the right hand side, I think a White play here seems to be correct. (3kyu) 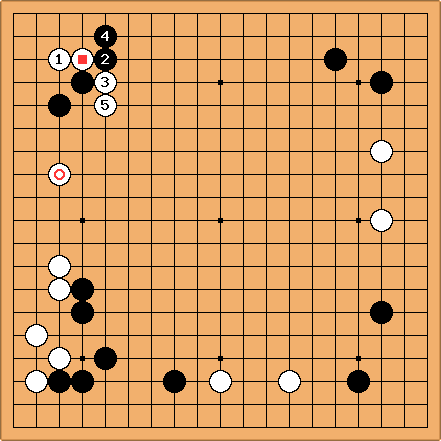 tapir: If White retreats with

, but there is plenty of opportunity to mess up for both players here.