There are some complex joseki which haven't been researched to a conclusion, usually for tactical reasons.

Top pro players these days don't often get involved in unclear joseki in their games, except in some cases as a demonstration of fighting spirit. That is one reason why such lines don't get clarified. Ambitious middle-ranking pros often try the most difficult joseki on each other; but such games aren't typically published. What appears in books or magazines isn't a reliable guide.

gaius: wait wait, what? This text is clearly outdated, go find any Lee Sedol/Gu Li/Iyama Yuta/Cho U game and you'll realise that contemporary go is all about super-difficult complicated josekis...

Phelan: The last edit to this page before your post was in 2003. It's very possible that it is now outdated.

One might guess that the title-winners spend far more time on fuseki research than on secret weapon joseki. Finding absolutely the correct joseki choice in an opening pattern isn't the same thing as exploring all variations. Contemporary go in fact uses many patterns of play that aren't conventional joseki in the sense understood a generation ago, a state of affairs that came in strongly with the Chinese fuseki. 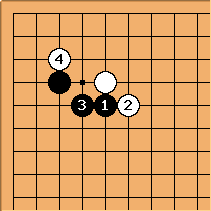 This seems to be an example: there are probably no set continuations after White 4.

DaveSigaty: I think this page raises an interesting question about the way we use the term "joseki" in English. We often use it to mean any sequence played in a corner. However, this is not its meaning in Japanese. As we have quoted Ishida on the Joseki page:

"A sequence only becomes joseki when it is played in actual games, is subjected to opposition and is able to stand up to all criticism. A sequence which contains irrational or unnatural elements or which gives an inferior result for one side will hardly meet with universal approval."

It would seem that there are no "unexplored joseki" in the Japanese meaning of the term. There are unexplored corner sequences that have been tried a few times but never followed up in depth. Even if they appear in the joseki dictionaries, however, they do not carry the marks (the little diamonds in Ishida) that signify joseki.

Charles There is a nuance here, though: as well as patterns for which no set sequences have emerged, there are difficult variations within what are well-known positions, sharp lines that for example would be played by top pros in a TV game but not in a title match. I suspect that if one goes deeply into joseki study one can find many such things; I have been struck in the past at the way some 'innovations' are in fact old Chinese plays. It's certainly a more complex area now, given that something may be 'known' in Korean games but not in Japan, and so on.