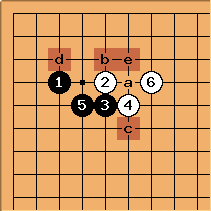 used to be the standard move in this joseki, but nowadays the solid connection at a is gaining popularity. Black has various options now. He can take the corner with b, go for a pushing battle in the center with c, or play elsewhere, in which case White can play at d. Black e used to be joseki, but a refutation has been found, and it has been replaced by Black b. 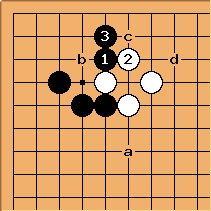 takes the corner, after which

are standard. White, satisfied with her strong shape, often plays elsewhere, or extends along the upper side. She can also play at a to build influence towards the center.

White has the possibility of starting a ko by playing at b, however she should not embark on this ko lightly. If White loses the ko, her position will crumble. If Black feels a need to remove the threat of the ko, he exchanges Black c for White d. 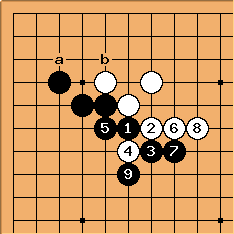 , both players push towards the center.

is forced, after which Black pushes on unrelentingly with

. Black makes a magnificent wall towards the left side. Although these moves end the joseki, there is still a very big move left in the corner. The difference between White a and Black b is large.

Imagist: If I'm not mistaken, this joseki variation is also an appropriate response to capping plays anywhere on the third line along the side, not just on komoku. 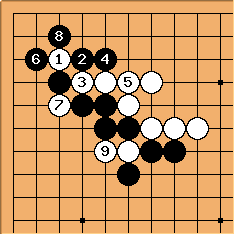 here is not possible. After

, the three black stones in the center have become worthless. Black's relatively small amount of corner territory does not even begin to compensate for this. Instead of

, Black can of course play at

, but he also has another defense: 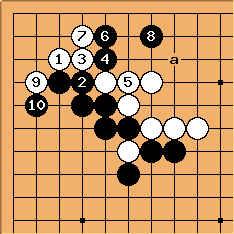 Black can also play at

is forced: if White does not remove a liberty, Black can jump to a. After this we get a semeai in the corner. 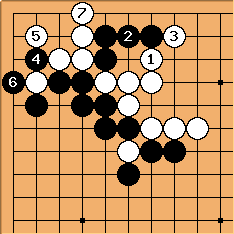 After the previous diagram, this is the follow-up. White 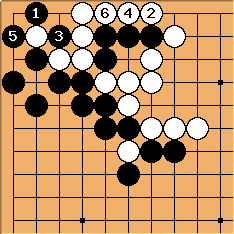 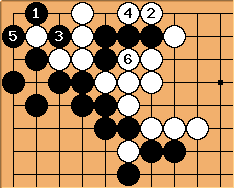 , White has to obediently fill in a liberty with

, otherwise she will get a ko or even lose the fight. Black thus is able to capture the corner in sente, and is satisfied with the result. 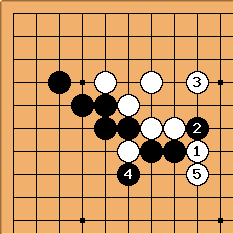 White is of course not just there to follow orders. If she is not satisfied with the results in the previous diagrams, she can play hane at

rather than extending at a. Black counter-attacks with

, after which these moves show some variations. 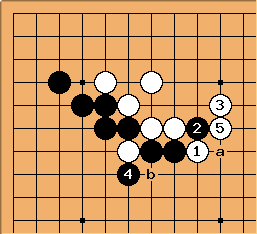 is an interesting move: it depends on a ladder. If after

and White a, the ladder at b works for White, Black has to give in with

, and gets a peaceful result. 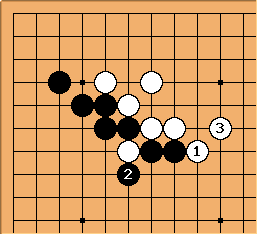 The peaceful move of 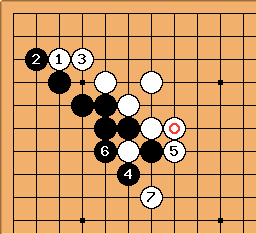 Going back, Black sometimes plays tenuki after the marked white move. White might for example take the corner with

, white has a good position, but that is only to be expected since she has had one move more in this corner. Black apparently was of the opinion that there was more to be had elsewhere. 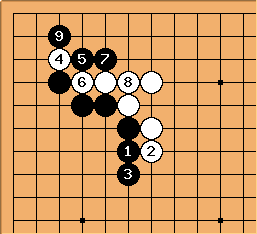 is an old variation, now regarded as insufficiently severe. An advantage is that White

is now impossible. After Black

, White has no defense. 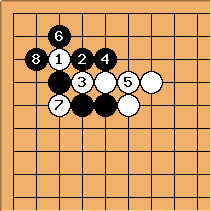 is common. The sequence to

is standard: after this White has two choices. For Black to answer

, followed by a white play at

, is considered too submissive. 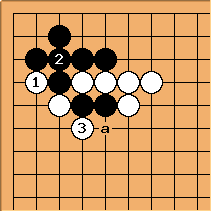 If the ladder is favourable, White can give atari at

, then play the ladder at 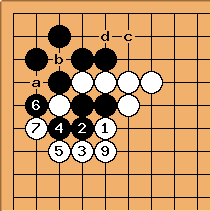 Whether or not the ladder works, White can squeeze with this sequence. In this case, white normally does not exchange White a for Black b, because leaving out this exchange increases the aji of White c and d, etcetera. 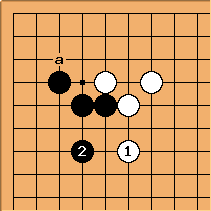 is also a possibility, but White has to keep in mind that after

, White a is no longer possible. 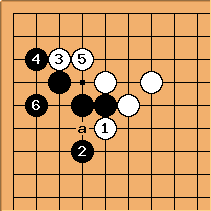 The white hane at

has as its function to make a black answer

impossible. The sequence shown here is from Frank Janssen and Ronald Schlemper in the 1990 Dutch Championship.

dates from 1976 in pro go: may have been invented by Yamabe.

at a is normal. 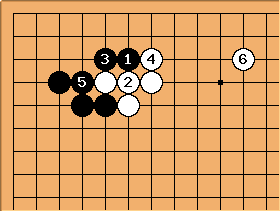 This sequence used to be joseki, but is nowadays regarded as good for Black. Nevertheless,

is not played anymore, because a splendid white refutation has been found. See Hakugen Incho Joseki.