The "Hakugen--Incho Joseki" is a rare continuation of the 3-4 point high approach outside contact, tsukehiki hanging connection.

According to Waltheri, it was first played professionally by Honinbo Hakugen as Black against Hayashi Incho in 1744. It was later played in 1820 and '28; in 1916, '26, and '34; and twice in 1938, as well as possibly later in an undated game of Hashimoto Utaro. Hashimoto seems to have been especially fond of the joseki, playing it several times. 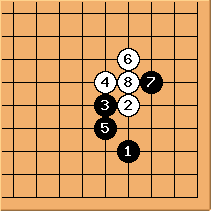 It begins like this, which is already an old fashioned setup. 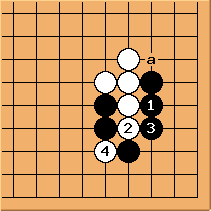 It continues with the push and cut, with

being the start of the joseki proper. Another joseki, played from 1799 to 1893, proceeds with

at a instead (after which Black protects at the 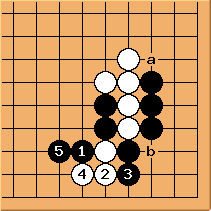 A close struggle ensues. In the older games, White would now turn at a. However, in the 20th c. (with the exception of Onoda--Hashimoto 1938) White would instead cut at b. In actual play, the two move orders reconverge later, but presumably a new defence against a had been found between 1828 and 1916, which it was thought that Black should avoid. 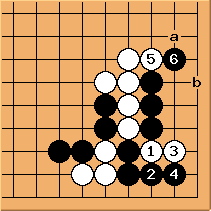 This is the newer move order. In the older order,

was exchanged first, and then 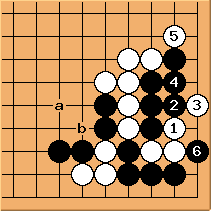 In all other games, though, White made this squeeze, making

sente. Here there is a branch: whether to peep at a or cut at b. 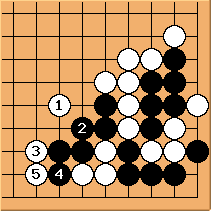 After the peep, White can squeeze from the left. 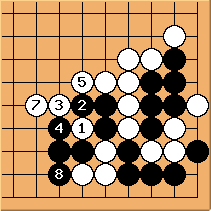 Whereas the cut allows White to squeeze from the top instead.