Dieter: the following analysis can be found at 3-4 point high approach outside contact, tsukehiki hanging connection 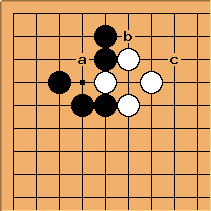 White has the possibility of starting a ko by playing at a, however she should not embark on this ko lightly. If White loses the ko, her position will crumble. If Black feels a need to remove the threat of the ko, he exchanges Black b for White c. 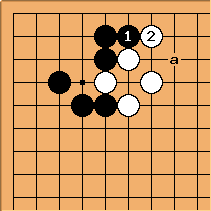 If the ko is so troublesome for Black, then White should be in a position to increase its value by playing

I assume that now Black can force White into a heavy position, as follows: 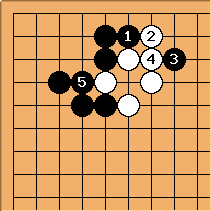 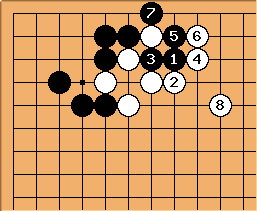 White can play this way too and get a good result, IMHO. So, the question remains why White would play lightly as suggested with c in the first diagram.

unkx80: I am not 100% sure, but allow me to make a suggestion using the following two diagrams.[2] Remember in either case, Black takes the ko first. 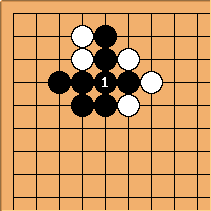 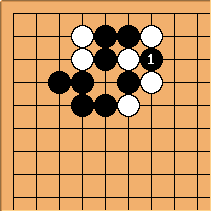 Dieter; That sure could be a reason. So if I understand correctly, White's move doesn't increase her gain from the ko as much as it increases Black's.

Charles Looking at the way the pros play it turns out to be quite interesting. 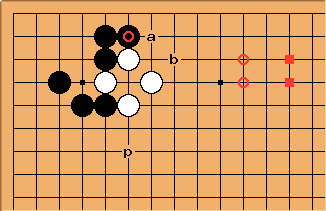 is played, White tends to play at a if there is a white stone already in place at a circled point (or closer). If there is no such stone, or a more distant white extension stone (for example at one of the square points) White plays at b for good shape. Sometimes White just jumps out to p to defend the group.

dnerra: This has little to do with the ko, of course. Permitting the peep at b is a shape disaster if White doesn't have an extension yet. The group would become extremely heavy.

Dave: Keep in mind that the ko is not this straight forward. 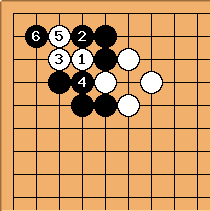 If White tries to start the ko with

, Black can answer at

. White has to continue with

if she really wants to play the ko. When Black cuts with

he threatens to capture two stones instead of playing the ko. White has to play on the inside. However,

is a well-known tesuji that captures the three stones. So... 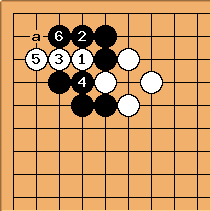 and White looks dead to me. What do you think?

Charles I think that if this were a tesuji problem,

would be at a. 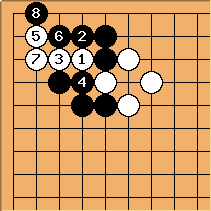 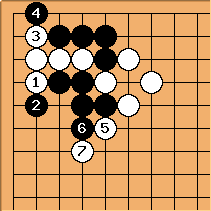 IF Black refuses to play the ko. 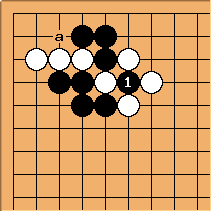 So it seems like Black might as well start the ko at this point. However, now Black has a lot of internal ko threats, starting with a. This seems like a very difficult ko for White to fight. Charles I think perhaps this isn't quite the right question. 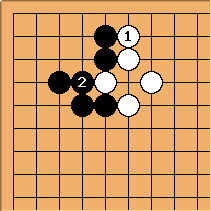 here is a play that Black should take quite seriously. The temptation to answer at

So this area is going to be something like 'sente for both', depending on the ko threat situation. If that seems favourable to White, then Black's play to forestall White is arguably more urgent.