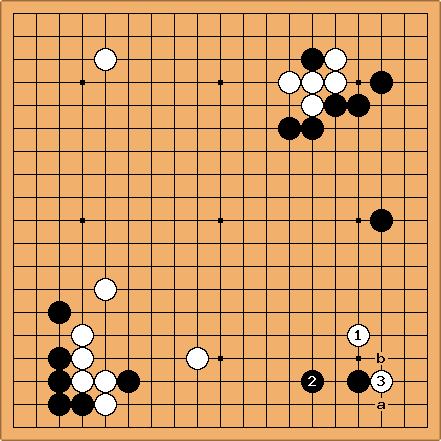 Dieter: In the Belgian Championships final (round robin with 10) I played two games with the lower side constellation, both times I played

to frustrate White's influence. For

I played each hane a and b once. 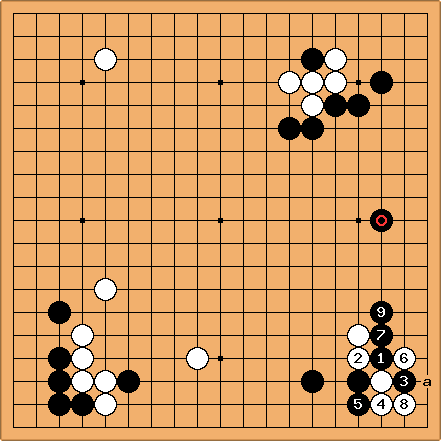 In this game (which I unfortunately lost) White played a variation which is not considered joseki. In particular, with the

stone present AND the killer move of a waiting for Black having enough liberties at the outside, White's cutting stones end up very weak. 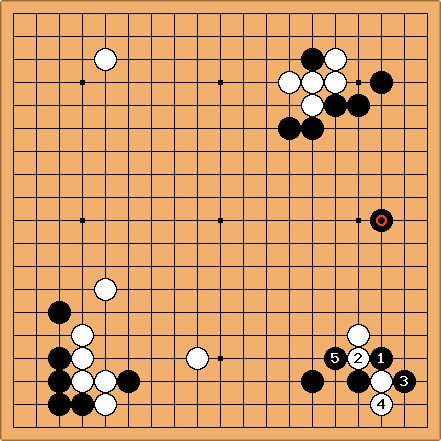 Hicham:I got this idea from the first Goama. The "tricked" variation gives White the corner and Black overwelming influence. The refutation gives White influence and Black the corner. Thing is that it end with Black having the next move, so he can blunt White's thickness, and build a position with B.

is indeed a know trick play. In my opinion however, several of the diagrams given in Goama issue 1 are wrong.

Diagrams available here. In diagrams D, E and F for example, the atari with

is a mistake, because without the

exchange, the geta that black plays later on would not work! There has been discussion on this variation under BQM186 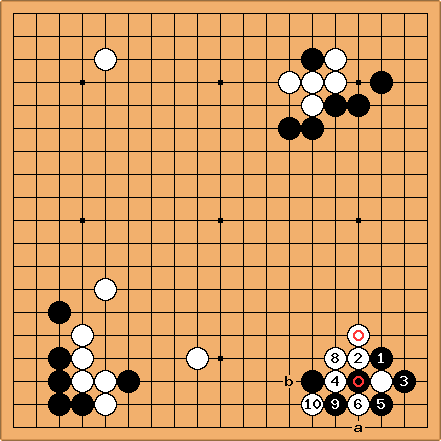 . I believe this is bad for White, given the ladder aji, the thinness of the moyo and the poor position of 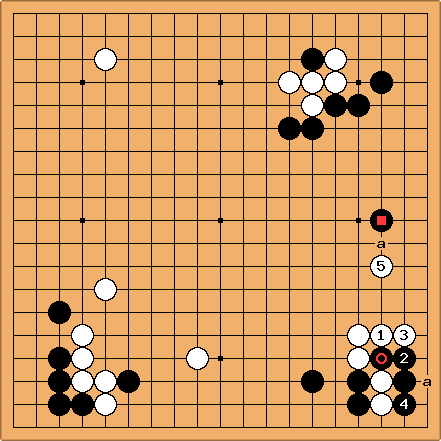 The nice thing about

, is that this joseki needs a White extension at a, which is impossible due to

a "trick play" and says that the sequence in the adjacent diagram, with

, is a sufficient refutation. He points out that black could have played as shown in the next diagram. (page 17 of the book.) 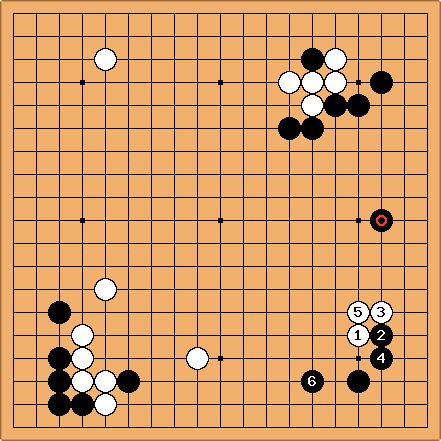 Should White play this way, she is even more cramped by

, and her wall is one stone less high. 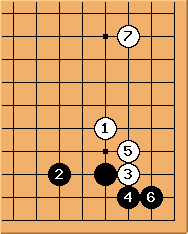 For what it's worth Jiang Mingjiu also says that Black's position is low and unimaginative, so this joseki is rarely seen in modern play. I'm not qualified to say whether this may be justified under these circumstances for Black to force his way out to the left.

Charles In this game position, this looks to me like quite a good choice for Black. 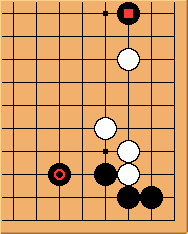 Here it seems to me that both

are working well in limiting White. 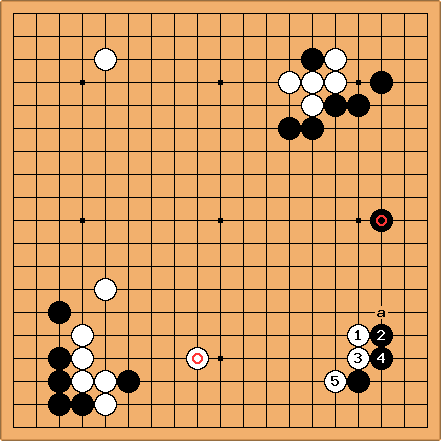 because I expected the avalanche move at

and didn't want White to build additional influence towards

. It is too much to expect

at a. I played the inward hane because

refutes White's refutation of it. It may not be joseki if no other stones are present, but I'd like to know whether it is still advised against when 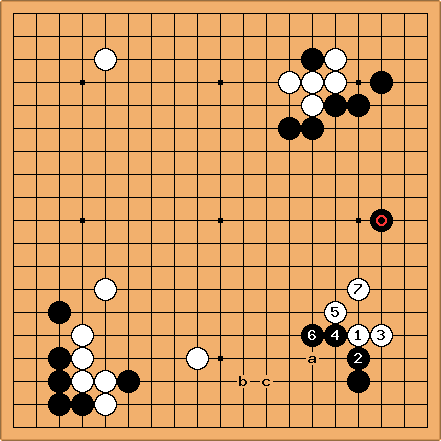 Bill: I, too, would worry about the nadare. In such a case, the butt,

, is a preventative. This is a likely continuation. If

, Black replies at a, and

, can we say that due to both positions being high, the lower side is important for both and that the stabilizing moves of b or c for Black or White respectively, are urgent ? 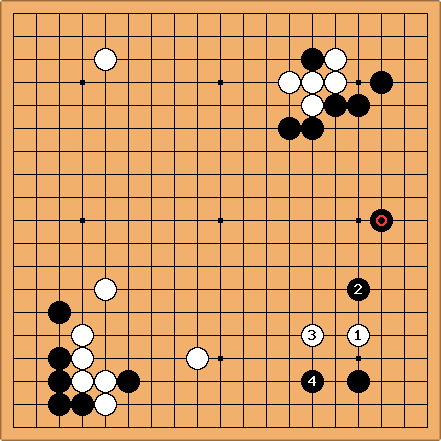 Dave: Did you consider and reject the pincer at

seems to be along the lines of what you wanted to achieve. 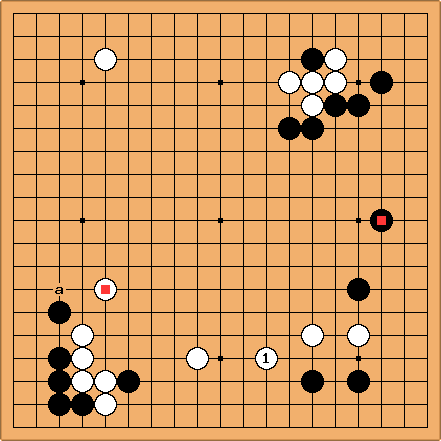 next, aiming at White at a and a game based on influence. Black has played from the thick side, so White keeps away from the top right.

I have to say this is quite an odd position. The

stone on the right side is not so well balanced. White approaching is not very well co-ordinated with the lower left wall (which is not quite the joseki result anyway). Normally Black is quite respectful in answering

Dave: I would agree that there are some interesting aspects in what has come before. The keima on the left looks too early to me. If Black had simply answered at a, the original White pincer stone would have been badly overconcentrated. White would have had to approach the bottom right from the bottom side to make any sense out of the position I think. 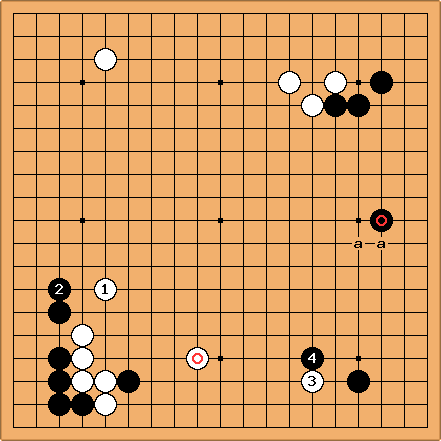 Dave: It looks to me like the marked White stone is overconcentrated (of course Black wishes the marked Black stone were on one of the points marked a as well). White has a difficult time here I believe. Playing from the direction of

Charles It's certainly an interesting study. Not to give the players a hard time - it is well known that positions in which both players have erred are much harder, if one wants to draw any definition conclusions. 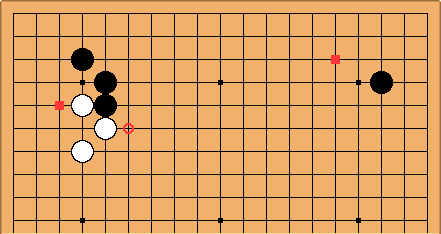 One thing that comes up: in this position the main pro choice is the circled point, to play into the pushing battle line The squared points are seen, too. But no examples of extending to the middle of the side. So that is perhaps a bit lukewarm.