This is an attempt I made at making a concise code to describe opening formations by their constituent parts, without resorting to coordinates. The idea is to be able to refer to unusual formations in a textual medium without having to refer to images -- for instance when making a table of formation winrate.

The system works by first describing the situation in the two corners. All stones described by the code are the same colour, as it sets out to describe a unicoloured formation. The opening points in the corner are indexed by seven codes:

The codes for the non-symmetrical points (k, m, ta, and ot) must be inflected by the directional markers < (outward-facing) and > (inward-facing). A stone is facing inward if it is closer to formation's shared edge of the board than to any other edge. An outward-facing stone is obviously the opposite. The inflectors are placed before the codes that they inflect.

Shimari are indexed by seven codes, this time numerical. These are:

A shimari is considered to be facing inwards if the line connecting its two stones is more perpendicular to the formation's shared edge of the board than it is parallel: ie. the smallest angle between that line and the edge of the board must not be less than 45°. Shimari codes take the same two inflectors < and > as the corner stones. However, they are assumed by default to be inward-pointing and so only < is a required inflector.

The final major part of the system is the side points. These are stones in the middle of the side. There are five side points, which are indexed alphabetically and prefixed with a tilde (~). 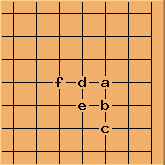 As a last touch, there is a one-off code "tn" that represents tengen. The structure of the overall description of a formation is:

Only features that exist in the formation have to be described.

Now, five uncommon openings. For these, I'll use accompanying diagrams.