Don't take away your own liberties

A common mistake in Go, is taking away your own liberties. 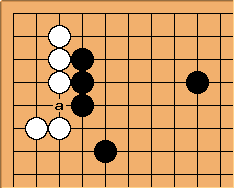 White has taken territory and Black some influence. It is tempting to reduce White's territory by pushing at a. 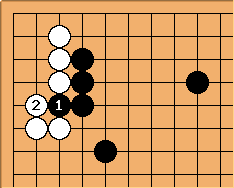 , Black's liberties are reduced from six to five.
As his formation is still open to invasion, reduction or attack, losing a liberty is too high a cost compared to White's cost of 1 point at this stage.

Furthermore, this move loses a ko-threat, but that was not the issue here. 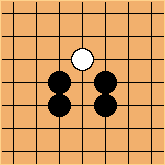 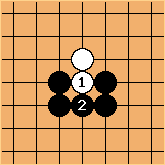 A vain attempt to cut the bamboo joint: White's stones now have three liberties.
This will always be bad (exception if played as a ko threat)

Almost as bad as losing a liberty, is playing but not gaining any liberties.[1] 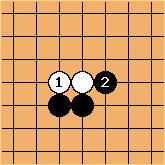 leaves White with three liberties: the same number as she had before. This is one of the ideas behind hane at the head. 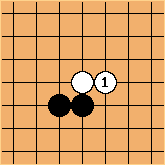 here, whatever Black does, she (White) will end up with at least four liberties for her group. 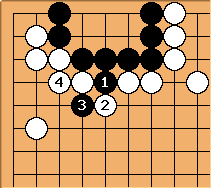 to create weaknesses, but... 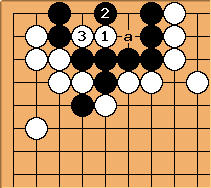 ...because of shortage of liberties, he can no longer play a to make a second eye

This proverb or heuristic also is at the base of the proverb telling you to fill outside liberties first in a capturing race.

tderz: the two examples above are very good as a first instinct reaction ('gain liberties', 'stay ahead', 'play/avoid hane at the head of two'),

but do not necessarily show bad play: 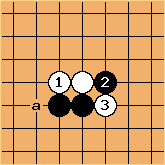 tderz: if White's intention is to cut at either

or a, then this might be the (only) way. 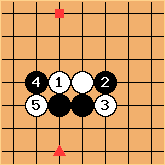 leaves White with three liberties: the same number as she had before. This is one of the ideas behind hane at the head. -> if the surroundings allow and the situation fits, Black may be cut & in a bad/worse situation, as both only have 2 liberties. 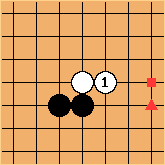 tderz: this is espec. good & important if the direction

is the route for escape/attack.

tderz: this is not a perfect example in my view. 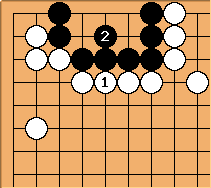 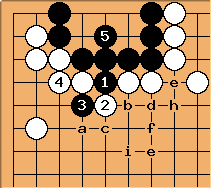 can thus also be considered as a good reverse sente,
as it creates a weaknesses (of course, Black has to come back and defend).
Continuations could be a-b-c-d-e or c-(f, h or i) etc. 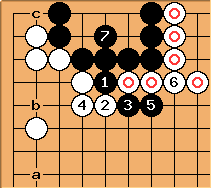 goup is heavy now and on the left there are imponderabilities as a + b + c.
I certainly prefer defects in opponent's wall + split groups in gote over
being forced to accept a perfect wall in gote.