Go Player's Alamnac: sagari: Descent. A move which extends solidly toward the edge of the board, without touching any opposing stones. 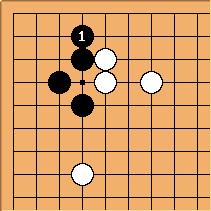 Bob McGuigan: Sagari is a non-go-specific word in Japanese which comes from the verb sagaru meaning "hang down, dangle, come down". I think descent is simply an English translation/equivalent and there is no difference in meaning.

Bill: The infoseek definition for go specifies that a sagari is a descent from the third or fourth line. That is in line with comments by John Fairbairn that a descent to the first line is not a sagari. However, I have some Japanese go books from the 60s and 70s that do call such a descent a sagari. Japanese usage may have changed since then.