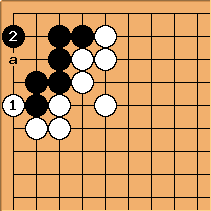 plays at a? Will it live? If both can make Black live, which is better and why? Thanks for the answer.

unkx80: The following two diagrams should show the difference. 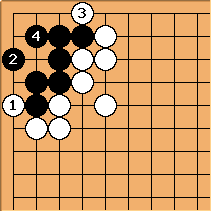 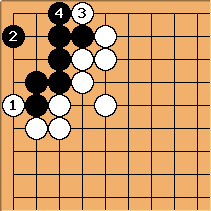 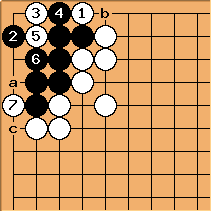 [13] Answering this hane at 1-2 leads to disaster. Black can't play 8 at a because of shortage of liberties. If Black 6 at a, White 7 at 6 kills: see rectangular six in the corner.

I may be missing the bleeding obvious here - but doesn't Black 6 at 7 give life for black? 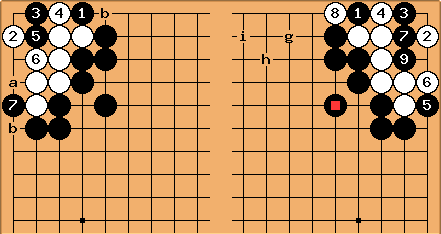 [14] tderz: Above right variation would be an improvement over dia [13] (= this left diagram).

is a mistake here, if

does not lead to an escape or link-up.
Imagine a black attack at h or i.
Please note the usefulness of positional strength, i.e.

Indeed, as Dieter suggested below, a black stone at g surely prevents a white escape and enables Black to proceed at

I think it is this possible danger which makes 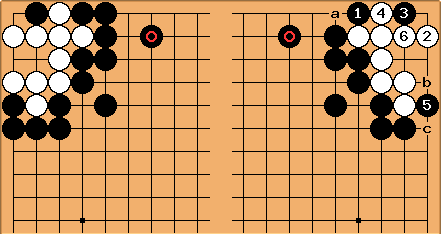 now (the move in discussion).
Black could rest the case for now.
(a

is present here)
If later black a and white b - black c are exchanged, white is left with 5 points.

RichardHunter: A Japanese book I have says this

also lives but is thin. The reason is at both b and c are sente, which is not the case if Black plays the 2-2 point as above.

Bill: I set up a difference game, but the advantage of the 2-2 is not so clear to me. 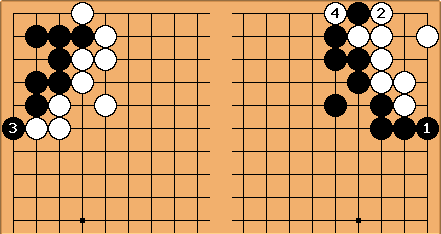 threatens to kill, but

protects the group. Now Black would have an advantage if he could play

with sente, but White plays 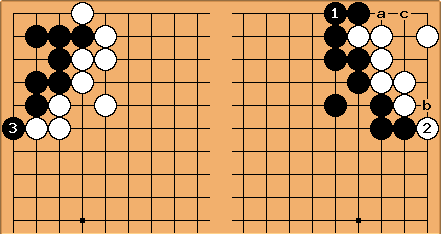 tderz: Black rather does something else (e.g. dia [14]) than descend to 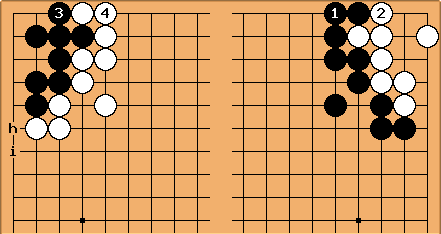 returns to equity, no? Does Black have better than

tderz: These are two separate questions:

This is not a likely sequence, because Black has no killing follow-up if White were tenuki-ing with

tderz: I was not aware of the term/concept difference game when I used your 2-in-1-diagram, I just liked the lay-out of it.
With regard to your It's the only game in town.,
I am too interested in the best variation,
which still might depend on factors not present in the diagram, see your [16].
What I am comparing here, is the right side with the right side of dia [11].
Sorry, if I gave the wrong impression of misusing difference game diagrams.

Bill: I did not notice until your comments that the link to the difference game page had been lost. I restored it. :-)

in dia [11] above. My reasoning is explained below in the ko variant which is life-threatening for White. The final answer to the question to which one would be better (sagari-

here) lies in any actual game position where these positions would occur,

Bill: Except for questions of kos and threats, if one side is better in a difference game, the corresponding play is better. The difference game will tell you when whether one play is better or not depends on the whole game position. tderz: I took the freedom to emphasize your correct statement. I fully agree. Bill: I wrote that late at night, and didn't write exactly what I meant. I think you'll still agree, but let's talk on the difference game /discussion page.

i.e. which side is the bigger and/or more important one for black (top-left or below-right). 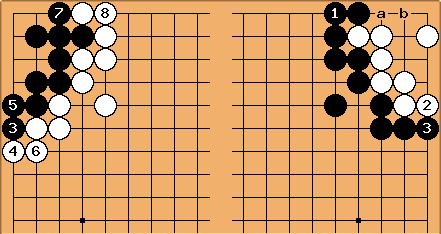 tderz: The left corner has 6 points, the right corner will have most likely only obtain 5 points. (I just realized that Black had an extra move)

This is a definitive loss of 1 point.
The life-threatening exchange black a, white b is at black's deliberation.

, then the extra weakness of the corner comes into play: 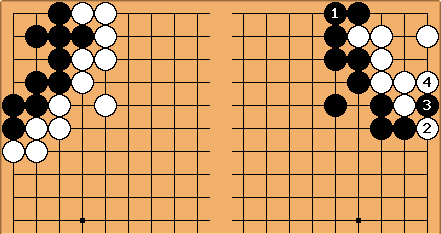 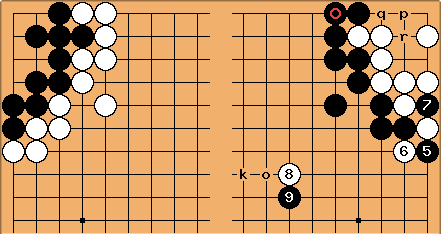 tderz: Black could play freely, White had to fear death by p- q-r 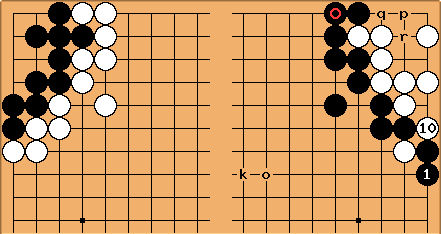 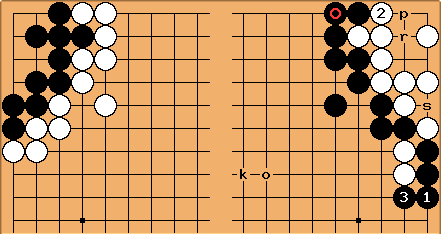 The evaluation of this outcome seems to depend much on the overall position:
Black has played an extra move

,
White has got 5 points + a captured prisoner at s,
Black's position is reinforced.

Conclusion: no clear answer from me :-) ,
except that I find this variant better than dia [11] above. 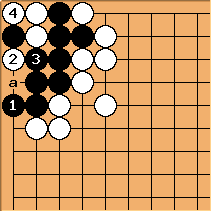 here, White makes a bulky five inside Black's eyespace. Black can not play at a because of shortage of liberties. What I said is wrong !! --Dieter

Dieter -- black will not play at a, but capture -- white 4 is a snapback. I still see this as black lives. Dieter: Yes I noticed, but didn't have the time to re-edit my stuff. Hence the exclamation above. 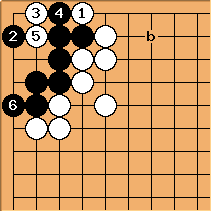 Bill: How about B 6? Dieter: see above (though you were first). Maybe a white stone at b is appropriate to prevent escape. WRONG. Needs edit Dieter 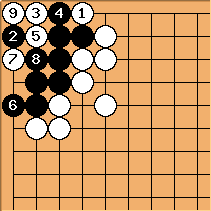 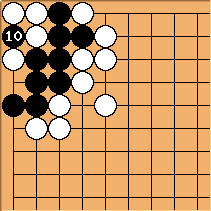