Richard Hunter Thank you John for a fascinating explanation. I might just mention that orikiri?, amongst other words, was put into the 2001 Almanac at my request. I'm not a Japanese language expert. For that, I look to you, John Power, and Jim Davies. Jim did most of the hard work on the Almanac glossary.

John F. I'd like to make a general comment sparked off not by this page but by the one on [Sagari Tesuji] (now descent tesuji), though it seems to belong here as this is the definition page.

Terminological inexactitudes abound on SL. Sometimes they give rise to useful discussion. Most often they don't but stay there to mislead future readers.

Problems can arise whatever the language of the term, but it seems to me that the main problem arises when someone posts a Japanese term. This is a special problem because so many terms of Japanese origin are now used by western players as quasi-English terms, but either with different meanings from Japanese (e.g. yose, fuseki) or with a different range of coverage, e.g. hane ... and sagari.

The example shown in Sagari Tesuji is not usually called sagari in Japan. It would most often be called orikiri, sometimes sagarikiri (oru is another way of saying sagaru). Indeed, the usual Japanese definition is telling: it is a nobi towards the edge. This tells us several things. One is that it is really a mistake to call a nobi a push, as some people do, but also that what is in the Japanese mind is a space for a stretch, i.e. ordinary sagari does not usually get used for a move onto the first line. This is where the -kiri comes in: end, limit.

Bill: I wonder if we are seeing an example of language change. In my own library, which is mostly 20-30 years old, sagari is commonly used for descents from the second line to the first. In a quick look through Sakata's Go no Tesuji to Zokusuji, for instance, I found several instances where sagari was used, and only one different term, saegiru (to cut off), which I doubt is a go term. Perhaps the use of orikiri has become more common in the past generation.

The above is now my suggestion for one way a new term could be introduced to SL to have long-term reference value. The key points are that, at the end, if not too exhausted, a new reader of almost any grade should be able to answer yes to two questions, irrespective of the personality of the contributor: Do I understand this definition? Do I trust this definition?

HolIgor: I've checked with the Japanese books I have. 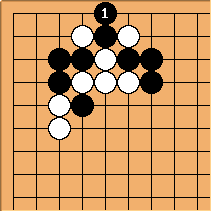 Sagari is a term that I learned here in SL. I've learned to read a little bit Japanese afterwards. And the Japanese terms I met here were useful because they are easily recognizable.

Now, what is a descent? 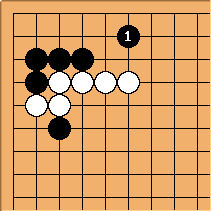 A slide is also a descent.

Charles Well, no. A descent is like going down in a lift (elevator). A slide is an extension down to the second line. I'm fairly neutral on the question of misuse of Japanese terms when there isn't a major conceptual point. Anyone can still use sagari. But I regard the English terms as the default, in cases where there is an adequate translation.

dnerra: As a native speaker, is it immediately clear to you that a descent could not mean a one space jump towards the edge?
The intent of my question is of course: When both the native and the foreign word need explanation before they can be used without misunderstandings, it is my feeling that is generally better to use the foreign word. The foreign word has the marker in front of it: "This is not necessarily what you think it is unless you have verified its exact meaning." It's an old debate of course (maybe less so in English than in other languages).

That is, given that there is a convention in go about up and down, you still need to acquire some usage for phrases like jump down (left) and extend down (right), as well as descend and slide. But it seems quite logical, really - more like descending to the underworld (Orpheus), though you can also descend a mountain just to get down to the bottom again.