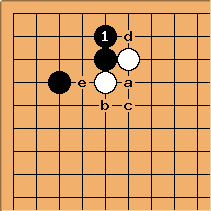 is a move invented by Kitani Minori?, but has since then been adopted by many professionals. Standard answers are a to d and tenuki. White e is not recommended. 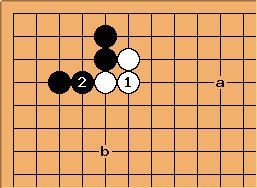 If white connects solidly with

, black also solidifies his position with

. BQM 457 shows white's possibilities if black fails to do so and tenukis instead. After this white will often tenuki; local continuations include an extension around a and going for the center with b. 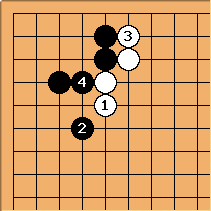 was supposedly first played by Go Seigen. The original sequence continued with an immediate

, but this sequence seems to be most common nowadays. 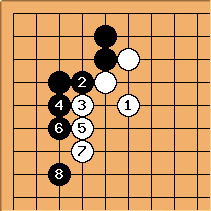 As far as known,

was first played by Takagawa Kaku in 1953, but it has not become popular. 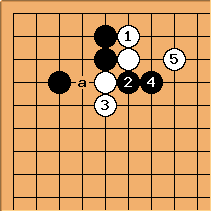 , black answers at a we get the same result as in the nobi variation.

leads to a more fighting joseki. The variation has not been played often enough to cristallize a joseki after 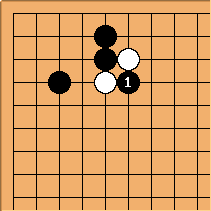 If white plays tenuki, black can take control of the position with

. There is no particularly good continuation for white, so usually she will again play tenuki. 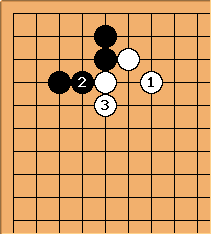 is not seen in professional play. The difference between this diagram and the one above for the solid connection is not big enough to legitimize the spending of a full move. 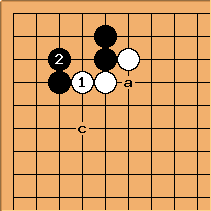 is a kind of thank you move: White is forcing black to straighten up his shape. In the original position white has the cut at a to worry about, but once that is resolved, the black corner will have bad aji. Notice that in the joseki variations here, black will often play at

to alleviate this aji. If white plays

, the cut is still there, but the aji has gone. After white has in some way or another protected the cut, black can play at c without having to worry about his corner.