Here, the eyespace has three on the side, but in the center or with two on the side the implications are only better for White. The vital points are b and w and they are miai for life with six points.

lives via a or b: If Black plays one of them, White responds at the other.

would only threaten to make seki rather than to kill, and would be Black's last threat here since White's reply would be at

makes miai of a and b for Benson-life with six points. Accordingly, Black only has one more ko threat here. Furthermore, that threat is just to make seki rather than to kill. 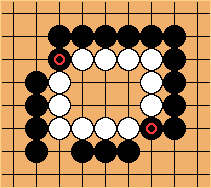 There are two cutting points (induced by

) in the otherwise ordinary looking rectangular six. Notice that one of the two chains has no outside liberties at all.

The status of this group is actually unsettled. If Black plays first, White can be killed. The Chinese calls this 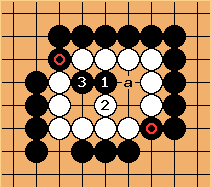 Black can kill by playing the placement at

and then cutting at

. Owing to shortage of liberties, a White move at a would be self-atari, so White can no longer form two eyes. 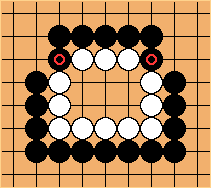