Dieter: I have removed the example for which there was consensus it did not really fit the idea and added the below mentioned examples as references. This renders the numbering of below discussion faulty and also sums the discussion up, I hope.

Bill: Not at all to disparage your ideas, but at this point this page seems so personal to me that I think it should be a subpage of your home page.

kb: It's my first try of a rewrite, WME or whatever you want to call it - I'm aiming for transparency. I'm happy to revert back to the original page, but I'm trying to grab the essence of what the other pages that reference this one describe. What would you suggest? (Or, rather, just change it where you see fit)

Herman Hiddema I think its a good effort, the page could certainly use a WME. I think the first example is good, the other one (labeled example 3, for some reason) is not. The idea, as I understand it, of "kikashi before defending" is to play kikashi that are:

So the reason you play them is that they are now virtually guaranteed to be answered, because the local situation is hot, and thus you get to gain locally for free.

So the first example is great. Both 1 and 3 are not required for defence because

will work regardless. But both, if not answered, make defending at

unnecessary. They may not be answered later (if black is already alive, there may be bigger things than responding) but do gain locally (causing bad shape, leaving aji).

In the second example however, the kikashi played are required for black to live, so fail on the first criterion.

kb: Herman, thanks for your comments. I agree with your comments given your criteria, but I don't think that "playing kikashi before defending" means to strictly play a certain kind of kikashi - I think it means more of the general concept of playing forcing moves that gain something in an area before taking gote to defend, connect, live, whatever in that area.

Maybe you are right that Example 3 is not good because the kikashi there are strictly "required for defense", but that is in the context of the gote move being a move enabling life in the corner. In complicated fights, it is sometimes necessary to play kikashi, such as pushing moves, before connecting stones together, which seems to run in the same vein.

Maybe my comments aren't making any sense. It would probably do to have a diagram of the last point.

unkx80: I created Beginner Exercise 275 on the fly. Perhaps this can be seen as an extreme example of play kikashi before living, i.e., playing kikashi to save one group before living the other group. Or perhaps not, because it possibly fails the third criterion.

Herman Hiddema: I think it fails criterion 1, because it is required for the life of one of the groups involved.

Here is a simple example of what I mean: 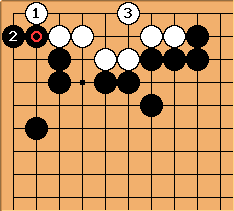 Bill: I questioned whether the original page was an actual proverb. I have been reassured, and am willing to accept it as such. The new title, I am sure, is not. It is more general, and therefore, IMO, more likely to be misinterpreted by amateurs. (Both formulations are false without qualification, but we do not expect proverbs to be without exceptions. :)) Nor would I interpret it as kb does. But I think that kb's ideas are worth considering, which is why I think they deserve a page of their own.

unkx80: Bill asked for a real example. Here it is:

Bill: Great example! Many thanks. :)

kb: @Bill- Sure - this is a generalization of the idea, and may not be an actual proverb anymore. If no one objects, I can talk about this on a separate page and put just the "living" examples on "Play Kikashi Before Living".

Bill: Hi, kb. I hope I have not come off as too negative. I am glad you initiated a rewrite of the kikashi before living page. It really needed one. :) Hmmm. I wonder if the example on the kikashi page of the Cho-Yamashita game would be a good example for this page?

To kb - Thanks for your work, and I hope you don't mind people inserting comments into your WME right after you "completed" it! SL is not Wikipedia, so things work somewhat differently. =)

To Herman - your criteria include "Not required for defence", but you might need to qualify what you are defending. It would be easy to come out with an example, say, before living, you make a peep, and this peep conveniently defends against a ladder elsewhere. I think it might qualify as "kikashi before living", so where do you draw the line? (BTW, I personally don't really like to debate on linguistic issues, because a good part of language is inherently ambiguous.)

Herman Hiddema: The 'defense' I am referring to is the same one that is in the title. So if you play kikashi before defending "X", then my criterion is meant ot imply that the move is not required for defending "X". This is why I considered the second example bad, because the kikashi played where necessary to defend the corner.

By the way, do you guys consider the first move of the solution of Xuanxuan Qijing Problem 169 as "kikashi before living"?

kb: What a problem! Yes, this is definitely a kikashi. Herman, I'm sorry to keep pestering, but what do you use as your authority for the criteria you have specified as qualifying a move to be a kikashi?

Herman Hiddema: Note that I only consider these the criteria for when the proverb "play kikashi before living" applies, not as criteria for kikashi in general. My authority in this is just my own understanding of the proverb and the way I apply it when playing. This is why I interjected "as I understand it" before introducing these criteria. Matthew MacFadyen gives the following list:

Similar, but different. The first and second of these are similar in effect to my criteria 2 and 3. The third one is related to my number 4, you only want to play the kikashi if you possibly gain something by it later, not if it removes aji. And I think criterion 1 is somewhat implied by the word "before" in the proverb. To me, the before implies that you could live "now", but play some other things "before", then live anyway.

unkx80: Actually my own understanding is more or less in line with Herman's and Matthew MacFadyen?'s (on the article in BGJ 65), hence I also don't think example 2 on the main page is a good example. My only beef is on the interpretation of Herman's #1 - I am rather curious why Beginner Exercise 275 was rejected based on #1 if "X" refers to the corner group (although I am not saying that Beginner Exercise 275 is necessarily a good example).

unkx80: Good! I see that we have a common understanding on this. =)