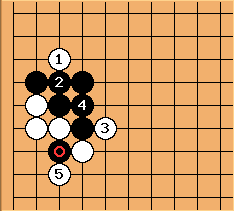 Alex Weldon: I believe this is correct. White wants to capture

to save her three stones, but to play

immediately is poor style. The proverb is play kikashi before living, and this is the purpose of

. Either of them, if ignored by Black, would allow White to rescue her stones, while still having some intrinsic value if answered. Black is then essentially forced (at least from the local standpoint) to connect at

. Then White comes back to play

Order of moves is very important. If White played

would no longer be forcing, because

; Black could resist kikashi?. Also, as I said, White must play kikashi before living. After

, the three White stones have already been saved, so it is less pressing for Black to answer the kikashi. If White lived with

first, and then later tried to play

, there's a chance Black might just ignore the move, if plays elsewhere on the board are larger.

as well, why doesn't black just play it instead of

Agilis: I'm just around 19k but perhaps it can go something like this? A trade, but who's better off? 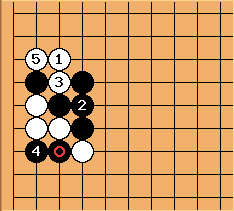 , White is better off. Black has been cut into two weak groups.