Does kikashi gain nothing

The proverb says that sente gains nothing. Kikashi is sente, but, unless it is aji keshi, it certainly seems to gain something. 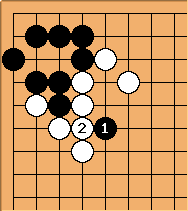 is called a kikashi without loss?. It may be tactically useful, doing work as a ladder breaker, for instance. If it is not played before the ladder develops, it may be too late. Unless

is needed as a ko threat, it is always at least as good for Black to have played it as not. Doesn't playing this kikashi gain something?

The value of kikashi, unlike that of plays in other situations, cannot be reckoned as so many points. On the one hand the work done may be worth a mere fraction of a single point; on the other hand, a kikashi stone may later come to play a decisive role in winning or losing the game. In any event it is a subtle matter.

Sakata is aware of the fact that, considered as sente, kikashi gains no points, except in preventing loss of points by reverse sente. Rather he values kikashi in terms of work, that is, in terms of its relation to the rest of the board. A kikashi is not independent.

Given that lack of independence, kikashi cannot be evaluated per se, as a rule. For instance, consider the advice to play kikashi before living. There are many cases where a move is sente because it threatens to make life for a group, but would not be sente if the group were already alive. It is almost always right to play that move as kikashi before living, and doing so gains points by comparison with not doing so. (Because not playing the kikashi is a mistake, it is better to think of the mistake as losing points by comparison with correct play.)

However, theory gives no points to the kikashi because theory considers the whole sequence of play as a single unit and evaluates the sequence. The kikashi is just part of a reversal.

A familiar form of reversal is the hane-tsugi. It is possible to think of

as sente, but we really just think of

as gote. The hane-tsugi gains 1 point. We do not talk as a rule about how much

gains or loses per se.

So the real response to our question, Does kikashi gain nothing? is That's the wrong question. As Sakata said, the value of kikashi cannot be reckoned in points, because it is not independent.

Going back to our original kikashi without loss, it does seem to have a certain independence. It is not clear, as a rule, what other possible specific plays it will be relevant to. It is this quasi-independence that enables us to think of it as sente in itself, without concerning ourselves with other plays for the moment.

Given that quasi-independence, it makes sense to consider kikashi as we do sente in the theoretical sense, and say that it gains nothing. We can wait to play kikashi until it threatens to disappear or until we need to play it as part of a sequence of play. It is the latter possibility that distinguishes kikashi from theoretical sente, but in that case we can still consider that, like cashing a check, we are simply getting our due. Instead of thinking of the kikashi as gaining something, we think of not playing it soon enough as losing something.

Charles Well, if you get analytical enough, best play never gains you anything; but dropping below best play loses some 'equity' in the game (changes the margin after following best play in your disfavour). But as we generally have no idea what best play consists of, this isn't too useful.

What is more appealing is the strong-player intuition that kikashi/answer is best play for both, for certain extended intervals of the game. That is, in certain positions it should be best play for Black to force White, right now, and after some further exchanges elsewhere, up to a certain point which is the 'last chance saloon' for playing a certain kikashi (so that not to play it right then loses points). There is no particular abstract reason that the timing issue should be like that. Game commentaries tend not to make a big deal of this (as if it is a pro prerogative to have an opinion about the timing).

Bill: Well, in the traditional go theory of play evaluation, gote does gain something before the dame stage, even if it is correct play.

Charles And the traditional theory is particularly confusing. Certainly expecting it to evaluate middlegame plays is, what, a triumph of hope over experience. I think decent amateur players do have the intuition that treating something as kikashi, when it should not be, is a loss. That doesn't contradict what you say, of course. It just means that relatively deep reading and judgement are involved; as well as the Sakata point, which is that kikashi are locally forcing (if at all) but globally effective plays; as you rightly point out.

Bill: Perhaps more than any top pro, Sakata played kikashi early. His quote indicates that he thought about how to reconcile that with the fact that kikashi is sente, and as such gains no points. That being so, what is wrong with waiting? (Takagawa did.) I think that his idea of valuing kikashi in terms of the work that it does is an excellent way of looking at the question.

Charles Maybe so, from a theoretical point of view. I have certainly heard deprecation of Sakata's approach, though that is directed at those trying to play like him, not the great man of course. (Contrast with Ishida Yoshio, another rationalist in his approach, who was openly criticised, for example by Iwamoto). I wonder what the Korean take is on this.