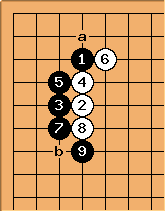 begin the avalanche joseki, and when Black continues with

we get the large avalanche.

To avoid these complications, White can play either a or tenuki with

, or Black can play either a or b with 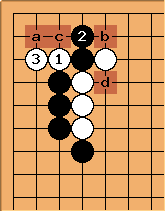 In the large avalanche,

are all forced. Next, Black can choose among a, b and c. Here a is the oldest variation, b is newer, and c is most modern, having been introduced by Go Seigen in a 1957 game against Takagawa Kaku. As of 2021, the turn inward at c is the most popular variation while the turn outward at b largely disappeared from 2002-2014ーwhere after it received a slight reinterest from Chinese professionalsーand the cut at d received development from 2005-2007.

See for the follow-ups: