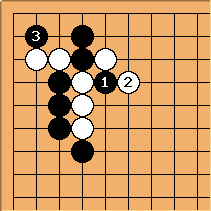 Black 1 is a recent development in the large avalanche joseki. As far as I (or rather the GoGod database) know, it was first played by Li Zhe in August 1993, and it did not get popular until ca. 2005.

invariably follow. Usually when black plays this way, he has some stone or stones, but not thickness, in the lower left. 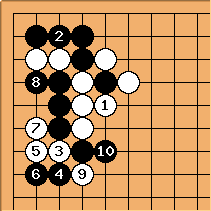 After the previous diagram, there are a few variations, but the sequence in this diagram is by far the most common.

removes the aji of black's sacrifice stone, but now black has got an extra tempo to fill an extra liberty with

, so that he can resist

with the combination of

, capturing the stone. White adds two more stones to her sacrifice, then cuts at 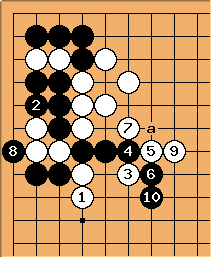 A few moves have been tried for

, but this one seems to have become joseki. White threatens to capture black's two stones, so black plays

to keep the white stones captured first (jumping out gives white the chance to squeeze the other two stones much more efficiently). White then attempts to cut the black group off from the center with

. Black will usually cut at

, but a and tenuki have also been tried. At the end of this diagram, black has two stones floating in the center, but white's three stones are without a base as well. If, as usually is the case, black has some support further down the left side, the white stones are quite weak and therefore the black ones are not as weak as they seem.