This is a strange joseki from a game with jsha on NNGS. I would like some comments from someone who knows what they're doing. 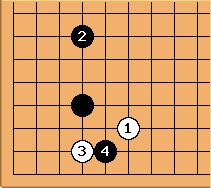 I was very surprised by 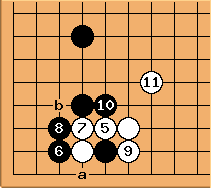 I wonder whether I should have played

As it turned out, Black ended up losing the corner.

at b? Play around with it. 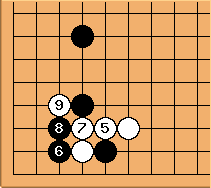 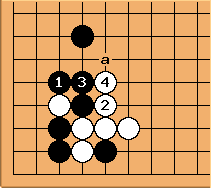 captures in a capturing race. 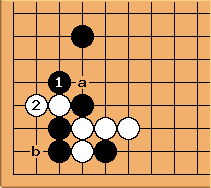 Now what for Black?

Jasonred : I thought the same thing! (that's what I would do here). But then I read his line about the capturing race, so I thought, oh, that's not so good, I must have misread it.

Bill, could you read out the sequence for us?

Bill: Hint: White threatens a and b. 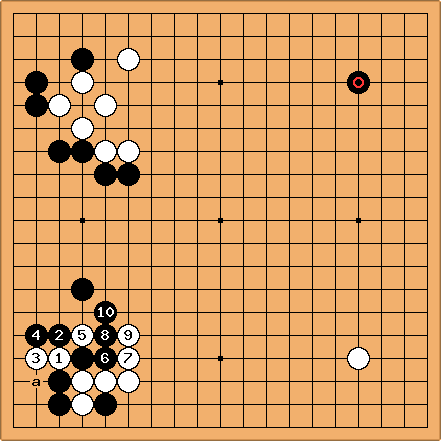 Black's marked stone in the top right breaks the ladder, so White does lose the capturing race. However, White can still get a local advantage. First, she adds a third stone (White 5) as a sacrifice.

here? Black is unlikely to answer at a, early in the game.

Bill: Oh, I don't know about that, Charles. Which do you prefer as Black? 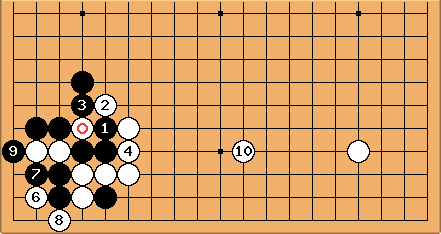 . (This squeeze is better for White than the suggested sequence.)
(Note: I am afraid that I have committed the same sin that yose books do.

is out of order. It is White's sente, so we assume that it gets played, but it is only worth 7+ points, and will wait. White should play at 10 first.) 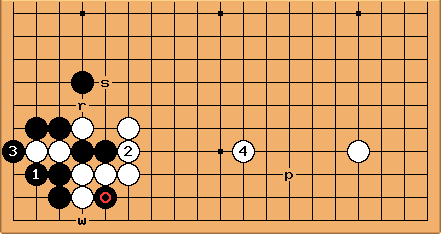 secures the corner and halfway saves the marked stone, but is not as strong towards the left side.

at p and invite Black to treat the lower side as a fighting area (rather than open-skirted). That way White's moves like r or s might come into the game. I don't suppose it's a case of absolute judgement here.

Bill: Well, considering Black's strength on the left side, I think that the cut is premature, anyway. :-)
I had rejected the - what do we call it? Semi-net? -- because of option 2. But on reflection, I think that both options are better for White than the one I suggested. Thanks, Charles. :-) 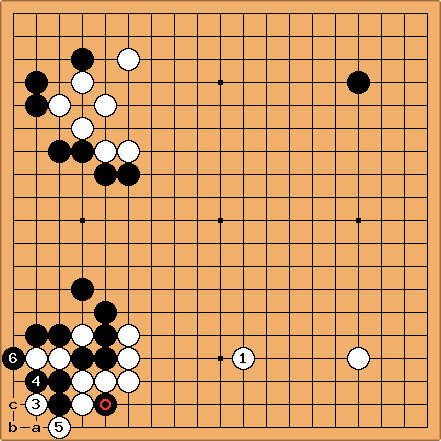 White's corner stones, having eye-shape, do not require an extension, but

is a good play.
Later,

is sente. (So we assume it gets played.) Still later, Black has a throw-in ko with Black a - White b, Black c, but the black corner is overconcentrated and the marked Black stone is mochikomi. Still, the immediate cut is somewhat doubtful, as aji keshi. 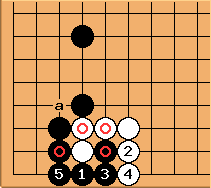 I think White should extend along the lower side after

. In effect, Black will have exchanged the

ones. White's gain in thickness is worth much more than Black's attempt at enclosing the corner, especially because of the cut at a. Any black attempt to save the stone will only be welcomed by White, since it means that Black is taking gote again for just a few points. Furthermore, the sequence

also gives Black a shortage of liberties, making the cut at a even more dangerous - Andre Engels 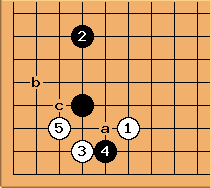 I think it's probably a mistake to try to cut

off at all. How about Wh5 here? If Black now plays at a, White slides up the left side to b. (If Black blocks at c, of course White plays a and 4 is captured.) This depends upon how important the lower side is to Black, but

has aji in any case. Andrew Grant 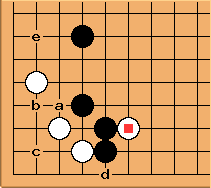 This line might be useful for White on occasion. But isn't it rather a thin way to play, in general? Black has in reserve the threat of Black a, White b, Black c. That has consequences, for example for Black closing off the side at e: it looks like White will want to play at d, and 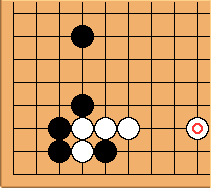 as extension? Of course it depends a bit on the overall position. But I don't see this as a real victory for Black. Charles Matthews

DaveSigaty: What was the overall position?

Migeru: Gee, Dave, do you want to embarrass me (and possibly jsha) with my (our) fuseki of 8 weeks ago? My guess is that I was just going through the motions: approach-slide-extend. 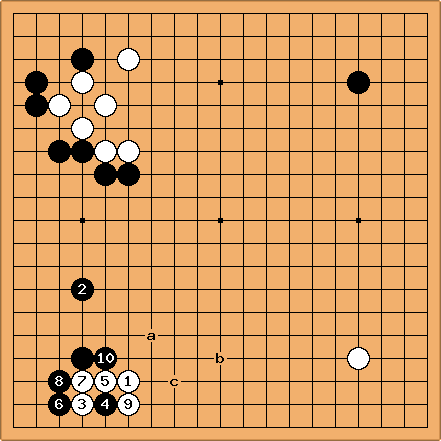 Dave: No need to worry about embarrassing yourself. If we are not embarrassed about something in each game we play, we just haven't bothered to look at it honestly yet (at least this is 100% true for my games :-)

I was kidding, of course
I wasn't, unfortunately :-)

With the upper side wall,

is a nice attempt to squeeze a little extra out of the position compared to a "normal" one-space jump for example. At the same time it is inevitably thin. White should not be eager to cause Black to strengthen this position. Therefore instead of the slide at

, White might have simply played b. This indirectly exposes the thinness of

-b position Black normally looks forward to invading at c. If he does so here, however, his thin position on the left will be threatened more by any thickness White builds in the center. He may come to wish that he had played the stronger one-point jump instead. 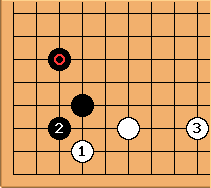 Black ends up overconcentrated. In current professional play, Black will often play tenuki instead of answering at 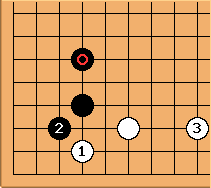 There is debate in modern practice over whether White should exchange

although this was considered completely natural in the past. See changing fuseki dogmas 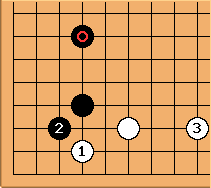 This undoubtedly fixes up the thinness of Black's initial play. 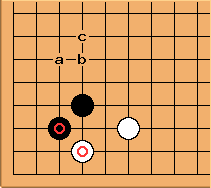 Looked at differently, if

were already on the board, where would Black prefer to play next: a, b, or c?

Since Black should be happy to answer the slide with a play at 3-3, was the cut at

in the original diagram an overplay? What was the result?

It seems to me that White can be satisfied with this result. Since there are still defects in Black's left side, I would be interested to know whether you were able to invade the left later in the game. 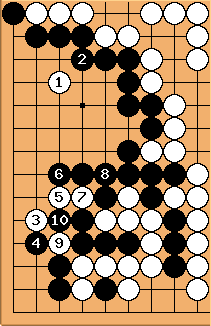 I was just playing kikashi to try and live... and I got a snapback out of it. 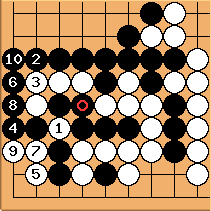 White 11: I was too busy setting up a snapback in the upper left to see that I needed to protect against Black 12 at