Much of what one reads about the early fuseki has more than a slight flavour of regurgitation of today's favourite guesses with quite a bit of post-justification. For example: 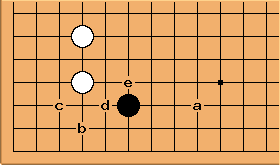 The ikken tobi joseki. If Black now wishes to occupy point a, the books of 30 years ago told us rather dogmatically that it was compulsory to exchange b for c first, otherwise (after Black a) White will exchange d for e and Black will be "overconcentrated". Someone was agonising that the black extension to a would be better one point further away now.

Today's advice is usually that Black's exchanging b for c is a loss because Black loses the 3-3 invasion, and that (after Black a), White's exchange of d for e is a loss, since Black is strengthened and the 3-3 point is still available to Black.

That is relatively simple, and yet pro thinking about it has changed radically in the last 30 years. There are many more such examples. So how are we to know which of today's theories will be overturned in the next 30 years?

The author of a recent book on fuseki says something like this in the introduction: studying joseki in all their variations is a good way to improve; but the best way is to study simple variations in their possible locations in whole board positions.

If this is to be taken seriously, rather than padding to keep the publisher happy, it does suggest some benefit in a 'modular' approach (see Modular Thinking). We can't really wait until all the verdicts are in on joseki before making a fuseki theory. What 'they play' currently can be picked up from pro games. Unless some decent principles can be extracted from the current set of normal ideas, we have to abandon the whole project, don't we? After all, if some killer line of the taisha were found we could never again tenuki the low approach to 4-3 ...

This doesn't resolve Simon's difficulties. It's a way of saying we have to live with them. In fact since Chinese pros, Japanese pros and Korean pros don't necessarily see joseki the same way, it's all got much worse recently. These grey areas will proliferate.

I think that it is the "thinking" about moves and play that is important, not the exact thoughts - since that changes over time. --Jon Diamond

The key word in my rant was "dogmatic". Of course it's nice to be able to read about what top professionals are thinking at the moment. The trouble arises if we're told that this is the only way to think about it. It's worse when there's an appeal-to-authority going on, as is often the case when we actually have an amateur writing anonymously but publishing in the name of a top pro. --Simon Goss?

I do think things are getting a little better. Amateurs are getting a little less dogmatic (if you find that hard to believe, you weren't around in the 1970s, when the tenuous foundations for some very arrogant opinions had to be heard to be believed). And we are getting more of the real pro doctrine. For example, much on the 4-4 point used to be told to one about the 4 kyu level (handicap go stuff); after Kage's Secret Chronicles we understood sanrensei at a shodan level; and one can pick up bits of 5 dan level stuff now here and there (an old Go Review says my favourite 4-3 contact play, outside hane line, is far too hard for amateurs). --Charles Matthews

I think you are over-stating your case in your example. The b-c exchange is still considered a quite valid joseki, and actually as far as I can see still more common than Black a. But your main point remains of course, that Black 'a' is now seen as perfectly joseki, whereas it was considered bad until just a few years ago.

Still, I think there is little that can be done about this problem. We amateurs often simply do not know whether or not a certain line is good. I can tell of a 10 kyu's quasi-joseki whether they are good, reasonable or bad by just looking at it, but for my own mistakes, I will have to get a stronger player's opinion to tell me what could be improved. And in the end that will mean taking over professionals' advice. The professionals themselves are not able to distinguish which part of their knowledge will be told unchanged for centuries to come, and which part is going to be overturned in the next ten years. So how would I know?

I have been playing Go for six years now, reaching 1 kyu, and the more I play - and the stronger I hopefully get - the more I realize that I have been caring too much about fuseki and too little about technique. If I am going to study anything in the forthcoming year(s) it will be tsumego: connect, live, kill.

Why is this ? Because, the higher ranked I get, I would have expected early mistakes to be more decisive to the game. Nothing is less true. Recently, in the Belgian Championships, I was playing a 3 Dan. A tenuki to his endgame play, made him believe my group was alive, and we continued the endgame. We both misread the status of the group and by accident I secured it with a play I thought to be 4 points gote. I lost by 1.5 points, for the record. These ridiculous events should make us humbly realize that we, amateurs, are taking fuseki far too seriously.

While one has to know strategic principles in order not to get smashed by a strong player, the a-b-c-d-e-f line above should not be worried about until professional level. Joseki mistakes can make a difference of a few points. Fuseki mistakes give only a feeling of superiority or inferiority. Shape mistakes, life & death mistakes, or plain lack of concentration, make a difference of dozens of points.

jfc: exactly! The difference in skill between a Yi Changho and Kobayashi Satoru is very small. Consequently at the top pro levels the players agonize over the most minute differences in fuseki. While the old fuseki analysis given above may be out of date, the consequence of playing old style fuseki can't compare with missing a tsumego tesuji.

Also, if you study tsumego you can be confident that the solution you came up with 20 years ago is still the solution today.

Of course the whole point of playing Go is to have fun. If following the latest fuseki theory gives you pleasure then by all means follow away!

If there is anything to learn from current top pro play, it certainly aren't the new fuseki lines, but that fighting strength prevails. I agree with what Tim Hunt says in AnInterestingPointAboutDirection, namely "It is better to have a plan in the opening than no plan", but if your plan is "I just wait for an opportunity to decide the game by a life&death problem" you could be amazed by the amount of success.

Sorry, would someone be willing to explain to me why the 3-3 point is still available to black after the exchange of d for e? ---- Answer and discussion moved to 4464 enclosure 3-3 invasion.

The interesting thing about Fuseki is that dan players deviate earlier from pro fusekis than single digit kyu players do when you look at Fuseki libaries. It seems more important to understand the moves that you do in fuseki than copying moves that a pro plays. -ChristianK

It is always important to understand the moves you play. If you "understand" moves then you will have a purpose in mind when you play them and some idea what to expect and what to do next. As the discussion at the beginning of this page shows, though, hardly anyone understands moves perfectly, even professionals, since over the history of professional play moves change from good to bad and bad to good. -- Bob McGuigan