PlatinumDragon / Boards that have tengen as best starting move

PlatinumDragon:I have studied GO ratios and found a ratio that defines the lines of territory. This line divide the boards as so:

This is what I call territory line. It is different then the standard territory lines that other players are used to. The influence line is define as territory line + 1. Why is this line so special? This line is special because the player who wins control of this line takes over half of the board either on the inside or on the outside. Usually, the player wants to take the outside because of its higher value and easier defense. By taking the silver instead of the grass, the player takes a dominating position.

Square are influence. No space for territory, White cannot live. 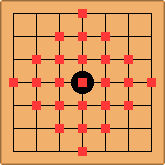 There is enough space for territory in corner. White can live in corner. 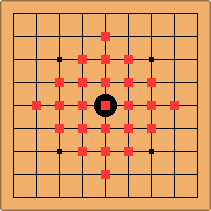 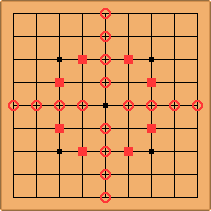 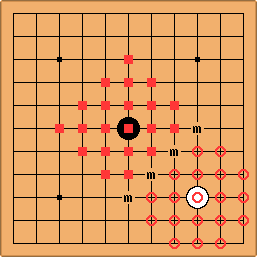 at 3-3 may not be a good move, but it can totally take away the corner. 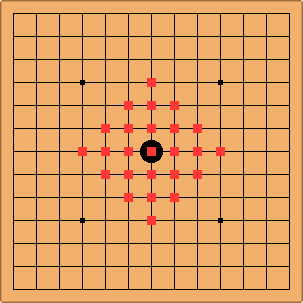 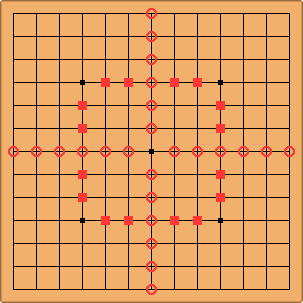 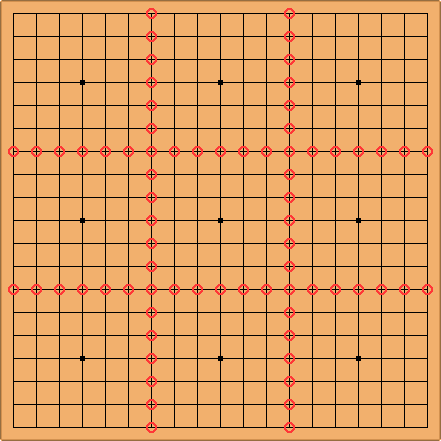 The trend here is to tenuki 10 more stones for every size up.

Most standard Board Sizes are at the top of each "Line Territory".

5x5 or 6x6 for first. This is for capture go and probably Fuseki (game) tactics.

13x13 for second. This is for tactics and probably Fuseki (game) strategy.

19x19 or 20x20 for third. This is for strategy. Any size this or beyond is probably for Fuseki (game) operations.

27x27 for fourth and beyond. These are for operations.

Because 13x13 is large enough for strategy to occur, 9x9 is added. 9x9 is small enough that strategic moves cannot be played.

So in the same sense, there is skirmish, tactics, strategy, etc.