My new prediction is 4 yottahertz processor can brute force a game board of GO.

I a new member as of April 2, 2009. I have studied GO ratios and found a ratio that defines the lines of territory. This line divide the boards as so:

My moves are too inconsistent to be rated a rank. 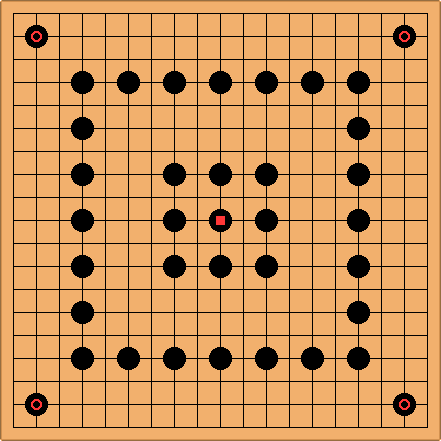 I don't really need the one on tengen. The ones on 2-2 points are because MoGo create living groups at the corners, so I added them. I cannot defend against the 2-1 move which leads to a live territory at the side or corner.

The 3-3 invasion fails with the addition of the 2-2 points. That's because MoGo is not strong enough to successfully do a 3-3 invasion under my arrangement of stones. My stone arrangement takes away all strategy from the game.

This handicap arrangement is a project I use to see the effective stones require to prevent white from forming any live stones. It shows that this 37 stones is about close to the goal.

What Happens When We Combine Area and Territory Scoring

Scoring: Just the sum of both scoring system

Dame = 1 point because you gain 1 live stone. Play in your territory is -1 point.

Since we added the scores of two scoring system, the difference of score is double, so komi needs also be the sum of both system. Komi = 6 + 7 = 13 in this combine scoring.

Because of the situational superko rules, "stones in atari" may be live stones and cannot be capture.