For the Territory Line on a larger board, see the section Larger Boards below.

When we speak of the third line or territory line, this is what we mean: 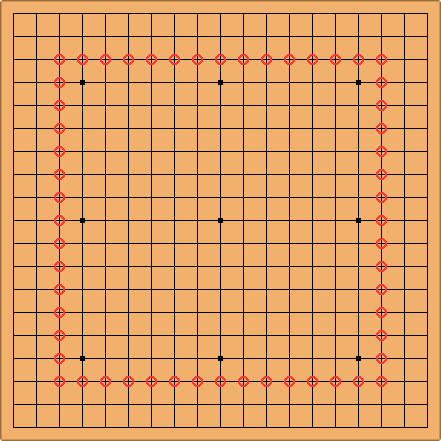 The third line is useful for taking secure territory, and particularly for making the base of a group. For example, it is the usual line to use for a wedge play on a side.

It is also said that "the third line is the line of completion". This means that playing on the third line is usually an attempt to complete a secure shape, rather than develop a big framework.

Territory line is (as of 2019-01-14) a term used but not explicitly defined by Platinum Dragon on the pages Why 19×19 and Large boards. It appears to be used for the equivalent of the third line on a standard 19×19 board, i.e. the line best suited to claiming territory rather than creating influence. The description on Why 19×19 is: