Keshi and Uchikomi - Reduction and Invasion in Go

Keshi and Uchikomi: Reduction and Invasion in Go by Iwamoto Kaoru was originally published as a series of articles in the American Go Journal (from 1981 to 1988).

Published in English by Slate and Shell in 2002 for the American Go Association. Currently (August 2011) out of print. A version in two volumes (Reductions, Invasions) is available in

How do you look at a position like the one in the upper right corner? 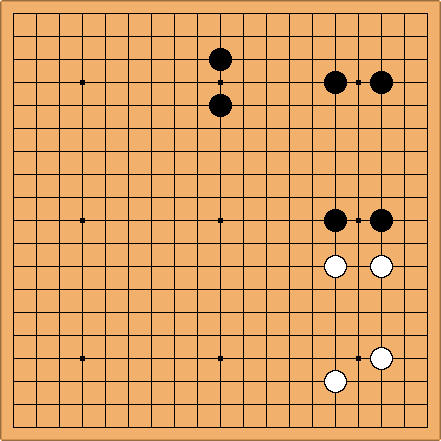 Black got a lot of moves into the upper right, so it is reasonable to assume White got compensation elsewhere. Nevertheless, the question is still relevant. Most of us know how to invade on the 3-3 point under a star point-based sphere of influence, but this case is different. The territory there is very firmly Black's.

Or is it? Maybe there is an obscure corner sequence that will snatch the corner away after all? Or maybe there is a way to minimise the territory that Black can extract from this sphere of influence, and build some position towards the centre?

It is this kind of question that this new Slate & Shell book will address. The book discusses moyo and corner positions broken down into a number of types. This is the kind of approach you will also find in joseki dictionaries, life and death books, and Richard Hunter's excellent series and books.

This 'type' approach appeals to my favourite way of studying. I love to work my way through a catalogue of classified positions, which I can then store in the permanent memory at the back of my head and quickly browse through for comparison/reference in competitive gameplay. Unfortunately I find less and less time for these concentrated bursts of intense study, but that's another matter...

If you don't like this kind of study, you'll like this book a lot less. But the ambitious characters who don't mind investing a few months of hard work in return for a couple of stones improvement, will love this stuff. I'd been cutting my teeth on Life and Death (the book), Counting Liberties, even joseki, but always remained frustrated by the lack of material dealing with non-hoshi based corners. In fact, I'd been looking for years for a second hand copy of Takemiya's Enclosure Josekis to plug this hole in my reference positions. This fits the bill nicely, though. (Having said that, I'm still willing to pay just about anything for Enclosure Josekis, so drop me an email if you have one spare.)

I read the book and I do recommend it. I'm not sure about your method of study. I find that books like that give you ideas that you need to work on and should not be used as a memory bank of positions. It's the same error players make when they study joseki books. Memorizing positions will not help you much. I'm with you on enclosure joseki book though :). I'd love to see a reprint.

Stefan: To clarify - I don't study the diagrams and sequences by heart, if that's what you mean. I do try to synthesize an overview of the various positions with their various ideas, and keep that in mind. As I wrote above, the goal is to use this as reference material for comparison. As you said: like the proper way to handle joseki. I think we're talking about the same thing (or close to the same thing).