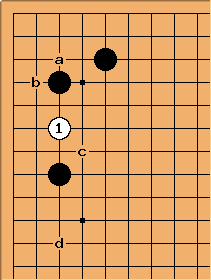 Probe discusses a White move at a.

Kogeima Shimari discusses a White move at b. 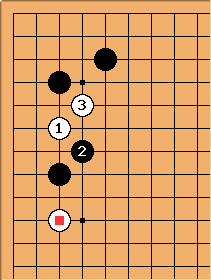 In Keshi and Uchikomi: A Study of Reduction and Invasion in Go, Iwamoto Kaoru, says "In this position an invasion is called for, and the most likely point is

, the best reply is

here. This aims at consolidating the corner, attacking White, and moving towards the center all at the same time. The best White can do is to make a diagonal move as well; all other replies are clumsy and cause trouble..." (Notice

although this seems not to come into play in most of the possible lines discussed.) 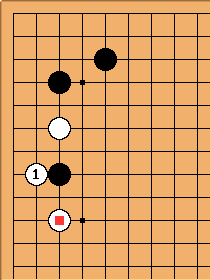 here is important, since it threatens a white connexion at

in this diagram. Black plays the diagonal play to prevent that connexion. If black simply played the one-point jump towards the centre, the connextion at

would still be open. Also, after black plays diagonal play,

will probably be pretty handy in the ensuing fight. Thus the 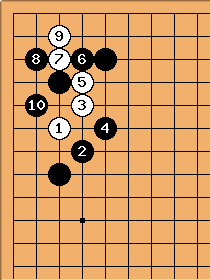 is not so lousy insofar as Black cannot really block it. There are diagrams of this sequence on senseis, but right now I cannot find it.

AJP: I believe that Ishida Akira covers this first sequence in Attack and Defense. 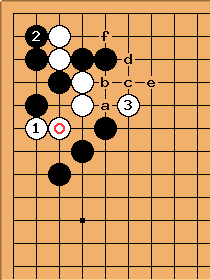 tderz: [30] Because of the cutting aji a-f , White can escape with

Alex: Sure, White escapes, but with bad aji, no eyes, and giving Black at least as much profit as she destroyed with the invasion. I still say the invasion is lousy. 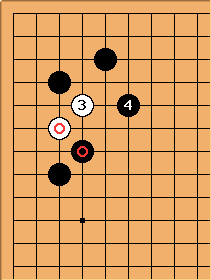 becomes only interesting as to when White wants to make an empty triangle, but eventually, she cannot be stopped getting out. 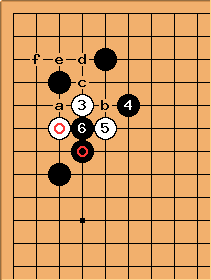 could be countered by

, seemingly threatening both cutting points a and b.
However, White can play a first, threatening to live in the corner by pushing at c (expecting black d, then capturing with White e).
(I find ) things are complicated, because Black could also retreat with e (instead of d) or, if, having played Bd - We, then trying to steal the eye with f. 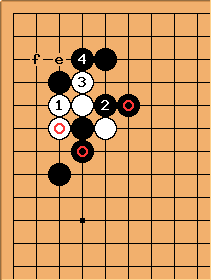 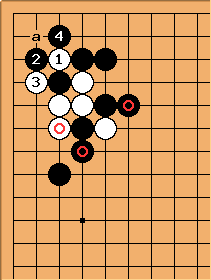 is interesting, as White cannot extend at

, but after the exchange

there rests only a ko at a? Wrong! Of course White could extend at

above, as there were cutting points and 4 liberties. 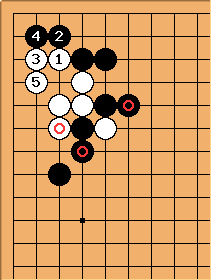 tderz: [80] White would live and the result has to be evaluated in the context of the game. 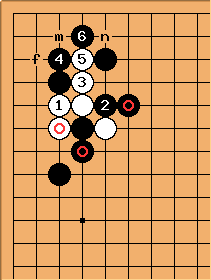 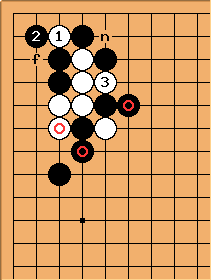 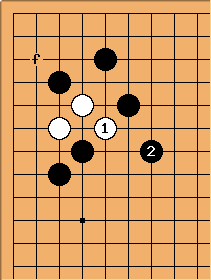 , keima is a normal follow-up attacking technique, don't decide immedeately where to cut, leave the problems to White. 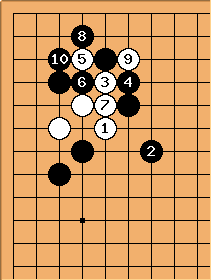 tderz: [120] White has to throw in some cutting stones, feed Black.

, here is the empty triangle, but White is out. 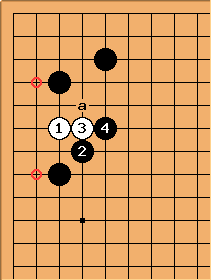 looks too bad to me, hane

is too strong, perhaps in special circumstances...

AJP: again, from Attack and Defense, possible is for white to make a small life in gote by playing the

points and drawing back from each, but

at a is much more promising.

Can you give the whole-board position? The situation on the left side would seem to be of particular importance.

is a lousy enough move that almost anything would be good enough to punish it. The kosumi at c is likely to kill it outright, but you could also just take a relaxed attitude and extend to d... then you're happily settled with territory on both sides and White, even if he jumps out, still has a weak group and nothing to show for it. Your profit in chasing his stones may be more than you'd get from killing with c, since c leaves aji.

dnerra: Alex, I think this kind of statement is non-sense unless it refers to a specific whole board position. With the backup of

can be quite effective in case White is strong enough so that getting any weak group would be a worry for Black there. The kosumi doesn't work as well as one would like due to the weaknesses of the keima. 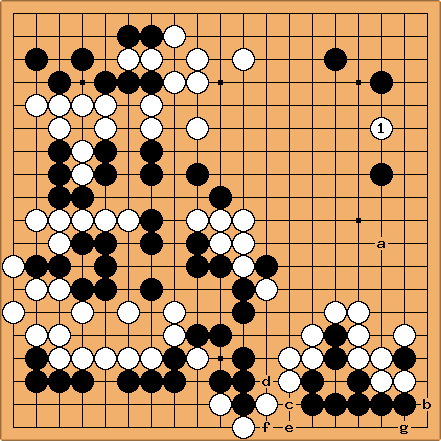 Alex: I'm not so sure White has "lost already." Look at the lower right corner again. I do agree that the extension to a is correct here, and probably bigger than b, but White should probably leave her lone stone alone for now (as tderz points out above, it can't be captured cleanly in one move) and kill the corner with b. Looks like a game to me.

kokiri - does b really kill the corner? Looks to me like the sequence to g gives life, but i'm looking quickly so maybe i'm missing something...

Velobici: In trying to understand how to handle the move at

, I found this board position at GoBase.

was played, as move 130, by Kobayashi Koichi on 14 April 1971 against Cho Hunhyun. 70 moves later, Black won by resignation. 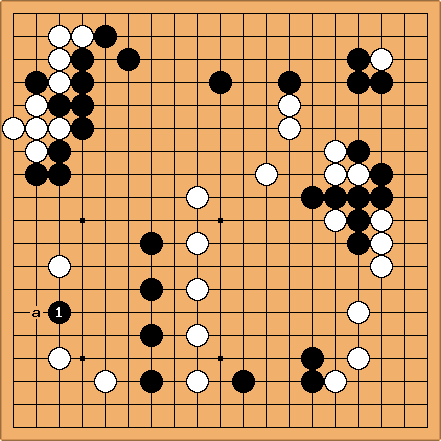 Alex: This situation is entirely different, because Black has a lot of power nearby and White does not have space to make the two-space extension I mention above.

here is not a territorial invasion but an attacking one. Connection should be White's priority, to which end I recommend a. If Black follows the standard sequence, White will connect over the top and build thickness to counterattack the four Black stones.